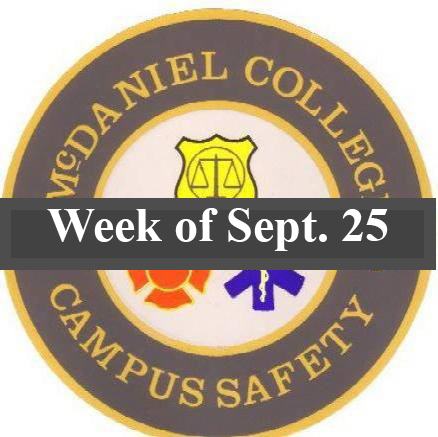 Well McDaniel College, I have to congratulate you all for taking my advice on relieving yourselves in the proper locations this week, opting for toilets instead of parking lots and sidewalks. That being said, you more than made up for it in a number of other areas, so without further ado, let’s get to reminding the world why this column exists in the first place.

First off, remember how back in Kindergarten one of the main rules was “keep your hands and feet to yourself”? Well some people on campus seem to have forgotten this simple yet surprisingly helpful idea, considering there were two cases of assault with hands/feet reported. And so it’s now official: college students are less able to follow basic rules than my six-year-old second cousin.

On the other hand, it seems that interest in harming one’s fellow man is dwarfed by the sheer animosity against inanimate objects, as evidenced by the four cases of malicious destruction of property this week. Now, I can understand the desire to hit another person; I certainly don’t condone it, but I can understand it. But what did some poor innocent car door ever do to you? Did it insult your mother? If you answered yes to this question, well let me just say I don’t even want to know how drunk you were when said incident occurred.

In other news, a small round of applause goes to North Village for not having any cooking fire alarms go off this week. Really, I’m proud of you guys.

As for the Pennsylvania Ave. Folks, I know one-upping the others is always nice, but there are plenty of safe ways to do so. You can throw better parties, win the McDaniel beer pong tournament, or out-tailgate all your opponents. Would you like to know how you do NOT go about doing so? By having an actual cooking fire. Which you did, making North Village look even better for their achievement. Pull it together guys.

Now I’ve been told that in the Rouzer versus Whiteford battle that Rouzer is the more rambunctious hall. But if alcohol arrests are any indicator, they’re in a dead heat. Rouzer had two possession of hard liquor incidents to Whiteford’s one, but on the flip side Whiteford had three incidents involving possession under 21 to Rouzer’s one. I’m calling a tie on this one. There was also a possession incident at the upper lot, in response to which I can only offer a long, drawn out facepalm.

So keep up the good work, McDaniel, and always remember: your poor judgement makes my job possible!

The Lighter Side of Campus Safety: Week of March 1

Making a Difference, One Animal at a Time