In an effort to combat the epidemic of sexual assaults on college campuses, the White House released its “It’s On Us” program Friday Sept. 19, challenging all students to work to prevent sexual assault.

The ad and campaign, which is specifically targeted to young men, features celebrities such as Mad Men actor John Hamm, Big Bang Theory actor Mayim Bialik, musician Questlove and Vice President Joe Biden, among others, who remind the viewers that it is their responsibility to take action instead of simply being a bystander.

The site also asks all visitors to sign a pledge, which it states is a “personal commitment to help keep women and men safe from sexual assault.” Included in the pledge are also four tenets, which ask students to work to prevent sexual assault through everything from spotting situations where consent cannot be given to creating a culture that condemns sexual assault.

The program is backed by The Center for American Progress, a liberal think tank, and has partnered with organizations and companies such as the NCAA, IHeartRadio, CollegeHumor and The United States Olympic Committee.

However, it is not only the White House that has taken charge on this issue; indeed, a number of McDaniel students are doing their part to fight back against sexual assault as well. 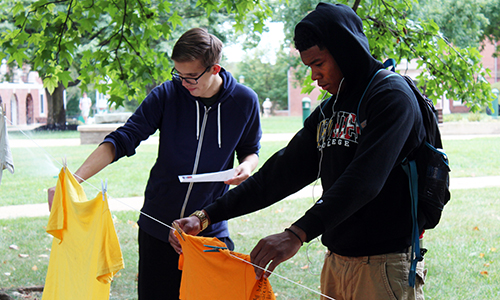 Students have mobilized to create a number of campaigns to raise awareness about the issue, including the posters sponsored by the McDaniel Sexual Assault Prevention Committee that can be found in various dorms and academic halls, which focuses on what committee advisor Erin MacDougall of the Wellness Center calls the “bystander intervention model.” The goal of these posters, she stated, was to “empower students to see themselves as agents of change,” in that through their actions, they can prevent assaults.

Detective Sergeant Eric D. Immler of Campus Security seconded MacDougall’s statements, stating that “bystander intervention can be key to preventing a sexual assault,” and that “If you see a condition that doesn’t look right or someone appears to be in a situation that may need help getting out of…intervene”

The committee also hosted the clothesline project, which aimed to raise awareness of violence in the local community through colored shirts decorated by victims, most of which featured raw and powerful messages.

Other students have gotten involved with poster campaigns as well, such as senior Leigh Brownell, whose “I’ve Seen It” campaign will be in Ensor lounge starting Sept. 30 and will feature snapshots of McDaniel students’ eyes, as well as stories explaining their experiences with sexual assault. The posters aim to remind students that sexual assault is not an abstract crime going on somewhere else, but something faced by the people they walk past every single day.

According to Jennifer Glennan, who works closely with the issue of sexual assault on campus, the poster campaigns are a “great opportunity to educate our employees, our students, and even visitors on campus.”

Resources for Victims of Sexual Assault: