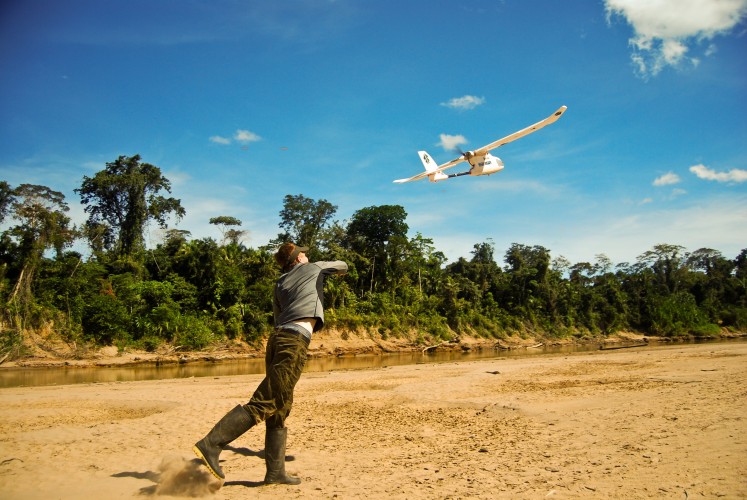 Dr. Jason Scullion has only lived in Maryland for barely a month and he is already making big moves both in and out of the classroom. The Washington state. native is part of the Environmental Studies Department here at McDaniel, and in just a matter of weeks here, has infused new life into this area of study.

Growing up in the Pacific Northwest, he’s adamant about the fact that the scenery there heavily influenced his decision to work in the field.

“I grew up outside a small town at the foothills of the Cascade mountains on the river,” he says. He explains that it was a former timber town which had grown to be “economically depressed, devoid of nature.” He didn’t understand how or why people could be so indifferent to the beauty in the area and how it had gotten to that point. “I decided I was going to do something about it,” he says.

I jumped right into asking him about his trip to Peru this summer. Visiting Peru has become almost a second home to him based on how frequently he travels to and from the South American country. He explained that this time, he took the trip with two University of Washington students who were working on their capstone projects. There project was working with ARC Amazon and a non-profit organization “to help acquire land in the Amazon that’s threatened.” To do this, you need a drone.

Dr. Scullion sat on the edge of his seat and a described how this works. The drone is made specifically to track deforestation; “it has a six foot wingspan, and it takes a bit to figure out how to maneuver it in the Amazon when it needs too much room for flight take-off.” The interesting thing about the drone Dr. Scullion worked on though is that it produces high quality maps. These maps contain a geographical information system and provide a baseline for what the surrounding area looks like. When the drone goes out a second time, it creates a high resolution overlay of the individual trees in the area. Using these two scans together, one can look for discrepancies and deforestation.

Another project he is currently working on is with one of the capstone students from University of Washington. They set 100 camera traps in the Amazon and are trying to understand the distribution of cats.

I asked about his dissertation and his focus on Peru. He answered by explaining that the Amazon Conservation Association (located in D.C.) has a sister program in Peru and that was his first step after his Master’s degree. His first trip to Peru led him to Madre de Dios. “It’s a beautiful area,” he said, “but it’s rapidly changing due to the illegal gold mining, and that’s what I did my dissertation on.” Another issue in this area was the fact that it is so unprotected and therefore incredibly vulnerable. It is referenced as the MAT corridor, and contains “unprotected links” between the national parks in Peru and Brazil. The conservation of this area is vital because the wildlife that live in the Amazon need to utilize it to get from forest area to forest area. 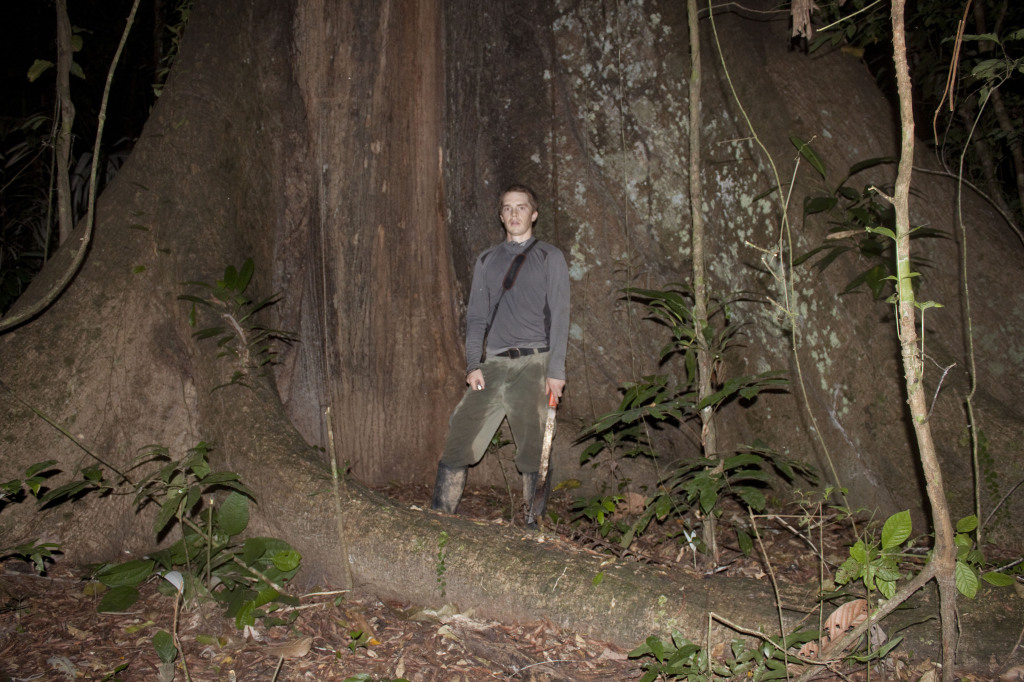 Dr. Scullion Standing Next to a Big Tree in Tambopata

Dr. Scullion explains that right now it is used with mixed purposes. Farmers and indigenous people also use room there. Because it is so unprotected, it is important to identify conservation sites. The area is around 400,000 hectares, or 1,544 miles in size and there is not enough funding to cover it all. So how does he work to develop framework to identify conservation sites? “There’s four steps,” he explains. “Satellite imaging, corridor modeling approaches, future scenario modeling, and camera traps.” The camera traps are utilized in the three micro-corridors to try and come to a conclusion on which of the three is the most important. Dr. Scullion says that he has a field assistant currently in Peru working on this exact conservation effort.

I asked him what led him to Peru. What was so interesting that he was able to vie for a Fulbright Fellowship and later receive it by writing about Peru’s Amazon Frontier? “I did my Master’s in Mexico,” he said. But seeing how the people and the nature were together was less than ideal. “I was discouraged. Most of the forests were gone. I wanted to be part of the efforts I thought would make the most difference.” He emphasized this when talking about Peru, Brazil and Bolivia. These three countries had come together and built the first inter-coastal highway from one side of one country to the other, and it was named the InterOceanic highway. “My first interest was the new change and also the conservation in the region. It is one of the last great wildernesses.”

Dr. Scullion explained to me that biodiversity is the foundation of economy and society. You cannot have either without a healthy ecosystem. “It produces the goods and services we depend on.” The harm of not taking care of the environment is something Dr. Scullion stresses. “When we degrade and start short-changing our ecosystem, we are immediately harming ourselves or other people’s futures.” He wants people to understand that we actually can “have it all” if we pay the environment the attention it needs. The weight of his next comment caught me by surprise. “They have and inherent right to be here just like we do.”

We discussed his recent trip to New York, to where he brought just over forty McDaniel students to the People’s Climate March. Dr. Scullion describes it as an incredibly powerful movement; only 100,000 people were expected to come and more than 300,000 came. “We wanted to represent,” he states. He mentions how the United Nations is meeting to prepare a new climate treaty. “People are agitated. We want change. We think–we know–the future is threatened if things don’t change. The time is now.”

So was the protest a success? I don’t think he agreed too much with my choice of words, because success can be subjective, but he did say that the protest was a “knitting point.” He must have seen the look on my face, because he elaborated by saying, “for a social movement to be successful, they have to unite around a single idea…climate change was it.” In other words, this one similar idea stretched over many areas on focus and brought people together. Dr. Scullion also emphasized the importance of students partaking in the trip. It was a huge challenge, but also a huge opportunity. “I wanted them to see they are a part of it by being present. If we didn’t go, it would have been forty less people that were there.”

I asked if he is working or has worked on any conservation efforts in his home state of Washington. He said no, but he seemed pretty optimistic about the lovely citizens of the state and what he feels they can do without him. “I focused all my work in the Americas and in the developing of them. I think it’s the place I can make the most difference…I want to empower and support the front lines of the last wild places.”

In regards to Maryland, Dr. Scullion also compares it to his home back on the West Coast. “It’s polarized. There’s a strong urban and rural divide, and I think that’s true in Maryland as well.” I ask his opinion on state conservation issues like the watersheds and the Chesapeake Bay, and he is honest in telling me he hasn’t been here long enough to look into it. However, “fracking is something that’s really interesting,” and an issue that he knows he will look into.

Dr. Scullion is looking to teach Conservation Biology courses every year to widen the knowledge about conservation efforts. He is also looking into taking a field trip to West Virginia to look further into mountain mining in the region and effect it has on both the people and the environment. “It’s so important to me that people know about this. I want students to get involved.”

Next summer, Dr. Scullion is returning to the Peruvian Amazon to produce more maps in relation with his conservation efforts. He is also looking at potentially bringing a student or two. However, he has a lot on his plate with having to spend at least a good month writing and pulling together current projects. Future trips will possibly take place in Central America, “back to my roots, back to Mexico where it all began,” he says. What exactly would he be looking into? The southern region of Mexico into Guatemala and conservation efforts there, he responded. There is also the possibility of a tour of Central America in the far future, a tour with a friend to see “the last wild places.”

Where in Westminster: Baugher’s Restaurant