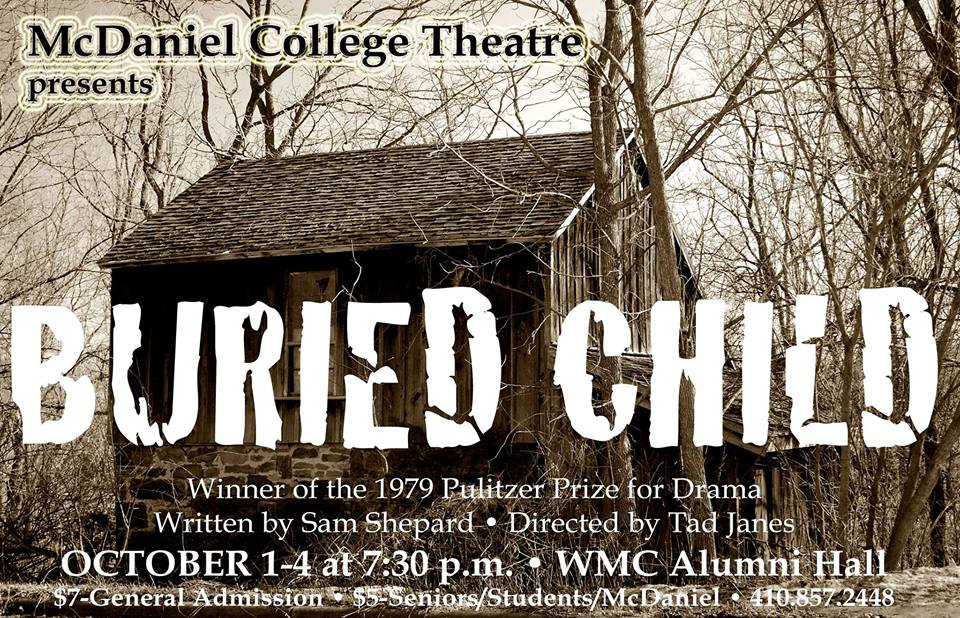 You can choose your friends, but you can’t choose your family. Unless you bury the relatives you dislike in the back yard.

Sam Shepard’s “Buried Child” will be performed in WMC Alumni Hall by a cast of seven McDaniel students from Oct. 1 – 4. The show is set to start at 7:30 p.m., and ticket prices are $7 for adults, and $5 for seniors, students, and the McDaniel College community.

“Buried Child” was written in the late 1970s, winning the Pulitzer Prize for Drama in 1979. The play was also nominated for five Tony awards after making its Broadway debut in 1996. Characterized by the decline in rural economics, this play shows the complex and distorted reality of families under stress. Shepard’s play focuses on a family which can only be described as dysfunctional (granted dysfunctional is a gross understatement, much like saying “Les Miserables” has a little bit of singing in it). 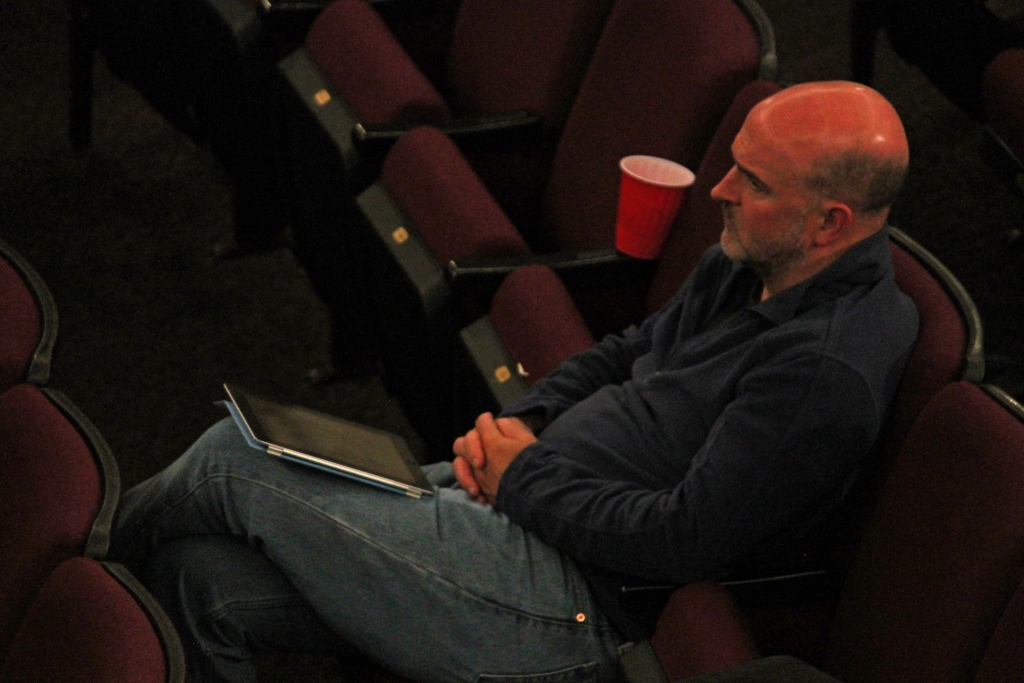 Tad Janes, the Artistic Director of the Maryland Ensemble Theater in Frederick, is directing “Buried Child,” and says that working with McDaniel students has been a great experience, especially considering how difficult the show is.

He goes on to say that the show reveals universal truths about family and relationships; augmented by Shepard’s style: a “surreal stream of consciousness,” which serves for both the director and his cast as a challenge and an opportunity.

Furthermore, the show’s incorporation of surrealism with an unexpected touch of dark humor, Janes says, recalls the trend of experimental theater in the 1960s, where Shepard began his play-writing career.

Janes explained that Shepard’s style was considerably affected by his environment, especially his relocation to London, which left him feeling isolated and prompted his shift in theme to family life and dysfunction.

“It’s tough to do,” Janes says, adding that he is excited for the performance.

Brandon Richards, a first year student with a love of theater, plays the character Bradley. He says that it’s “incredible” and “an honor” to have the opportunity to be a part of such a small cast as a first year, and says that the  plot “makes you thankful for your family.”

Richards also said that the show has been a learning experience both in working with new people and in finding ways to get deeply into character.

His character, Bradley, the family’s aggressive brother, has lost his leg in a chainsaw accident. He continues to struggle with adjusting to living with his family, and finding his personal identity. Says Richards, “The show will blow your mind”. He adds that the show is remarkable for its macabre humor with a sick twist.

Craig Corlis, a senior, says that the show is dark, yet surprisingly relatable. Vice President of Alpha Psi Omega, Corlis has performed in several productions at McDaniel, most recently, “Fat Pig” by Neil Labute. Says Corlis, “I’ve always had fun here at McDaniel on the stage.”

In “Buried Child” he is playing Vince, a character who initially seems to be “the normal one.” After six years away from his family pursuing music in New York, Vince returns home to find his family has “gone to hell in a hand-basket,” forcing him to retreat to their level of sanity, or lack thereof.

“It’s weird going through that transition—trying to figure out just what exactly made him go around the bend,” Corlis says. “Because in the beginning, the audience kind of relates to him.”

“They didn’t deal with the problem in any healthy sort of way,” Corlis says, “They kind of… bury it. The general moral is to not just bury your problems and pretend they don’t exist. Try to deal with them in a healthy way.”

Corlis went on to say that the show has a lot of funny and surprisingly sympathetic moments. “It’s a show of nutty characters with relatable aspects,” he says.

The most eccentric of these characters, it seems, may be found in the family patriarch Dodge, played by sophomore Wesley Brown. 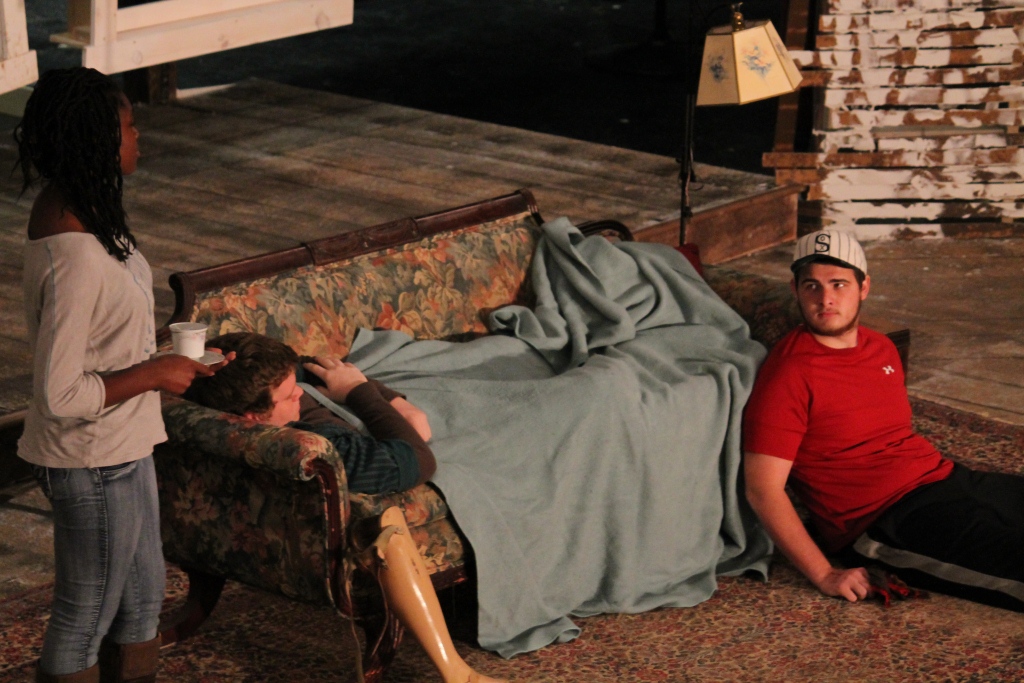 Says Brown, “It’s interesting playing a character 51 years older than myself. It took a lot of research.” Brown conducted much of his research by spending time with a 75-year-old acquaintance; the rest, like trying to channel the cynicism and apathy of the 70-year-old alcoholic patriarch of a family that, to say the least is a wreck, took more work.

Brown also says that it’s an added challenge playing a character that is so incredibly cynical.

Though the show at its core is dark, Brown says, his character’s cynicism can make it kind of humorous. “It’s a huge mess,” he says, but adds that his character, Dodge, who rules the roost, tries to make light of the situation as much as possible. Dodge would likely wonder, “If blood is thicker than water, what’s thicker than whiskey?”

When all is said and done, home is where the heart is, even if it were to be found buried in the back yard.

Editors’ Note: Because the Saturday Oct. 4 performance of “Buried Child” was canceled due to a power outage, McDaniel College Theatre will present a makeup performance on Sunday Oct. 5, free of charge.

New to the McDaniel Stage: “The Rivals”