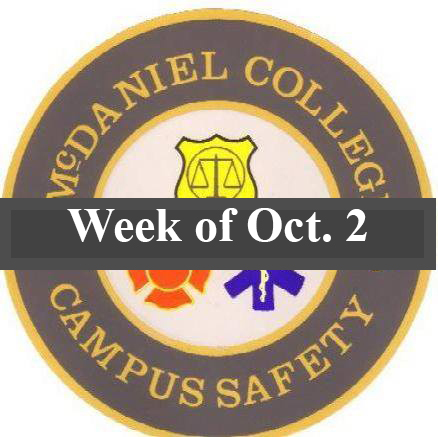 So McDaniel, I’m questioning now whether it’s within my code of ethics to ask you guys to commit some more varied offenses. Because although you certainly were quite rowdy this past week, you all seemed to be doing the exact same thing. So please, if you’re going to make bad decisions, at least make them interesting enough for me to make jokes about; with that out of the way, let’s get started.

As I stated, you all are incredibly unimaginative in your offenses, and seem content to spend your week assaulting, vandalizing and generally being a jerk to a variety of inanimate objects.

For starters, we had a bright, if grossly inebriated, student in North Village this week who decided that tampering with vehicles was a wonderful way to spend the night. Of course at some point, tampering must have come to require control of motor skills too fine, considering said student then simply resorted to throwing objects at said vehicles. The result of this raucous night of jovial automobile vandalism? A count of possession under 21, possession of hard liquor, malicious destruction of a vehicle, malicious destruction: throwing of an object at a vehicle, and drunk and disorderly conduct. That’s a rap sheet to make any mother proud.

Of course, despite such a lengthy rap sheet, the student above at least refrained from one crime: theft. Luckily, one of his fellow students valiantly engaged in such a perilous task, and ran through McDaniel Hall vandalizing and stealing. I’m operating under the assumption here the stolen property and the damaged property were in fact not the same things, but you know what they say about assumptions. That they fail to take into account the effects of alcohol on the standard college student or any possible personal aesthetic value found in broken objects. In the end, maybe our larcenist was just a misunderstood artist/auteur — and maybe I’m actually a twelve-foot blue crab hiding on the LL level of the library, typing this article with my feelers.

Speaking of the library, someone also decided this week that, in a fashion that would make Don Quixote proud, it was about time someone waged war on this inanimate beast that has kept them in its belly for hours studying. And so they proceeded to vandalize the library, and by that I don’t mean the books or the shelves. I mean the structure of the Hoover Library. What they hoped to accomplish still baffles me.

Some students were more tangible, though no more logical, in their vandalism, and instead decided to attack an event sign in Rouzer. Was the sign too scandalous for student eyes? Was it too offensive to their tastes? We shall never know. But my guess is no to both; rather, they were just living out their repressed fantasies in a world where Fight Club isn’t real.

Of course, students couldn’t just attack libraries, signs and cars. They of course had to attack each other as well, given the assault with hands/feet also reported this weekend (making the Fight Club reference quite relevant). What did I say last week guys, hands and feet to yourselves, otherwise you get a time out – except this time the time out zone is less corner of the room and more a booking cell. And trust me, booking cells aren’t exactly nice places, though I could say that of most college dorm rooms.

I’ll end on a positive note though, with the stuff you guys managed to avoid; North Village had only one cooking fire alarm, though they more than made up for it in other areas, and there were no more actual fires. Additionally, Rouzer and Whiteford seem to have listened since neither had any alcohol incidents.

With that being said, stop attacking signs, cars and other things that cannot and have no intention of fighting back. Sure, you’re my job security, but it’s not that easy to write snarky, sarcastic replies to reports of people attacking libraries, and I’m nothing if not incorrigibly lazy. See you guys next week.

Sex on the Hill: Places Where People Have Done It

Partying is a Crime