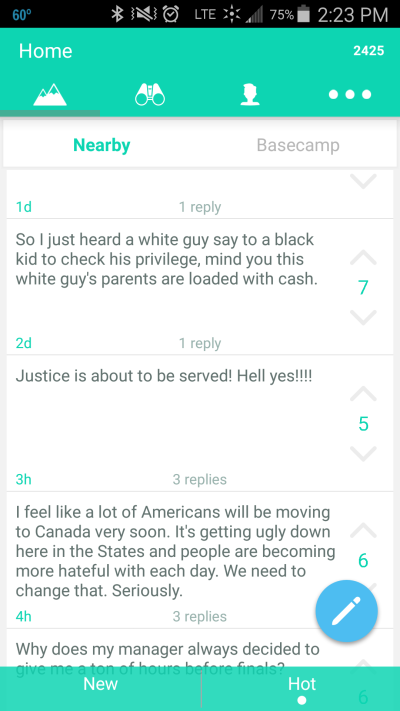 Reactions to Baltimore on Yik Yak.

A few months back, in the wake of the Ferguson riots and the murder of two police officers in Brooklyn, I wrote up a brief piece on the dangers of absolutes in regards to the debate on police violence against African-Americans. I never ended up sending it in, but now, in the wake of the recent riots in Baltimore, I felt it necessary to reprise it to fit the current scenario.

Any student who happened to look at Yik Yak on the day and night of the riots was likely to see a barrage of comments either defending or lambasting the rioters in the street; many either featured heavy anti-police rhetoric or semi-racist rhetoric condemning the protestors and rioters as “thugs.” While these comments may seem the product of anonymity, they were echoed across Twitter and the major news networks throughout the night as well.

The sentiments these comments entail, however, exhibit a larger issue inherent in the current debate: the tendency to attribute the issues to a few individuals or groups rather than examining the system as a whole.

To place the blame solely on the police or on the rioters is a fallacy at best; both groups operate within a system that often pushes them to act in a manner that is often less than suitable or appropriate. In a recent interview with the Marshall project, David Simon, creator of The Wire, argued that the actions of the police in modern Baltimore can be attributed to a combination of the War on Drugs and plans instituted by former Mayor Martin O’Malley which emphasized quantity over quality when it came to arrests and police work on a whole. Does racism play a factor? In many cases it does, but the power of said factor would be limited if policing practices were not as flawed as they are to begin with.

As for the rioters, while their actions were destructive and in many cases illegal, it must be examined why they engaged in the actions they did. Many of these young individuals have lived their whole lives in abject poverty that rivals areas of the third-world, and in areas prone to extreme violence. To these teenagers, the police are nothing more than fascists who come into their neighborhoods and arrest them for arbitrary offenses; and so when, in their neighborhood, one of their own is killed in a manner that is questionable at best, that anger and unrest boils over into destruction and violence. And yet when it comes down to it, they are nothing more than pissed-off teenagers, radicalized by their surroundings and triggered by one too many dead bodies.

So while the media and the members of the McDaniel community argue over whether or not it’s the fault of the pigs or the thugs, perhaps we can step back a bit and examine the broken system that led to this event. When the police are made into nothing more than wrecking balls for the failed War on Drugs, and the disenfranchised are relegated to a live of abject poverty and incarceration, the stage is set for riots, anger and violence on both sides. What exists here is more than a war on racism, or a war on gangs or inner-city violence; we must wage a war on the very systems that define the modern American city, and in some way destroy them, before they destroy countless more lives.

The Power of Giving Back