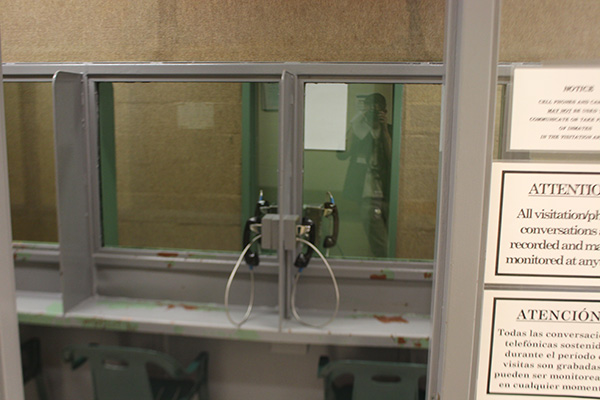 This piece is the second in a series of dispatches from the Carroll County Detention Center. Read the first piece here.

We emerge from the basement back on the main floor of the prison; the hallways are fairly busy, with a number of guards sitting or walking around, and the occasional prisoner helping to paint. One or two doors are open, but on a whole they remain shut.

Bob first shows me the low/minimum security area, or at least to the plain green door of it. He explains that this area houses detainees who are not believed to be a threat to their fellow inmates and “can take that next level of trust.” This mostly includes those in for crimes such as DWIs, DUIs and failure to pay child support. The area, from what I can see and from the description given to me, is open with bunks lining the walls.

I’m then shown Unit 60, which is high security and houses inmates awaiting trial. Due to their alleged, often serious, crimes, these prisoners are accorded higher levels of security.

We then enter the guard area between Units 50 and 60. Unit 50, I’m told, houses medium-risk inmates, often those who are gang-affiliated. Through the glass, I can see inmates walking around; one inmate comes close enough that I can see the tattoos covering his arms and chest. The guard here explains that when volunteers come in with Chaplain Bob, the one rule is that they leave nothing in the cellblocks, stating that a pen left there one day “is in someone’s neck the next.”

From here we move on to the women’s units: Unit 70 (intake), Unit 90 and “The Hallway.” Bob notes that while the detention center population at the present is largely male, there has been a rapid increase in the number of female inmates nationwide, making them the fastest growing group in American detention centers.

After this, I’m shown the separated units, starting with J-POD, an area reserved for sexual offenders. Unlike the other doors, this one has a piece of paper over the viewing window, and is a distance away from the main hallway. Inmates here are kept separate from the general population, given that the nature of their crimes could make them targets for other inmates. The other isolated unit is K-POD, which is the maximum-security area, in which inmates are kept in their cells for 23 hours, with just one hour for a walk or shower. These inmates are either on suicide watch or cannot be placed in the general population for other safety reasons.

Lastly, we reach the special program units: Unit 20, Unit 30 and Work Release. Unit 20 houses the drug treatment program, which involves a 90-day plan aiming to help inmates kick their addictions. In Unit 30, inmates with mental health issues are held for treatment. Both areas are more open, with tables in the middle, cells on each side, and a variety of TVs and computers. Lastly, there is the Work Release Unit, which is lower security, and from which inmates either go out to work each day and/or serve as trustees in the center.

On the way back to Bob’s office, we finally see the central booking, which he explains handles around 1,800 people per year from all over the county. It contains three holding cells, and operates 24/7.

Upon departure, I realize in many ways that the Detention Center serves as a contrast to the College so few blocks away; inside its walls it too holds teenagers and young adults no older than the student body of McDaniel. And yet they live in captivity, victims of everything from their vices to the inherent inequality and unfairness of the society in which we live.

Is College Worth Your While?