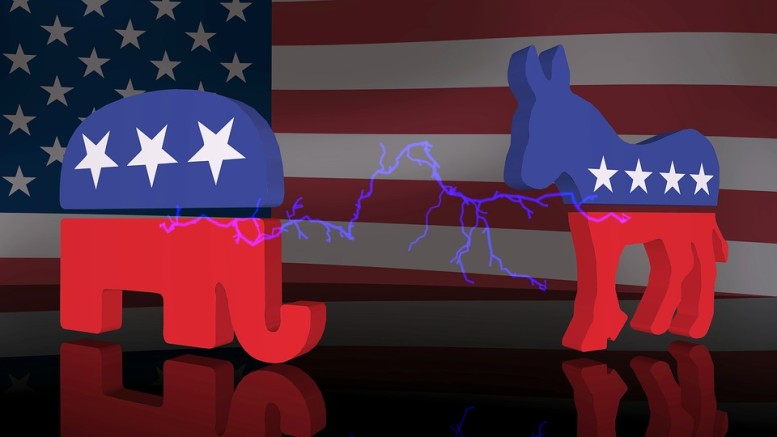 Gridlock. Frustration. Irritable politicians. American politics has an issue that has caused the government to shut down and enraged many Americans. This issue is hyper-partisanship.

Hyper-partisanship is the reason why American politics is in such a state of flux. It is a shame that our Congress simply chooses to agree to disagree on so many things rather than finding a solution. That only hurts the people.

In the last Washington Post-ABC News poll, which was released Tuesday, reports that 68 percent of probable voters believe that the country is “on the wrong track”. In the 2012 election electoral map, there was a deep rural Republican red surrounding heavily populated Democratic blue cities.

A 2012 CNN article titled, “Hyper-Partisanship Dragging Down Nation”, states that “a quarter century ago 62% of Republicans and 79% of Democrats believed that government should “take care of people that could not take care of themselves.” The article goes on to say, “Today, 40% of Republicans believe in that aspect of the social contract, while 75% of Democrats still do. What happened to compassionate conservatism?”

Taking a look at these things, Americans have gotten weary about helping their poor. Republicans have made a big shift in their stance.

These radical changes have had a negative effect on Americans. With complete changes to Americans’ thought processes, brought on by different news media reaffirming what Americans want to hear, it has hurt our homogenized and “greater good” collective thought processes.

As two books – Bill Bishop’s “The Big Sort: Why the Clustering of Like-Minded America is Tearing Us Apart” and Charles Murray’s “Coming Apart” – detail, America has reaffirmed itself of self-validation as we wrap ourselves with people who are similar to us.

To build a better country, we must take into account what other countries have done to become successful of late. We have to look at the Constitution and realize that, it is now 2014. We need to ask ourselves, “What can we do to make those regulations and laws apply to modern America?”

In the end, we have to look at ourselves. As Americans, we have a tendency to point fingers at each other, but if we want this country to be successful, we must band together.

This doesn’t involve attacking other countries, or spending billions of dollars outside of our own country, but by using our money and resources to build a better America. Our education systems need a jumpstart, the homeless need to be taken care of and our veterans need jobs when they return.

In a MEA (Michigan Education Association) article, it states that “House Bill 4369, which passed by a 57-53 margin, allows the EAA (Education Achievement Authority) to take over up to 50 public schools across the state that are deemed to be in the state’s bottom 5 percent.”

This is even without an educational audit to find out the specific problems facing the schools that are determined to be in the bottom 5%. This doesn’t allow for teachers to keep their collective bargaining rights. This was due to hyper partisanship.

Is it fair to put children’s educational rights on the line? I don’t think so. One thing we could do is band together and become more willing to listen to the other side across the aisle. By working together, Democrats, Republicans and other parties could fix education and some of the many problems that Americans have

These are just some of the things that we can do together by ending this tyrannical wave of hyper partisanship. What will you do?