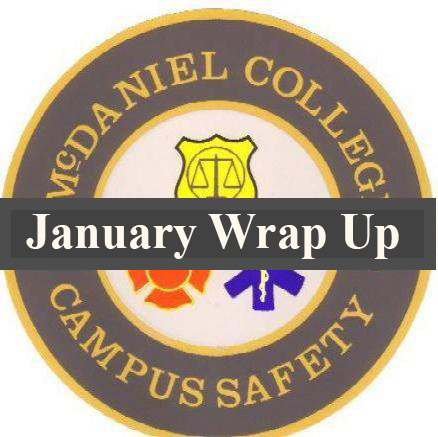 It’s a new semester guys, and I must say the students of McDaniel have made my life easy since the beginning of 2015. So without further ado, here is a round up of all the stupidity the campus has been up to in the new year.

Starting it off with a bang, and thankfully not a crash, we have the genius that got busted on Historic Drive for a DWI. Given that everywhere to drink around campus is basically within walking distance, I have to question the logic of hopping in a car; however, said person was also charged with trespassing, so I doubt they had any logic regarding their actions to begin with.

In other less felonious news, there was a remarkable amount of people deciding to destroy things last month, with malicious destruction of property on Pennsylvania Avenue, three separate incidents in Lewis (the jury is still out if any of these were the results of sociology experiments gone wrong), one in the labs in Eaton, one attack on a door in Rouzer and finally, most shockingly, one incident in Little Baker of all places. I mean, I know and respect the whole motto “rather laugh with the sinners than cry with the saints” and all that, but that doesn’t mean you need to actively tempt whatever higher being may or may not be watching over us. So maybe hedge your bets and take a little foray to confession next Sunday, guys.

There was also a legitimate cooking fire in North Village last month, proving that not every fire alarm that goes off at McDaniel is unnecessary. That being said, there were also three false alarms in North Village and one on Pennsylvania Avenue, showing yet again that college students are not just bad cooks, but outright dangerous ones. Maybe stick to ramen and mac and cheese next time.

Of course if there was a fire in Blanche, they might have been up the creek with no paddle after someone decided to tamper with their fire extinguisher. I’d like to imagine it was some wild attempt to get the last ingredient for the next-level, avant-garde cocktail someone was trying to create, but in all honesty it was probably some drunk guy who tried to poke a hole in the extinguisher and shotgun it. Which sounds awesome in theory, but in practice is basically just an easy way to rack up a pretty hefty dental bill as scientists try to find a cure for freezer-burned gums.

It seems a few residents of Blanche were just so done with the system that three of them ended up getting slapped with counts of Disorderly Conduct both for failing to obey orders, and failing to provide ID. Personally, I say keep fighting the man guys, they’ll never know how to handle you being a loud, raucous buffoon who commits the terribly insurrectionary act of annoying the crap out of everyone in the general vicinity and refusing to leave when asked.

Someone also apparently engaged in malicious mischief in Winslow, which, although I’m not totally sure what differs malicious mischief from say, malicious destruction of property, the fact you did it in the building that houses campus security proves to me the real crime here is outright stupidity.

Lastly, two people were caught trespassing in Decker and Ward, proving that sometimes when people are bored at one in the morning, they still go and make their lives more boring by trespassing in empty school buildings instead of, I don’t know, being social or something.

What We Can Learn From Mizzou and Yale

Sounds of Change in the Honors Program

We DID Start the Fire: SAE to host Phoenix Fest