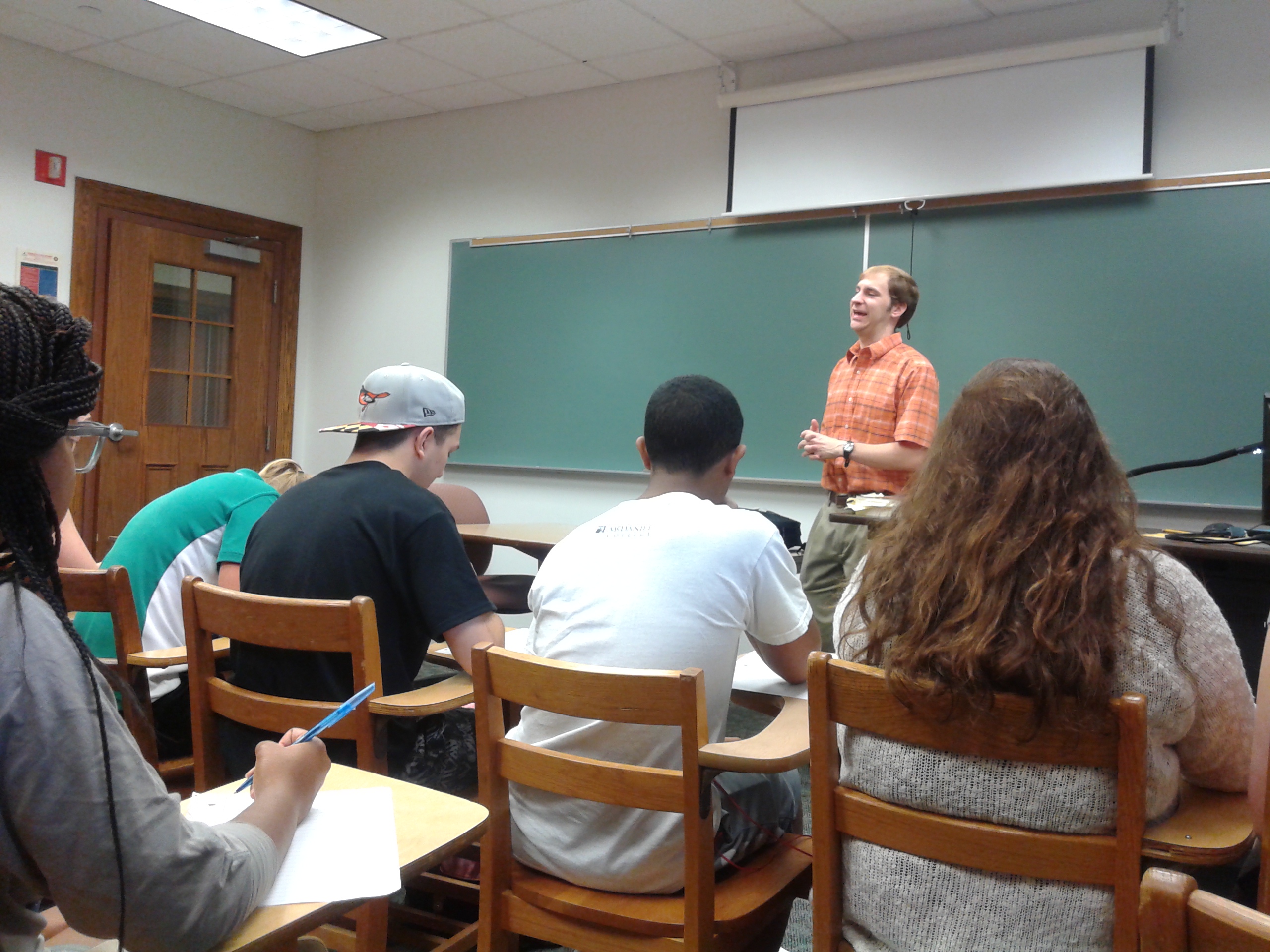 Zajac teaching his FYS, Shakespeare in the Movies Photo by Danielle Fatzinger

You may have seen him in Glar or walking across campus. He’s clearly not a student, but also seems too young to be a professor. He’s as new to the campus as the incoming students and as bright-eyed and bushy-tailed as our lovely campus squirrels.

His name is Paul Zajac, and he’s the newest addition to the English Department. He will be teaching Shakespeare courses at both the undergraduate and graduate levels.

Fresh from his Ph.D. program, where he had plenty of experience teaching and studying literature, it was surprising that he admitted that literature wasn’t always a part of his life.

“A love of reading and a love of literature is something that I came to in high school,” said Zajac. “A lot of people just kind of assume that if you’re an academic, you loved reading growing up. That really wasn’t me.”

In fact, while growing up, the book he read the most was a novelization of Donkey Kong Country.

“To this day, I bet that’s still probably the book I read the most times in my life,” Zajac said.

So how did he end up here?

“Shakespeare was a really big part of it,” he said. “Because I already loved theater going into high school, I quickly picked up Shakespeare, and that was the first time that I ever thought deeply about a text outside of the context of writing a paper for school.”

He went to Loyola University for his undergraduate education, where he double majored in English and theater.

“My second semester of college, I read [Edmund] Spenser’s Faerie Queene for the first time,” Zajac said. “Everyone else hates this book, including kind of the teacher, but I was completely enamored with this thing. I took it as a sign that maybe there’s something for me here.”

From there, he went to Penn State, where he received his dissertation in English Renaissance Literature. He graduated just a few weeks before teaching his first class at McDaniel. He was drawn to the job because he’s a Maryland native and wanted to be part of a small liberal arts community. He’s teaching Intro to College Writing in addition to his Shakespeare courses.

When asked to give advice to students, Zajac said, “There are so many people here at McDaniel who want to help and that are available to help. Students should not hesitate to take advantage of things. It’s okay to ask for help. This is clearly a very student-centered, caring campus.”

He’s excited to get to know students, be both a teacher and advisor, and enjoy Chicken Tender Thursdays.

After some thinking, he added “McDaniel Tailgate” to the list of things he’s excited for.

“I need to see what that’s all about,” he said.

In his free time, he likes to write, especially playwriting and poetry. He also enjoys going to the theater, watching films, and hiking, although he doesn’t like to spend more than a few hours in nature at a time.

He has no pets, although he might get a small dog, and is a Ravens fan. His favorite movie is Casablanca.

“Every time someone asks favorite movie, it’s all up to taste and opinion, but Casablanca’s the right answer,” he said.

Zajac’s favorite superhero is Spiderman, and he is a huge Nintendo fan: “I grew up on Nintendo, so I have a lot of random Nintendo paraphernalia.”

New Study Abroad Programs to be Offered by IPO