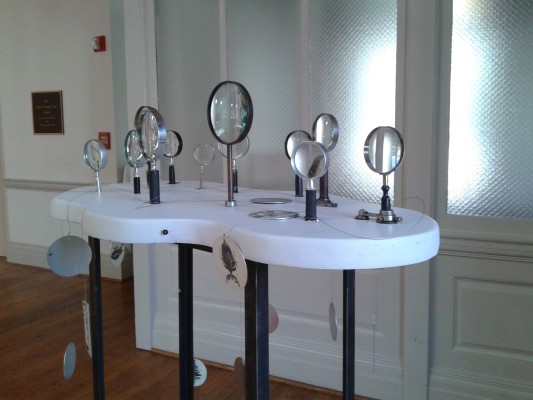 "Leeuwenhoek's Dream," one of the pieces of art exhibited in SKEPSIS.

In McDaniel College’s Rice Gallery sits an exhibition that encourages investigation and an eye towards discovery: “SKEPSIS” by Breon Gilleran.

The collaborative nature of the exhibition places cleared and stained animals (a goldfish, a fetal cat, and an eel) within feet of works on paper and a 3D printed skull. A reconstruction of a rabbit’s skeleton is next to a drawing of a raccoon’s skeletal system, each with the same color coding of the types of bones in the bodies.

Metal sculptures, including a large rectangular piece called “Data,” are juxtaposed with works based upon vertebrate bodies. One piece, “Leeuwenhoek’s Dream,” invites thought of investigation through its use of magnifying glasses, through which you can see other magnifying glasses, other parts of the room, or the images that are attached to the magnifying glasses. The title of the piece comes from Anton van Leeuwenhoek, who improved microscopes and was the first person to observe and describe single-celled organisms. 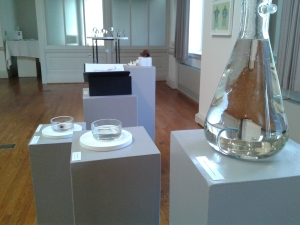 One of the pieces of art exhibited in SKEPSIS.

In addition, the pieces are all drawn together by the idea of science. This is most notably observed in the title of the works, even from those which are not directly related to the sciences: “Data,” “Leeuwenhoek’s Dream,” “How to Save a Man,” and “Protein Fold,” for example. This overwhelming theme of “science” fits Gilleran’s goal, which was to show the rich relationship between science and art.

According to Gilleran, the sciences and the arts are often seen as two separate things, but they can be, and are, used together to create a deeper understanding. This is seen through her work “Dog Skull,” which is the remainder of a skeleton Gilleran put together in her basement when younger. It taught her useful things about being an artist and a nurse: how to observe and trust her fingers. Those skills also came in handy during the time she was a nurse.

The works in the exhibition from the Dr. Staab’s Comparative Anatomy course shows the link between science and art from the other side. According to Dr. Staab, science professors use art in their classes all the time, as shown by the binder of visual study guides for Dr. Staab’s class that are on display between the 3D printed skull and the cleared and stains specimens. 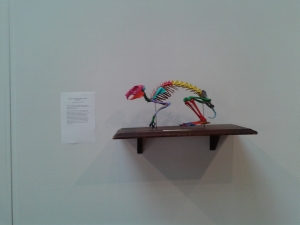 One of the pieces of art exhibited in SKEPSIS.

Although Gilleran claims not to have an agenda with this exhibition, meaning she is not making an argument or a political or social statement, many spectators can argue otherwise. However her agenda is, the main focus of the exhibition is to show the links between science and art, and let viewers make their own conclusions and decide on their own interests.

As she said in her artist’s talk, the possibilities of things to be done by combining science and art is bottomless. Galileo and da Vinci were both artists, after all, and art makes the more complex ideas of sciences easier to understand for those not trained in scientific language and thought.

The exhibition does well in inviting the viewers to think critically and become curious, a habit of both artists and scientists. I strongly recommend the exhibition to anyone with a curiosity instinct, both for its variety of works and the investigative qualities of the exhibit.