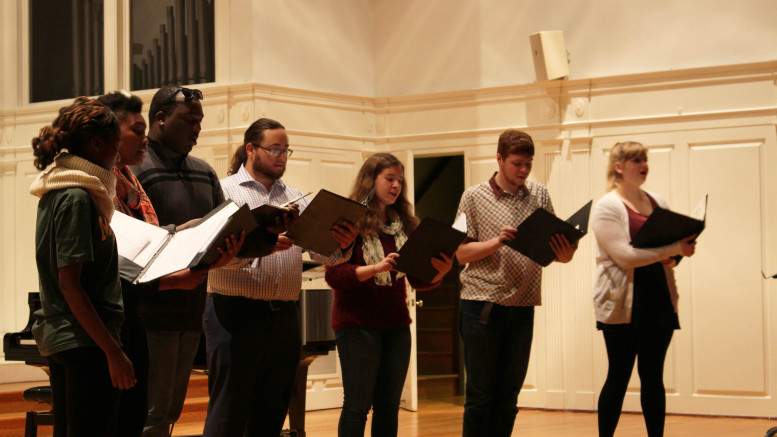 Madrigals performing at the Talent Show, days after the College Choir Concert. Photo by Danielle Fatzinger

On November 22, the 38 member McDaniel College Choir performed their concert “Songs of Joy and Reflection.”

Margaret Boudreaux, the usual Choir Director, is on sabbatical this semester, so the concert was directed by her temporary replacement, Diana V. Sáez. Sáez chose the name of the concert because of the joy of the holidays and the necessity to reflect on many recent events.

“Music is always a good instrument to think, to reflect, to think deeply, to find meaning in things,” says Sáez.

The choir opened with Gloria from “Heiligmesse” by Franz Joseph Haydn; arr. Patrick M. Liebergen. The songs that followed originated in a variety of places, including: Norway, Argentina, Peru, and Colonial Mexico.

“I wanted to expose the students to different styles” says Sáez. “I think when you are doing a concert about the holidays, it’s always a good opportunity to bring music from other cultures.”

The McDaniel College Madrigal Singers, a premier vocal ensemble pulled from the choir, performed five songs during the concert.

During the penultimate song, “Still, Still, Still,” the choir’s alumni in the audience were invited to sing on stage with the current choir.

As per tradition, the concert ended with “Silent Night,” only this time, Sáez introduced a small twist in the week leading up to the concert.

“It’s been a tradition to sing ‘Silent Night’ at the end, and this year we’re going to sing one verse in French,” says Sáez. “We’re going to sing it in memory of the victims of terrorism in Beirut and Paris. We added this little detail to make it more meaningful.”

The choir then invited the audience to join as they sang the first verse of the song in English.

Sarah Lighter, McDaniel junior, said, “The choir concert was beautiful. Everyone’s hard work paid off. I like how they brought some Spanish traditions into the concert, and that they had a tribute to the Paris attacks. That was heartwarming.”

To read more about the remaining musical performances this semester, check out McLive.

The Truth Behind the Aryan Race as Presented in “The Aryans”