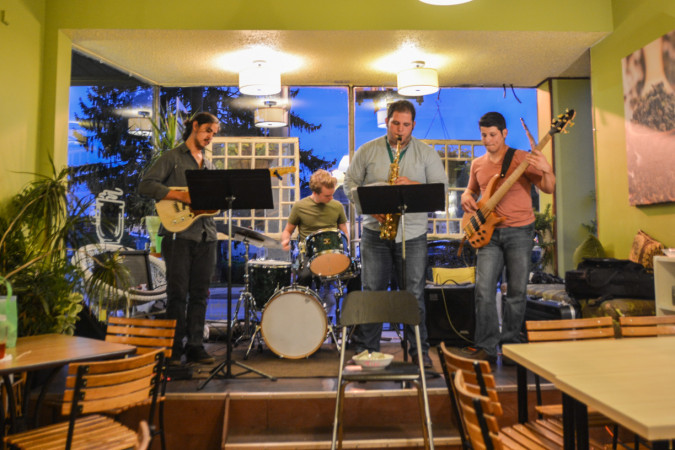 As dusk set in on Sept. 25, the first night of Fall Fest, roads closed, cars and people were abundant, and activities opened up around every corner. A sense of organized, yet enjoyable chaos overtook Main Street and set the atmosphere for a McDaniel graduate’s jazz performance alongside other local musicians. 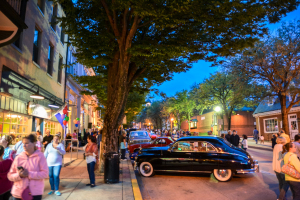 The first night of Fall Fest offered an exciting backdrop for the performance. Photo by Stefan Specian.

For this gig, Eron played with some musicians he knows well, but, beyond this, he currently has two jazz groups: the Charles Eron Trio, which is more about improvisation and the Charles Eron Standards Group, which focuses more on tunes that everyone will know. Among a variety of musicians, Eron plays with McDaniel professor John Seligman. 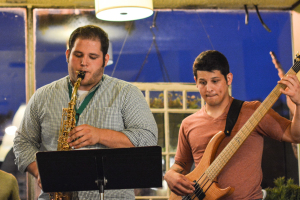 As a McDaniel student, Eron was heavily involved in music. He majored in music theory and composition and notes that “[he] was one of two in [his] graduating class.” Some notable moments include his own classical piano trio composition, which he premiered at his senior recital, and receiving the Class of 1938 Award for Excellence in Music.

Eron has continued his close relationship with music even after graduating. While he often dwells in the world of progressive metal, he still sticks to performing jazz. On this, Eron says that he enjoys the “language” that improvisation allows musicians to speak, saying, “when you’re improvising with a group of [musicians] and you’ve got a good vibe going, you’re speaking to one another in this language.” 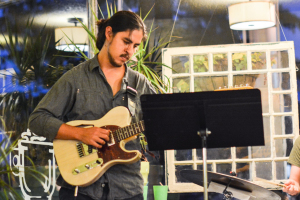 Knowing this made the performance even more captivating. The communication between improvising musicians was visible and something special was clearly occurring between them. Each musician had segments in which he momentarily took the lead and added his own unique “statement” to the song.

On performing, Eron notes, “it’s all about your own style,” which each musician elegantly displayed. In explanation, Eron says, “the way I [have my own sound] is with the particular petals that I use and the type of picks that I use, but it’s also the notes you play.”

This was a perfect fit with warm tea, pleasant meals, and a café feel. The ease of enjoying this jazz act was surprising. Due to the small footprint of The Cup, their music eclipsed nearly all ambiences in the room. Despite many customers arriving in groups, many seldom felt compelled to speak and rather tuned into the “conversation” on stage. 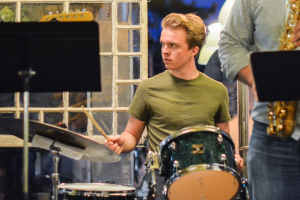 Eron can be found performing alongside others every first and third Wednesday at Conah’s Bar and Grille and every third Saturday at Artisan Wine Company.

In the future, Eron hopes to get more involved with the Baltimore jazz scene as well as perform with D.C. players. Additionally, he is in the process of trying to get a progressive metal demo released in December. As a web developer by day, Eron notes that it is not payment drawing him to music, which is meager to say the least. Rather, he asserts, “it’s not about the money, it’s about having the right guys to play with.”

Enjoying Springtime on the Hill: A Photo Essay