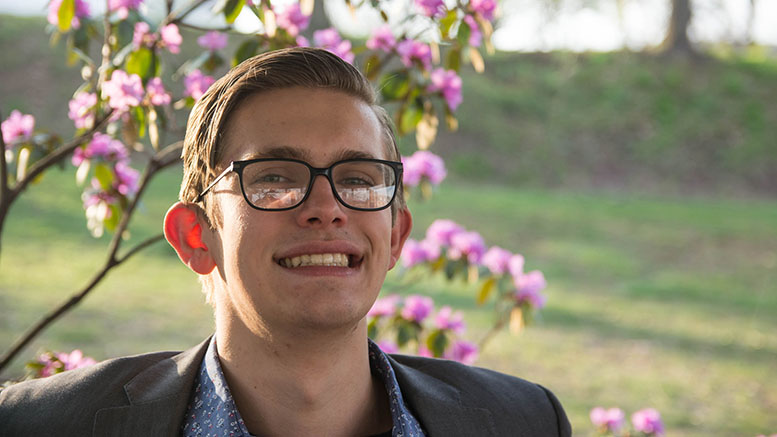 With the days left until graduation dwindling, Managing and Commentary Editor Stefan Specian is completing some of his final coursework, as well as tasks for the Free Press.

Specian has been involved in the Free Press since his freshman year. He became an editor his sophomore year and has been in charge of several different sections.

An involved student, Specian is also a brother of Sigma Alpha Epsilon Fraternity, for which he was the treasurer for a year, and has served on the editorial board of Contrast, McDaniel’s literary magazine, three of his four years here.

While admitting that there were aspects he enjoyed and didn’t enjoy about the college, Specian acknowledges, “I’ve made a lot of great friends, and connected with a lot of great people, and at the end of the day that’s what I’ll remember, rather than the more negative aspects. I’m leaving here with a solid education, solid connections, and memories I can look back fondly on.”

Stefan was also hired to work in the Writing Center his freshman year and has worked there since. Beyond McDaniel’s campus, he has held several internships. He was worked for the Literacy Council of Carroll County, the Law Firm of Stoner, Preston, and Boswell, as well as his recent work in the office of Delegate Pamela Biedle during the 2018 Maryland Legislative Session.

“These internships have all been highly rewarding, and I’m thankful I’ve had an opportunity to experience them,” said Specian about these experiences.

Specian would like to thank two of his biggest mentors during his time in college from the political science department. Dr. Christianna Leahy has been his advisor, and he credits her effective mentorship, saying “She definitely introduced me to a lot of new ideas that I would never have considered had I not had class with and discussed them with her, and I’ll definitely take what I learned from her into the post-graduate world.”

He also found a strong mentor in Dr. Herbert Smith. Though he only began taking classes with Dr. Smith in the later part of his college career, Specian remarks that “His encouragement for me to continue writing has definitely helped me improve as a writer, and I appreciate all the support he has given me over this past year and a half.”

During his fall semester junior year, Stefan studied at McDaniel’s Budapest campus and remembers it as one of his fondest experiences. Many of his best memories, however, come from working for the Free Press. “It really did shape my plans for the future in ways I never could have expected coming into McDaniel, and I’ll forever be glad I was a part of it,” he remarked.

Specian was challenged by campus culture at times, feeling that it was mercenary and perhaps combative in some respects. However, he feels that, “I’m glad I experienced this culture, and I’m glad I learned, through personal experience and discussion with others, how we can make something better from it.”

After graduation, Specian will live in Baltimore and enjoy a break from the workload of academia before possibly continuing on to law school. He specifically looks forward to “…the small things in life for a little while – going to talks and concerts, cooking and reading leisurely.”

To those not yet graduating, Specian offers these words:

You have the power to make your college experience great, and, more importantly, to make the college experiences of those around you great. Don’t get bogged down in the constant rush to be the best of the best, the leader of everything and the winner of all the awards. Because at the end of the day, it’s your undergraduate years in college – it probably won’t define your life, and it hopefully won’t even be the best years of your life. But if you leave here knowing you made great friends and colleagues, and that you genuinely cared about them and supported them, and made a bond that’s going to last a lifetime, then you’ll leave here knowing you’ve succeeded, and you’ll leave here without regrets.