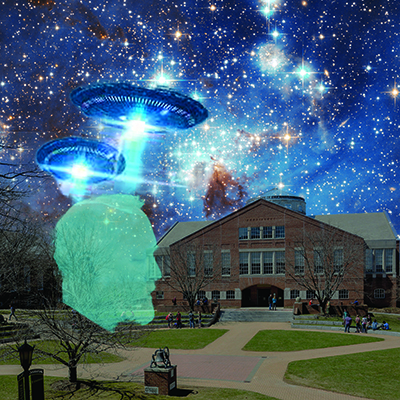 After multiple complaints by students, Campus Safety has finally agreed to investigate the claims that I.T. Department’s Peter Lynn. is an extraterrestrial.

It all started with a claim from Laurissa Trump, political science major, who went to Campus Safety demanding for them to remove him from school grounds because she believed Lynn was “an alien,” to which Campus Safety officers responded “as far as we know, he was born in the US and thus we cannot do anything.”

“Last night, while I was pulling an all-nighter, I saw Peter walk to the third floor of Hoover. Then, strange lights flashed through the windows of the second floor,” says Luke S. Walker. “He came down minutes after and seemed to be holding some sort of metallic machine. It was strange.”

Many other students have also witnessed strange behavior on Lynn. Some students claimed they have heard him speak a language that is not human. “What I heard, is not human. I know because I study languages!” states Caroline Carol, English major. Other students have commented on how Lynn stays on campus during the late hours of night, and how, when talking to him, he seems to ignore most norms of social behavior.

Y. Oda brought his computer to the I.T department, believing it was dead. Lynn, with the touch of his finger, brought it back to life. “It was a miracle, but it was also weird. How did he do that?” Oda exclaims.

His fellow librarians have also reported strange behavior from Lynn. One of them, who wants to remain anonymous for fear of alien abduction, mentions how Lynn will stare into the distance for minutes, then, in a sudden, would start speaking in his Bluetooth while taking notes. He believes these episodes are Lynn communicating to the Mothership.

One student, Fox Mulder., has come forward with some shocking information in the matter. He claims he photographed Lynn ascending to a spaceship during the night of the red moon last semester.

“I was walking with my camera at night, taking some pics of the campus, when I saw Lynn stand outside of Hoover. Then, an UFO appeared and beamed him up. It happened so quickly I could barely snap this pic” states Mulder.

Campus Safety has decided not to speak to the Free Press about these matters as the investigation is still in place, but they said that as soon as they know the truth, they will make it available to the public.

Aside from this claim, other students have come forward with their own theories, claiming he is an elf, a leprechaun, a dwarf, and some even believe he is the last unicorn in existence. The Psychology Department also has a theory and believes he is simply a figment of our collective imagination. The truth is yet to be known.

Writer of the Week: Ethel Payne