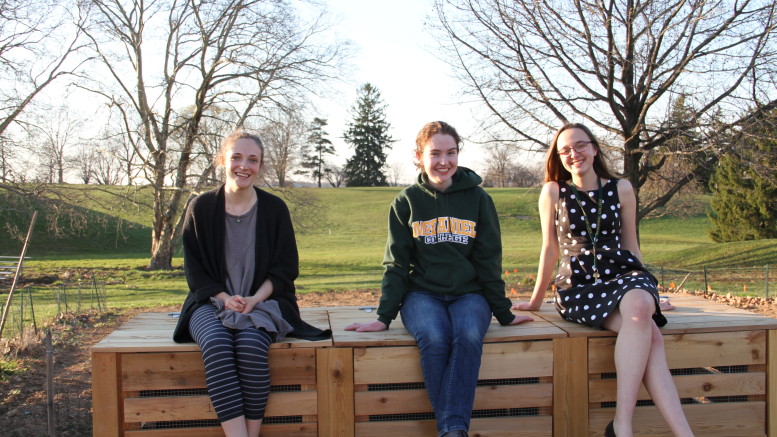 During the end of the Fall 2015 semester, a group of students received a grant from the Griswold-Zepp Award to create a composting initiative on campus.

The group first met in October of 2015, after being matched up by the Center for Experience and Opportunity (CEO). Junior Samantha Yates had written a grant proposal for a composting initiative for her Writing for Non-Profits class in Spring of 2015. Freshmen SG and Theadora Westlake-Stearn had expressed interest in establishing a place to compost on campus to the CEO office.

Westlake-Stearn explains, “[S] and I come from areas where we have municipal composting systems, so every week we would put out a bin and they take away all our compost and make organic compost on a citywide level. So when we got here the both of us were wondering, ‘Well, where do we put our vegetable and fruit peelings?’”

Once the students started meeting to collaborate on the project, Yates explains that it happened very quickly. Gn did research into how they could set up composting on campus, while Westlake-Stearn and Yates communicated with the administration and some members of faculty. They had to follow certain guidelines set, such as having it close to prevent wildlife from entering. Additionally, all had to find volunteers from different organizations to ensure that they could carry out the project.

“The process was lots of logistical planning, “ says Yates, “including finding a compost structure that we could build, plus getting approval of that composting structure, applying for a grant, receiving a grant, and making a budget.”

Westlake-Stearn said that she was surprised at the enthusiastic responses that their proposal received. “Although we had to make sure that it was okay with a lot of different people, we mainly got really positive responses back from people on campus, which was really exciting, so people were interested in making the project happen.”

They built the compost bins on their own from scratch. This took two full days, during which volunteers from PSU, Alpha Phi Omega, and Phi Alpha Mu helped them construct the bins.