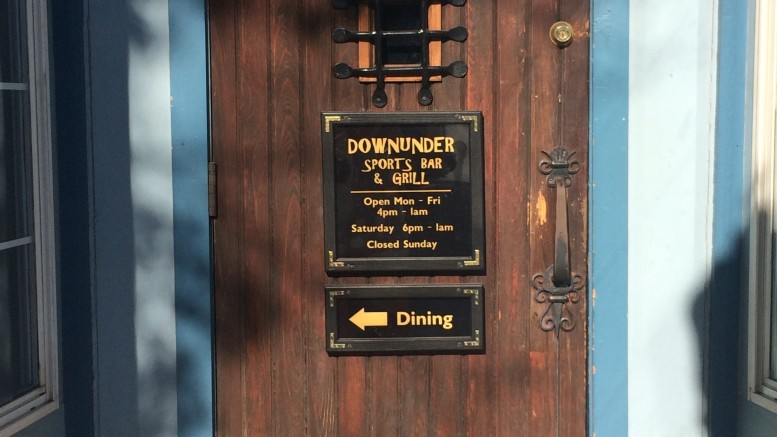 The Downunder Sports Bar and Grille. Photo by Mackenzie Farley.

Anybody who’s anybody at McDaniel College knows about Bar Thursday at Downunder, located at 4 W Main St, Westminster, MD 21157.

It’s the one night of the week when all students 21 and over have the chance to come together for a night filled with music, friends, and fun. One student who wished to remain anonymous stated, “Bar Thursday is lit!”

Will, a bartender and familiar face at Downunder, was more than willing to give his perspective on Thursday night.  When asked his thoughts about bar Thursday, Will didn’t hesitate to respond: “Everybody comes out and has a good time, including all of us working here.”  He also commented on how amazing it is that they continually get between 200 to 300 people to come out together on one given night.  Will says that it’s a really special thing and shows a lot about the McDaniel community.  Will also notices when alumni of McDaniel come back to reconnect with their friends.  He says it’s cool for him to serve his old customers, as well as to hear what they are up to now. It’s also great to hear them bringing back favorite memories of Downunder with all of the student body.

When asked if there was anything that he didn’t like about Thursday nights, the only complaint Will had was about credit cards.  Will says, “In the amount of time it takes to make a transaction with a credit card he could make five drinks and close them out with cash.”  He followed this up by saying that, overall, he has no complaints about the students.  He loves getting to know everybody and serving us the Green Terror Bomb—a sweet-tasting, green-colored mix of Red Bull, Curacao, and Vodka—created especially for McDaniel.

Dave, a bouncer at Downunder, also only has positive things to say about Bar Thursday.  He loves that he has the chance to talk and connect with some of the students in line.  Dave also points out that even with many people coming in on one night, the students are all very well-behaved.

When Will and Dave were asked if any other night of the week is as special as Thursday, they both agreed that nothing can quite compare.  Dave, however, did mention that Saturdays do get pretty busy, but not in the same way as Thursdays do.

It’s nice knowing that we, the students, aren’t the only ones enjoying Thursday nights, and that we can continue enjoying them together.  So be nice to the bouncers, tip your bartenders, bring your cash, and have an amazing Thursday. Cheers.

Get ready for finals with these tips