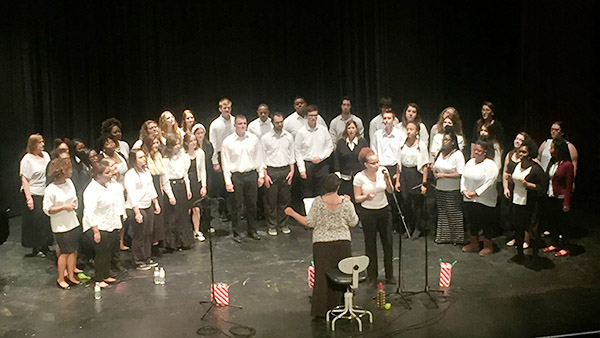 The McDaniel College Gospel Choir presented their Fall Concert on Dec. 11 to a packed house. The concert centered around “Put a Little Love in Your Heart,” a classic song that was not only performed, but closed out the show.

Director Shelley Ensor handled the choir with grace and fluidity throughout the concert as they filled the room with harmonious voices that rang out each song.

The concert began with an acapella performance by Voices of Praise, an offshoot of the choir, singing “Better is One Day” to set the tone for the rest of the afternoon’s performances.

Before each song, there was an introduction done by a member of the choir explaining the significance of the song and what it truly means for them to sing it.

A highlight performance of the afternoon came with the rendition of “Shebach,” introduced by Jada Pickens. The song is mostly done in Hebrew, with heavy guitar strings in the background. As the powerful performance continued, the choir invited audience members to join them on stage to sing and dance to the song. The crowd was energized and lifted by the key performance by the band. 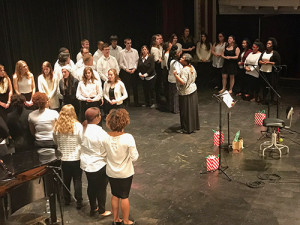 Gospel Choir’s sections (altos to the left, tenors in the middle, sopranos to the right). Photo by Elijah Jones.

“Perfect Praise” was another strong performance of the afternoon. The tenors shined during this performance as they had booming sets throughout the song.

Introducing the holiday spirit into the concert, the choir sang the classics “Carol of the Bells” and “Feliz Navidad”.

Tykia Harper, a senior here at McDaniel watched from the audience and said “It was great. I’d love to see it again. My favorite song was definitely “Feliz Navidad.” It reminded me of my childhood!”

To finish the concert, “Put a Little Love in Your Heart” was introduced by Christina “Sunshine” DeJoseph and spearheaded with a solo performance by Rachel Sentz. As Sentz rang out the lyrics, choir members began walking around the crowd handing out candy canes to audience members.

Choir member Ivory Smith shared her reasoning for being in the choir, stating that “Getting the opportunity to sing and minister with other people that has similar goals and mindsets as me is one of my biggest reasons for being a member of the choir.”

Director Shelley Ensor explained the joy she has in leading the choir by saying “Every semester the students in the choir just take me a little higher, I leave on Thursday walking on cloud nine. It’s more of a family than it is a class.”

The McDaniel College Gospel Choir will continue to perform as they are currently raising funds for a trip to Berea College in Kentucky for their Spring Festival at the end of February.

Movie Review: “Moonlight” Doesn’t Shoot for the Moon, Doesn’t Have to

The hidden meanings in horror films