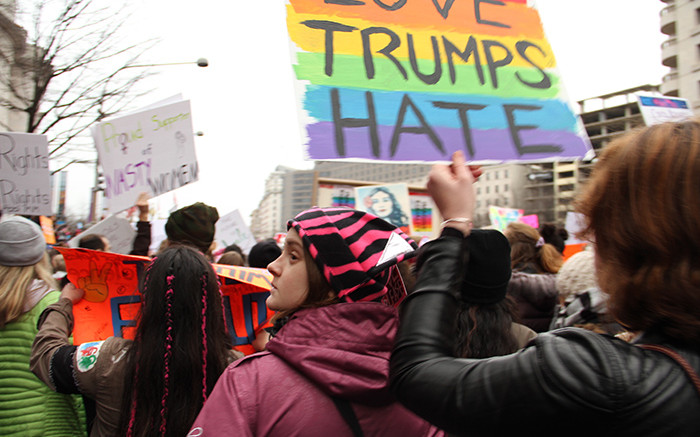 “There is one thing I know. You should never underestimate the power of a girl’s makeup; it can be anything. It can be a disguise. It can be war paint. It can give a girl confidence. Today, I think it’s armor.” 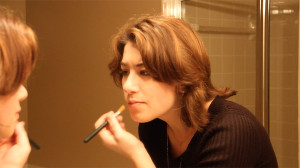 Darby Bortz getting ready to march. Photo by Jimmy Calderon.

These were the words of junior Darby Bortz as she got ready to march the morning of Jan. 21 at the Washington D.C. Women’s March.

For many McDaniel students, the news of the inauguration of President Donald Trump hit worse than the worst hangover they have ever had in college. Some students took this awful feeling and converted into action at the march.

These students, by no means representing McDaniel College, portray the dedication and passion young Americans have in regards to their civil liberties and their protection.

A slow start to a monumental movement

Although the march was greatly successful, it wasn’t free from error. One of the major criticisms of the march was the lack of organization and the consequences that followed.

Beginning with a never-ending list of speakers and ending with crowds of people moving erratically along the narrow streets of D.C., the march, though powerful, obviously lacked the organizational element of previous marches.

However, the organizers cannot completely be blamed since they only expected about 200,000 to show up (more than twice this figure was present), and the streets of D.C. are not the most ideal streets for a march of this size. 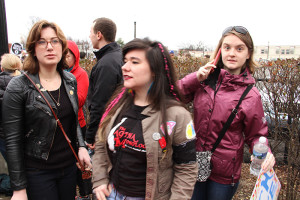 Goofiness ensues in the minutes prior to the march. Photo by Jimmy Calderon.

Due to the proximity of McDaniel to the nation’s capital, along with the fact that many students live within an hour of D.C., many students decided to come out and show their disdain for the new administration at the Women’s March.

Such was the case for Jen Shillingburg, Darby Bortz, Jasmin Chavez, and Emma Carter, among many other students.

For many of the students, the march meant more than a simple outburst of anger and, rather, it represented the beginning of a movement. As sophomore Jasmin Chavez puts it, “As [part of] a minority group, I feel that it was very empowering to see all communities of color and white women coming together for the same cause.”

She continues to emphasize how the last march of this magnitude happened in the 1920s and how this march was “a great display of how coalitions are being built with different minority communities.”

This sentiment was shared among the thousands of women of color who attended the march.

When asked about her motivation to attend the march, senior Jen Shillingburg, highlighted that “a lot of the women that inspire [her] are going.”

She continued to add, “I’m sure that the historical places the march will pass by will give us more motivation,” regarding the energy of the march. The influence of the D.C. historical sites was indeed felt, especially when the march crossed the Mall, where President Trump’s inauguration had taken place the previous day.

A step into a better future 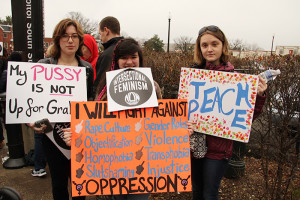 Mariah Ligas, graduate student, stated, “There has been so much anger against marginalized groups, anger that has always been there, which we have ignored until this past election cycle.”

For Ligas, like for many others, this has become a scary reality that must be faced before progress can be achieved. As many of the speakers at the march pointed out, this is a time of change. Ligas believes we can move past this hatred and once again become a united nation.

“I’m a teacher, and although I teach German, I want to make sure my students leave the classroom being a better person. That doesn’t mean preaching politics at them. It means being a good role model for them.”

Welcome from the Editors