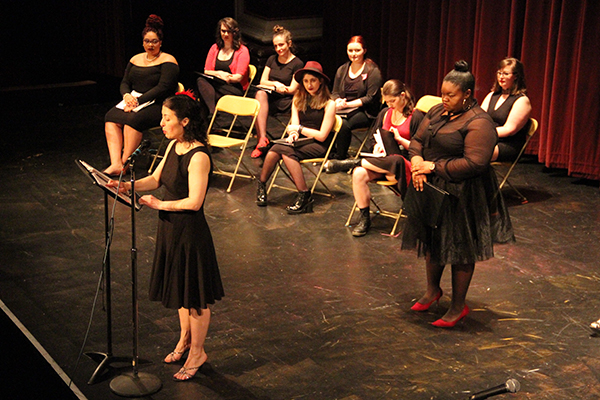 For the fourteenth year in a row, the cast of “The Vagina Monologues” delivered a powerful roar of resistance, keeping up with the momentum of women’s empowerment built by the Women’s March on Washington this past January, amongst other feminist movements.

As usual, the show was open to the public for two nights—Feb. 3 and Feb. 4—and welcomed members of the McDaniel community, as well as members of the Westminster community. This year’s director was Jen Shillingburg, senior and psychology and theater arts double major.

“This show is many people’s first taste of the female voice,” states Shillingburg. “It was my first taste of true feminism, and that changed my life forever. But if it’s your first time, don’t let the no-no words scare you. ‘Vagina,’ ‘feminism,’ ‘sex worker,’ ‘rape,’ ‘cunt,’ ‘revolution’ are all words you’ve been conditioned to treat a certain way. I challenge you to listen to our interpretations of them with your brave face on and your mind open.” 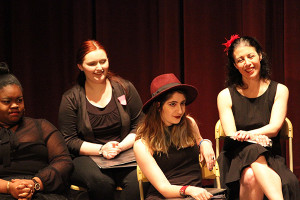 Reactions from the cast. Photo by Jimmy Calderon.

The lineup for this year’s show was very similar to last year’s, including monologues such as “The Flood,” performed by Alex Leonard; “The Woman Who Loved to Make Vaginas Happy,” performed by Megan Smith; and “They Beat the Girl Out of My Boy (Or They Tried),” performed by Jazzy Smith, Lillian Rosenquist, Maggy Self, Mary Lib Minter, and Alex Leonard. This last monologue was performed in the style of a Greek choir, a stylistic choice by the director to enhance the message of the narrative.

In keeping with the spirit of Eve Ensler’s vision, the cast members were encouraged to write their own monologues and share their stories. Megan Smith and Bailey Boyle both shared their monologues, while Kelly Gibson and Kiah Hyman shared their personal stories of struggle and perseverance.

In a brief interview with Smith, she shared that her vision for next year is to include more personal narrative into the performance, a move that will bring the McDaniel community closer together. 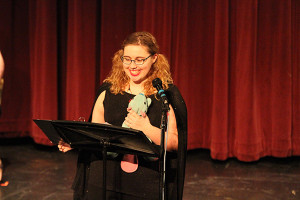 Jazzy Smith, senior and member of this year’s cast, felt bittersweet about being part of the cast for the last time. She expresses, “I’ve bonded with each and every woman that I’ve shared the stage with. We became a family; we talked, laughed and cried together and while I’m proud of all that we’ve accomplished and all of the women that were a part of the cast, I’m a little sad that next year there will be a completely new cast of vagina warriors and I won’t be on it.”

Sam Bouton, freshman, says, “The production was really good, and I was happy that the proceeds went to charity,” explaining why she went to the performance on each night. She adds, “I’m thinking about joining next year’s cast.” Bouton was excited to go to the performance after having read the play in her FYS “Gender, Literature and Culture” with Becky Carpenter.

Overall, the performance was a success and the message was delivered through the amazing performances of this year’s cast.