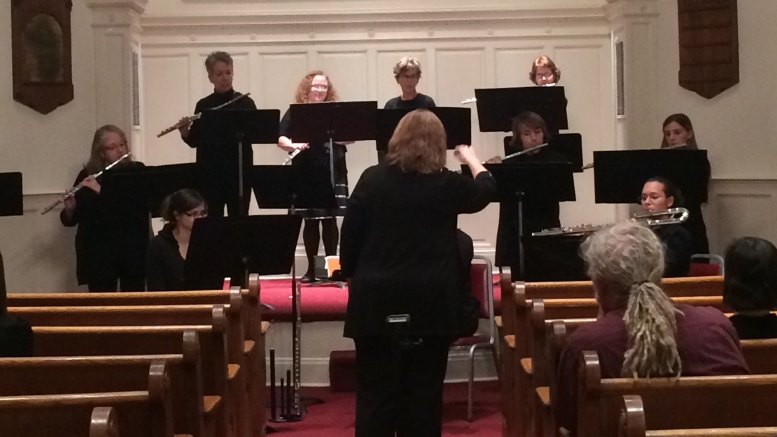 On a dark mid-autumn evening, a warm light spilling from behind the stained glass windows of Little Baker Chapel stood out from the dusky drape of nightfall.

Inside Little Baker, warmth came from the goings—on in the tiny chapel—the audience’s chatter, the fluttering of woodwinds warming up in the pews, the friendly pre-performance small talk on stage. Everyone awaited the start of the night’s performances by McDaniel’s student chamber music ensembles.

After a brief introduction by Dr. Kirkpatrick, the director of the night’s ensembles, and after the quick, mandatory tune to B flat, the music began.

First to perform was the McDaniel College Woodwind Quintet: the group consisting of flute, bassoon, clarinet, oboe, and French horn started the evening with “The Jolly Raftsmen,” a playful piece with a robust melody that featured points of dissonance—a clash of notes that usually sounds unpleasant to listeners. In “The Jolly Raftsmen,” however, it couldn’t have fit better with the piece’s bold spirit. 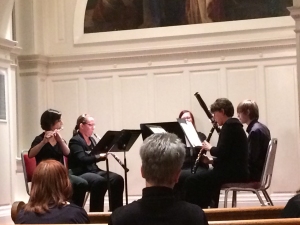 The Quintet’s next and last selection was “12 Variations on ‘Ah! Vous dirai-je, Maman’” which was, in fact, the well-loved “Twinkle, Twinkle Little Star” hiding behind an unfamiliar name.

Following the Quintet was the McDaniel College Flute Choir, who played several pieces which all had significantly different styles. “Spanish Love Song” captured attention with its melancholy, morose melody and its clear, somber solos.

Perhaps the flute choir’s most interesting and difficult piece was “Walk like This!” In this piece, the flute choir introduced the audience to entirely new sounds—“stage-whispers,” when a flutist would actually whisper into the flute; a loud, swishing sound made by blowing into the flute; and even a kind of flute singing, where the performer sings at the same time as playing the flute.

The last group of the night was the McDaniel Flute Quartet. Their selections consisted of the light and airy movements from “Quatuor,” a piece written specifically for flutes.

The quartet continued with the familiar “Irish Aire and Jig,” which was followed by the haunting, beautiful melody of “Die Moldau.” 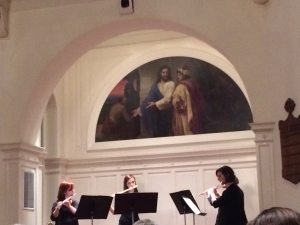 The group concluded their performance and the night with “Salt of the Earth,” which told the story of life on the Oklahoma prairie through two sections: one calm and airy to tell of its beauty, the other busy, dark, and boding to recall the struggles of living in the country.

The Music Department’s Student Chamber Music Ensembles concert filled Little Baker with diverse, intriguing music played by incredibly talented musicians. Every piece had its own story and sound—which were made all the more engaging by the ensembles’ togetherness and passion for playing their instruments.

If you’re looking for a great performance, or just want to hear new music, follow Dr. Kirkpatrick’s advice—and “come again in the spring.”

Bringing Happiness Through the Waves of the Pool