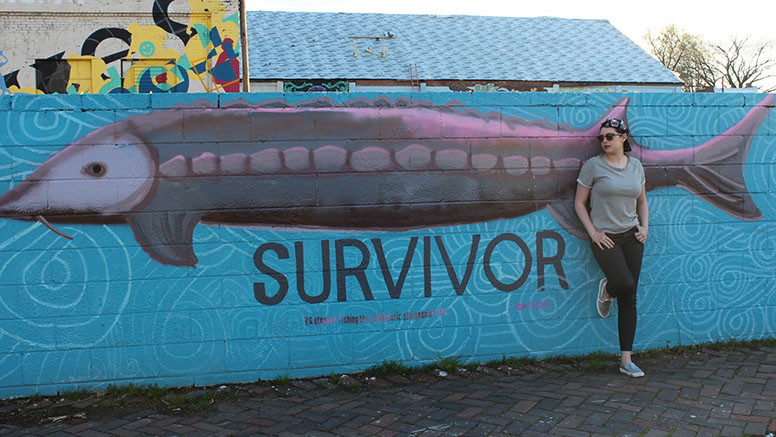 Seventh grade and finding bald patches. Seventeen and watching clumps of hair fall from her fingers into the drain. 40 years old, advanced ovarian cancer, and a bald head under a colored scarf. They have never met, but each of these women have fought the battle of significant hair loss from serious illness together and triumphed.

In 2009, 13-year-old Mackenzie Tabler got a haircut. Chunks of hair started to fall from her hair line. Thinking it was the aftermath of “just a trim,” she took no notice until a bald spot grew larger on the back of her head. Her dermatologist later diagnosed her with Alopecia Areata, an autoimmune disorder that mistakenly attacks hair follicles on all parts of the body. By the end of eighth grade, Tabler was completely bald and would be for the next five years.

She wouldn’t be “crazy Kiser” without the wild, blonde ringlets that framed her face, but at the age of 17, Rachel Kiser was diagnosed with an aggressive cancer and her characteristic curls were replaced by a bobbed wig to cover her balding head. Refusing to give up, Kiser found joy in the smallest moments of regrowth, like putting on mascara and shampooing even the tiniest of fuzz atop her head. In continuing to fight against the judgements of others, she chooses to wear her new, dark hair in a classic and empowering cut.

The average age of diagnosis for ovarian cancer is 64. Cindy Priolet, diagnosed at age 40, now battles her third bout of advanced cancer and frontline chemotherapy drugs. Before the treatments began, she was known for her thick, blonde curls and was even voted “Hair” at her Ponca City High School Class of ’88 reunion. As of a year and a half ago, she dons a head of short, dark brown waves atop her head.

“I vividly recall the first time I lost my hair when I removed some sort of hair-holding device, and the hair just stuck out anyway in that position, plastic and dead. I was horrified.” Priolet remembers her husband then grabbing the scissors and chopping it off. Feeling depressed and helpless, she neglected to wash or brush her hair unless necessary in hopes of maintaining some amount of control over it. In this sense of weakness, each of the women similarly fought for control and independence from the circumstances. For Kiser and Tabler, it was a wig.

A wig covered some evidence of illness as well as their exposure. Tabler reveals that it took a long while to accept herself and her Alopecia, so she used the wig to hide from it. In an attempt to be “normal,” she kept her condition a secret under the synthetic crutch glued to the top of her head.

In similar fashion, Kiser chose to wear a wig simply because “people treat you differently.” Even for an afternoon trip to the grocery store, she set the blonde locks atop her head and braved the public’s eye. Kiser describes the sense of pity being thrust upon her as the worst part of her circumstance even amongst isolation, depression, and fear. Being seen as a “helpless bald child from a Saint Jude’s commercial,” she remembers people staring, praying with her, and even rubbing her head. Her wig was an effort to be normal and escape the pains of her cancer. “I hid it like a dirty secret, but I still knew the truth, and it didn’t make it better.”

In contrast, Priolet decided against a wig as she “was not ashamed of having cancer” and “didn’t want to deny that being a cue ball” had been such a significant part of her life, so she opted for a chemo-cap. Wig or head scarf, each woman felt that her choice of head covering screamed “I’m sick” to the world. This outward, visible sign of their condition made it even more difficult to hide. While generally met with inquiring looks or lack of engagement at all, several instances of “total compassion, kindness, and helpfulness from others” stand out.

“I have never felt more love than I did that year when I started telling people I had Alopecia,” writes Tabler. Her senior year of high school, she went to school without her wig. Though a challenging day, the experience and positive reactions of others laid ground for a new confidence and self-acceptance. In her courage, she also attended the Annual Alopecia Conference and was able to get to know others in her shoes, finding comfort in common ground. Kiser found similar bravery within herself to reach out to other patients, even passing on a handmade cap along with remarkable advice to a newly diagnosed young girl. Finally, Priolet recalls friends lending her beautiful head coverings as well as a trip to the American Cancer Society with a dear friend in search of a wig.

Though the challenge of hair loss due to illness is mighty, all of these women have found strength and identity in their circumstance, and each has experienced regrowth. Tabler now sports a brown, shoulder-length style and has been controlling her Alopecia with ointments, steroid shots, and anxiety medications to limit stress. Kiser loves her bold, brown cut, often styling it with pomade for a modern day “greaser look”, and Priolet has grown back a darker “do” that she wears short atop her head.

There is no glamorizing the trauma, uncertainty, and helplessness that comes with hair loss. Whether it be from radiation treatments or the effects of a disease itself, watching identity and expression fall from the top of one’s head will never get easier—not with age, not with promise, and not even the third time around. Accepting the circumstances of hair loss due to a life-changing illness can be a daunting challenge. However, the stories of these three women prove that, while an immensely difficult and long process, it can be done.

Tabler sums up the experience well, stating, “Don’t let it tear you apart. Don’t let it change you. Don’t let it become the thing you fear most, and remember that bald is beautiful.”