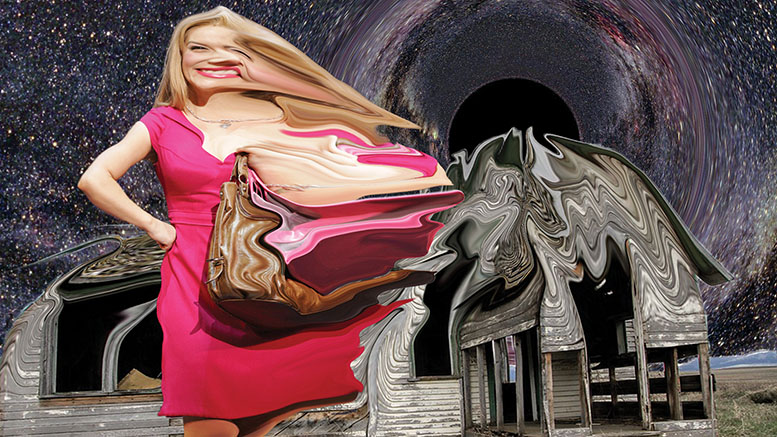 Elle Woods being pulled into a black hole, never to escape. Image by Ida Logg.

This film was special to me in my younger years, but what was once believed to be a feel-good movie about a girl’s rise to independence and power offers little escapism from the cruelties of reality; rather, it reminds us of them and even contributes to real-world problems.

We are unsurprisingly introduced to the setting of “Legally Blonde” through a montage of scenes accompanied by music. Just as we think this is over, we launch right into yet another song. Interestingly, this helps distract from the agonizing story at hand, though one grows impatient and hopes that the film will hurry up and bring on the inevitable pain.

Aside from our concern for her sorority sisters’ apparent deification of her, Elle attracts our attention to her preparations for a date in which she and her followers/sisters believe her boyfriend, Warner Huntington III, is going to “pop the question.” The girls’ seeming fascination with the engagement itself rather than the affection of the pair confirms our internal screams that “love” is a lie.

Thankfully, the film throws in an ironic twist, in that Warner actually breaks up with Elle. To much amusement, he states “…if I’m going to be a senator, I need to marry a Jackie, not a Marilyn.” It is at the point of their break up when Elle finally says “But I’m seriously in love with you!” Does she love him, or does she love the idea of him? Or does she just enjoy the sex?

Elle’s post-breakup depression is puzzling. From the perspective of a viewer in 2017, this doesn’t seem to portray depression too well – people already spend most of their time vegetating with some kind of screen in front of them. We have to take more drastic, pointed actions nowadays if we fancy crying out for help.

A moment of grand honesty comes when Elle’s “friend” says, “Elle, I know you’re all upset about this, but can’t you just take a Percocet?” Through this, we feel for the first time joined to this strange pre-recession and ominously unified world. We again sense connection when Elle submits a video to Harvard rather than an admissions essay: there is some eerie foreshadowing of the decay of human sensibilities, and one can’t help but think of the “video” disease that has overtaken social media feeds, which are a disease to humanity within themselves.

It’s when Elle takes the LSATs that we begin to reflect on how this movie depicts and encourages real-world problems, namely the vast overpopulation of law schools, and higher education in general. Tons of students filled the exam room – way too many to fill the meager employment opportunities in legal fields, should they even get into an actually good law school or bother going into law at all.

When Elle’s results arrive at her sorority mansion, Elle’s worshipers surround their cult master in the main lobby, where they learn she received a 179 on the LSATs, somehow.

Elle’s arrival at Harvard gives us a lot of ripe material to work with. All of the snickering and gawking among students reveals the arrogance of where Elle has arrived. These students are also clearly not only adhering to their rigid social roles, but attempting to enforce them as well.

Since we’re all actors playing the part of who we apparently are, we miserably relate to this enforcement of society’s rigid stereotypes in what could now be labeled as micro-aggressions. Yet, we know that most of the students at Harvard Law were largely destined to be there from birth, so we understand why they so pervasively try to enforce the “script.” This theme is again brought up at an orientation activity in which one can’t help but question whether or not her peers’ confusion is the result of Elle not having been broken yet.

We then have the opportunity to endure watching a professor attempt to establish her regime through intimidation. Through the use of what we learn is the “Socratic method,” students are essentially pitted against each other rather than forming camaraderie. This will surely prepare them for the life of alienation ahead of them.

Professor Callahan is more direct in his tactics, and is honest in his statement “now let’s commence with our usual torture.” And indeed, Elle not being allowed in any study group reminds us that graduate school is more competitive than our undergraduate nanny state.

The “turning point” for Elle, i.e. her actually beginning to figure out how to “law school,” is represented in a grossly inaccurate light. The film does this in the form of yet another montage, since graduate school is so easy that aimlessly putting in effort is enough to survive. We see very little, if any, internal turmoil other than that related to her anger and jealousy, but we know that a real graduate student would likely suffer mentally and emotionally to a level far greater than what we see in Elle.

This is sadly where the movie is most effective in its escapism, contributing to a widely held obsession with higher education. One wonders how many “sheep” have been herded off to college, or even law school, because of this torturous movie.

Elle’s befriending of Paulette Bonafonté introduces us to a surprisingly postmodern character. Paulette is a high school dropout who can barely bring herself to talk to her romantic interest (the UPS guy at her salon), and who doesn’t seem to place much emphasis on material wellbeing; rather, she is concerned with getting her dog back from her ex. Eventually this is done: while Paulette is unable to confront her ex, Elle steps in ready to play the part of an attorney, regurgitating a torrent of hollow legal jargon, which unsurprisingly proves fruitful.

Paulette’s crippling self-doubt is refreshing and intensely relatable. One most easily sympathizes with her upon her statement “Oh, come on, what’s the point?” when told by Elle to make modest advances on the UPS guy. At least Paulette got her dog back, which will slightly distract from her emptiness for maybe a few years, at most.

The famed “bend and snap” scene is utopian, if not disturbing. It reminds one of a time when flirtation, and human interaction, actually had perceived meaning. Now, most of our interaction is virtual and idiotic flirting techniques such as this have vastly diminished practicality. Few of us have the courage to even flirt in-person.

Apparently our fear of rejection overshadows our craving for relief from our intense isolation and loneliness. Weird. Also, the level of entrancement of those in the salon perhaps sheds light on one of Elle’s techniques in attempting to deify herself wherever she goes.

The film seems to conform to the “law of attraction,” i.e. the idea that attraction between two people is always mutual, an idea now most prevalent on lonely corners of the internet where the isolated masses flock, hoping that there can be any light in the void that is their romantic aspirations. Spoiler alert: there is no light.

Towards the conclusion, Warner finally believes that Elle is good enough for him, but she turns him down. Indeed, the power of revenge is more potent than that of hope, desire, and the like. It was very interesting that the lust for vengeance and the winning of a competition between Elle and Vivian Kensington (Warner’s then fiancé) seem to be Elle’s enduring motivations. Is this the best description of what it means to “love” someone? Just throw in a substantial sexual component, and you probably have a description rigid enough to satisfy society.

By this time, Elle was also probably closer to Emmett Richmond, and let’s not jump into a separate analysis of whether or not these two loved each other, or if they were at the mercy of the factors of proximity, desperation, and their hellishly busy lives.

At graduation, Elle has by this time again managed to achieve a level of deification amongst her peers – she’d make a great postmodern political candidate. Anyway, she goes on to state, “…I have come to find that passion is a key ingredient to the study and practice of law, and of life.” This, of course, annoys us with its shrill and unnecessary optimism, but also proves amusing due to the “passion” we’ve seen in Elle throughout the film: anger, jealousy, and futile competitiveness.

Overall, “Legally Blonde” will make you want to bend and snap… your neck.

From the Archives: The Many Faces of McDaniel’s Student Newspaper