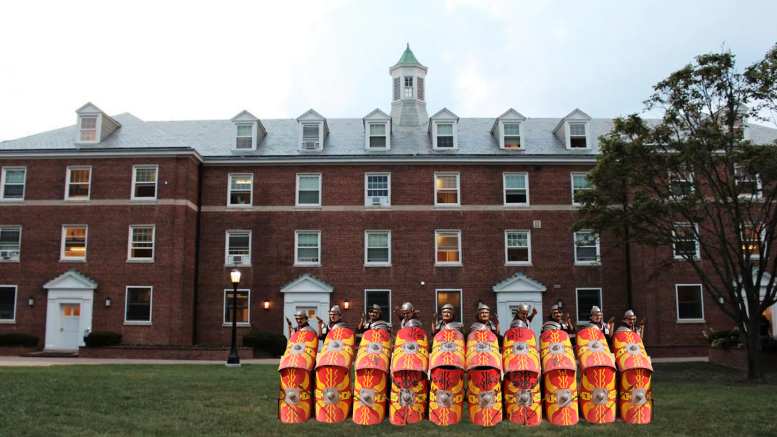 Brothers from the PHI legion gather in front of ANW Hall prior to their bid day celebrations.

Posted By: Atticus Rice, thinks his name is relevant March 30, 2017

It’s no secret that Greek life on campus has been in a slow decline over the past few semesters. To make up for it, some students have turned to a new style of social living.

Formed by a group of first-years who were immediately disgruntled by the social life on campus upon moving in last fall, Roman life has taken the campus by storm in recent months with six new organizations popping up at McDaniel since January.

“I’m really excited that we were able to make this happen,” said Daniel Briggs, who requested to remain anonymous, “Without an organization of close-knit connections like what we’re creating I don’t think I’d be able to make it through college,” the first-year added.

While many students have been turning to other student organizations to fill their time outside of the classroom, others haven’t been able to find something to appease their extracurricular calendar. “I’ve never seen myself as one to go Greek,” said Adam Hayes, “but there hasn’t been anything else out there for me to join,” the first-year complained.

Evidently overwhelmed by the extensive number of extracurricular opportunities at McDaniel, Hayes has found himself a part of this newly formed group of students on campus. The group began meeting back in September in an attempt to bring something to college campuses that they feel has been lacking for hundreds of years. After months of deliberations and late-night meetings, Hayes and his group settled on resurrecting Roman life.

McDaniel’s first legion, BAE, started with 13 members in late January. They plan to take their first class of new members in early September. Briggs, one of BAE’s founding members, is looking forward to the fall when their chapter will expand. “I think it will be really great to show this campus and the social community that we’re able to provide something that Greek life isn’t,” he said.

QUE, founded by Hayes and his friends, is currently McDaniel’s largest legion, boasting a full 23 members. They expect to expand in the fall. “We’ve received a lot of positive feedback,” Hayes said, “I think by the time recruitment comes around in September we’ll nearly double our members.”

While Briggs and Hayes established their legions on contrasting principles of social enhancement and academic enhancement, they both agree that changing McDaniel’s social scene is an essential necessity to making life on the Hill fun again. “It’s just something we’ve gotta do, there’s no doubt about it,” Briggs said about Roman life’s impact on the campus.

BAE and QUE are joined on campus by MCD, PEE, PIE, and NAY.