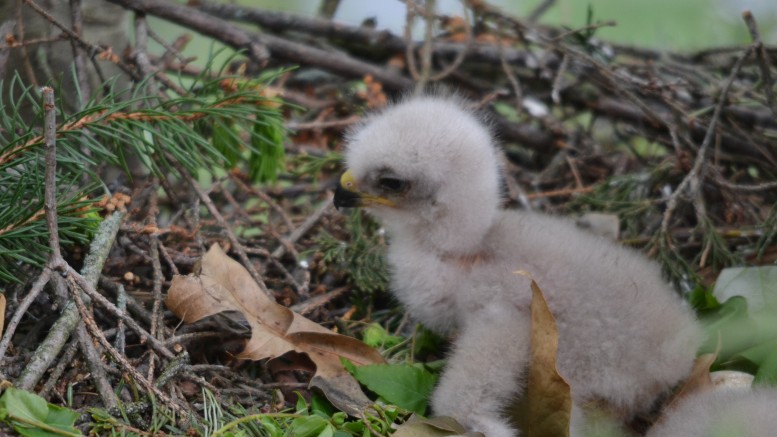 A hawk chick outside Whiteford Hall. Photo by Matthew Ogorzalek.

Posted By: Matthew Ogorzalek, Contributor May 5, 2017

McDaniel is not only home to the Green Terror, but also home to five hawks—three of them chicks. Freshman Hannah Smith lives in Whiteford Hall, and recently discovered three eggs underneath a mother hawk in a tree outside the freshman dorm.

On March 23, Smith found out these two feathery friends had been living outside her dorm, three more little eggs with them. She discovered them as she was leaning out her window. Smith was first met with the aggression of one of the birds: the male bird tried “taking off her face.” The hawk flew at her, trying to scratch her with his talons.

Each morning, Smith gets up to check on the hawks to see if there is any new activity. Ever since her discovery, she has been hesitant to hang her head out the window in case the hawk’s talons scratch her. Another one of the hawks is a female Smith has named “Sitty”—since, according to Smith, she spends most of her time sitting on the nest. 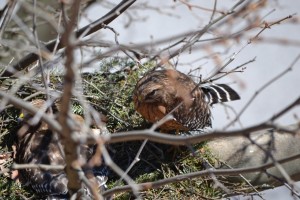 One of the parent hawks. Photo by Matthew Ogorzalek.

Recently, Smith has reported small white feathers surrounding the nest. She speculates that the male hawk has been catching small birds from around campus and bringing them back to the nest to share as a meal with Sitty. As the weather has started getting warmer, Smith and Horner have noticed that when Sitty overheats, she opens her beak and spreads her feathers out.

Smith feels as if the hawks are now a part of her life. Every morning she goes to check on them. Sometimes, she will sit by the window and watch them.  Some days Smith wakes up to one of the hawks screeching—these are days that she wishes they weren’t there.

On April 26, Smith reported that the eggs hatched. When asked about the hatching, Smith said, “they look like little grey poof balls.” Smith sent a text to several of her friends, letting them know that “the babies have hatched!” Smith said that the day that they hatched, she leaned out her window and the male hawk once again flew at her. She had to jump back into the room.

Despite these “poof balls,” McDaniel students have been urged to take caution around the hawks’ nest.

What’s all the Bark About?