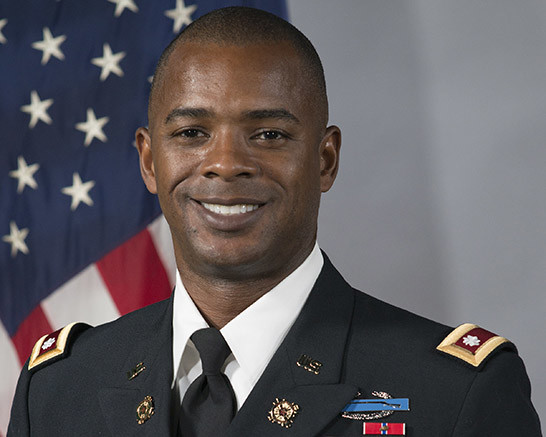 This year, McDaniel College ROTC welcomed a new Professor of Military Science, Lieutenant Colonel Donyeill “Don” Mozer. Mozer, an active duty service member of 17 years, was selected to serve with the Green Terror Brigade, and began working with the group this semester.

Mozer states that one of his major goals will be to continue the expansion and improvement of the ROTC program on campus, through a mix of facility improvements and creating new opportunities for cadets to interact with alumni and other members of the military.

“We are really excited about army ROTC at McDaniel,” said Mozer, “we’re really trying to bring it into the 21st century. The four things that we teach are problem solving, critical thinking, management skills, and cultural awareness, so, at this point, we’re really looking at the hundredth anniversary [of McDaniel ROTC] in 2019 and trying to ensure we have all the necessary resources to make sure we can create cadets that have all those skills.”

He noted that some major projects in the works for McDaniel ROTC included facility updates that would help improve the training for cadets, including the possible development of a land navigation course at Singleton-Matthews Farm, the creation of an obstacle course for cadet use, and the creation of a firing range somewhere near campus to help cadets do marksmanship training.

He also hopes to continue to develop and grow the McDaniel ROTC alumni association, so that graduates of the program can give back.

Mozer also stated that he hoped to continue to design the best curriculum possible for the cadets, with trained instructors capable of teaching them the skills needed.

“We’re trying to ensure that the instructors we bring here have all the right training, and have at least a master’s degree,” said Mozer, “that’s one thing that we require.”

Beyond improvements to the facilities and faculty, Mozer also hopes that through his connections he can introduce cadets to a variety of unique experiences that will both educate and give them an idea of the different paths their involvement in ROTC could lead them down in the future.

Included in these experiences are educational trips, such as the recent staff ride at the Gettysburg battlefield, and visits to various government organizations that might employ cadets after graduation, including tours of the Pentagon and the State Department.

“We’re trying to make sure we expose the McDaniel College cadets to all the different facets of government and different ways they can serve their country even after they get out, whether they do twenty years in the military, or they just do their commitment of four years,” said Mozer.

He recommended that anyone who was interested in ROTC should reach out to him or to his recruiting officer.