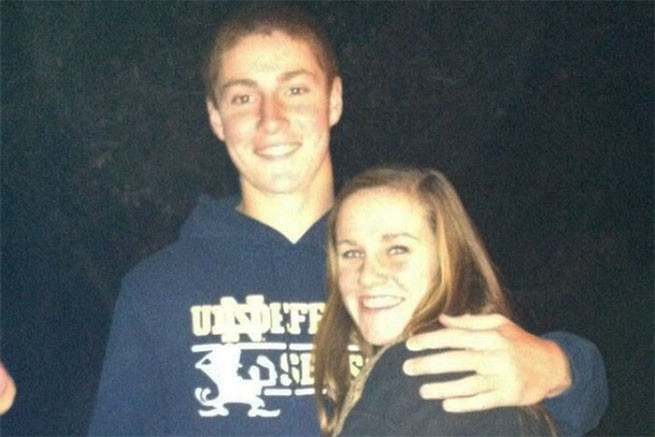 On Feb. 4, at Penn State University, a young man died at the hands of his “brothers.” Tim Piazza died after running a gauntlet of drinking stations at Penn State’s Beta Theta Pi fraternity house during a pledge event, where potential members, who had just received their bids, had to chug beer, wine and hard liquor as quickly as possible before moving on to the next stop.

Later that night, Piazza fell down a flight of stairs to the basement of the fraternity mansion and lay unconscious for hours. He was later carried upstairs by fraternity members, who tried to revive him by slapping him and pouring liquids on his face. Twelve hours after his initial fall, fraternity members debated for 40 minutes about whether to call for help as Tim Piazza’s life ticked away, according to police reports. Finally, an ambulance was called.  His injuries included a fractured skull, ruptured spleen and a collapsed lung.

Hazing, defined as  “the imposition of strenuous, often humiliating, tasks as part of a program of rigorous physical training and initiation,” is a huge issue across the United States, but has yet to be addressed by McDaniel College. Yes, we had an anti-hazing week. But how many people actually learned or participated in the activities? The anti-hazing week really only targeted Greek Life here on campus. McDaniel’s Greek Life is about 16 percent of the total campus, but hazing is not only an issue within the Greek Life system. While only 16 percent of the campus is greek life, 34 percent participate in athletics, which have been known to haze as well. Our campus has yet to talk about the taboo topic of hazing as it really is.

As someone who has personal ties to Piazza, having grown up with him and been good friends with him through high school, his story needs to be shared. The members of the Beta Theta Pi fraternity took his life from him. They forced Tim and the other pledges to drink an excessive amount of alcohol on the first night after receiving a bid; they wasted no time trying to show “dominance” and “authority” to the pledges.

No person should ever be forced to do something against their will, especially one that puts them or others in danger. This topic is so serious and yet neglected, even by those it’s happening to.

The most commonly cited study on this topic was conducted by researchers at the University of Maine in 2011. In a survey of 11,482 undergraduate students from 53 colleges and universities, the researchers found that 55 percent of all students involved in collegiate groups witnessed or experienced hazing. However, the study indicated that only 5 percent of the hazings were reported to college or law enforcement authorities.

Hazing across the country is being ignored and swept under the rug. We cannot let that happen here at McDaniel College. There is a distinct difference between learning traditions, rituals, and giving respect to older members of an organization and the forced obedience of hazing.  Being knowledgeable and aware of hazing will help prevent it here at McDaniel. It starts with people here on campus. If you hear something say something, so we don’t have to lose another innocent life to hazing.