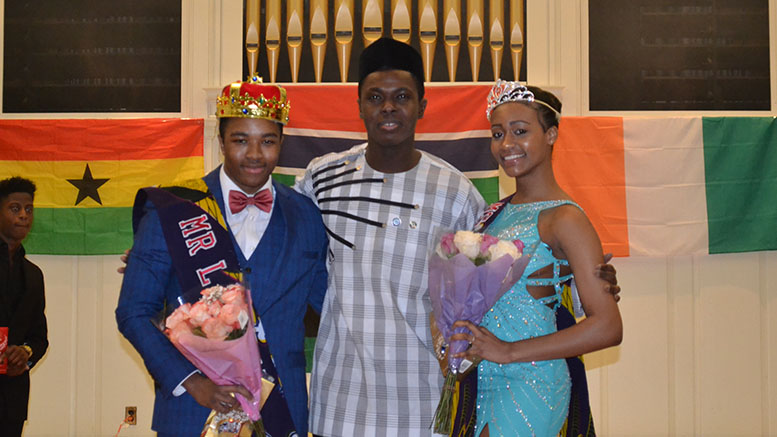 People might be surprised to know who Francis Aubee really is. The McDaniel student has been described as charismatic, intelligent, cultured, well-mannered, hilarious, business-minded, and more.

Aubee is an international student from The Gambia; he also lived in Nigeria for five years and is well-traveled, having been to countries like Senegal, Ghana, Germany, and France. For fun, Aubee loves soccer – in his spare time, he unwinds by playing FIFA soccer with his friends. He also loves outings, food, relaxation, and nap time.

Professionally, one of Aubee’s goals is to get involved in Gambian politics and economics. He keeps himself up to date with the nation’s political, economic, and social news.

For now, though, Aubee has a full schedule. He has been the president of Africa’s Legacy since the beginning of this semester, and he was not afraid to take on this position.

“I felt like I was part of the Legacy family,” he said. “[The club’s] jovial nature was amazing to see, and this was even before I attended my first meeting.” He said that when he finally attended a meeting, he was overwhelmed with joy at the diversity and passion the members exhibited.

The first memorable event for him was his first UNITED, an annual celebration held by various cultural organizations on campus. Aubee said he thought the dance performances at the event were “electrifying.” He also said the event had a lot of energy and that the African food was one of the best parts.

Since then, what has surprised Aubee the most about Africa’s Legacy is the creativity and passion he has seen when members organize events and put on shows. Aubee said that the “wonderful ideas that members come up with is quite unbelievable.”

One of the biggest challenges that the club has encountered, Aubee said, is “holding onto members so that they attend meetings regularly and remain a part of the club.” One problem, he said, is keeping seniors coming to meetings, as they become busy with their capstones. Aubee said he wants to see more efforts in the future to recruit members and to keep them engaged and involved.

Another challenge that Aubee is up for is service, which is a requirement for any club at McDaniel.

“Personally, volunteering or making donations always fills me with joy and happiness,” he said. Aubee likes that he can share his time and resources. “Legacy should be embarking on more volunteer work this year,” he said about his plans for moving forward with the club.

His other goals for the club include increasing attendance and participation at meetings, as well as working on outreach. Aubee also wants to change the perception of Africa’s Legacy.

Aubee is currently “working on rebranding the image of Legacy from any negative perceptions that might still linger,” he said. He has started working on changing the constitution and has added an educational component to their meetings’ agenda. Aubee said that he wishes people knew more about the club’s “diversity, beautiful heritage, our calabash talks, on-campus events, and more about the African culture and continent.”

Regarding his strongest beliefs about Africa’s Legacy, Aubee believes that the club is “a united family.” He believes the club can rise above any misunderstandings.

Communication within the organization is crucial, so that “any misunderstandings should be solved internally and not externally.” People should be able to “separate personal feelings and emotions from club activities,” Aubee said. Aubee wants to see “a wonderful, happy family that serves as a support system for everyone.” He thinks that it is important to “just have fun; we are here for a short time.”

“I would love to keep expanding the Legacy name in a positive light,” Aubee said. He believes that the club has the most talented and brightest people.

Aubee was chosen by the members of the club to become president of Africa’s Legacy because he was seen as a neutral party to the relationship between the executive board members.

“I was seen as a neutral, principled, effective, and forward-thinking individual,” Aubee said. “I was not voted for, but rather selected.” For Aubee, that felt more personal.

Aubee said that it has been an honor to “serve members of Legacy and to represent the club on the McDaniel campus.” He has embraced the leadership and the responsibility the job has come with. He said that being president has made him work on his discipline, ego, planning, organization, and time management.

One word Aubee used to sum up being president so far is “exciting.” He stated that if he were not president, he would still be involved with Africa’s Legacy in a different way.

To Aubee, Africa’s Legacy is a “big and wonderful family that I have been fortunate enough to be part of.” He said that it is a club you have to experience, rather than just hear about. He hopes for a successful semester and a wonderful club dinner in Fall 2018, as it will be his last semester here at McDaniel College.

“I believe in Africa; as President, I believe I can educate people, promote the diversity of Africa and build bridges and destroy misconceptions.”

From Transfer to Terror