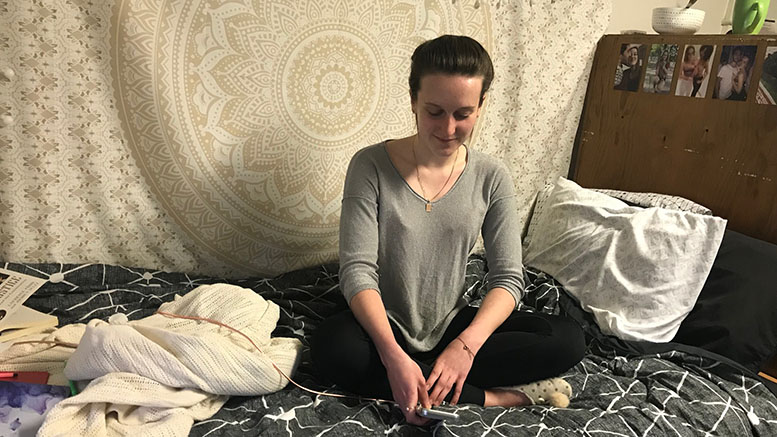 On a chilly snow day this semester, Svetlana Bochkova sat on her bed in her Pennsylvania Avenue house, writing an essay for one of her classes. She was thankful for the day off – the exchange student from Belgium used the time to catch up on her heavy workload that is, for her, a unique American experience.

“It’s totally different,” Bochkova, 20, said with a smile as she compared college in the U.S. to her home school in Belgium’s capital city of Brussels, which puts more weight on end-of-year exams than smaller homework assignments.

Bochkova is among the group of more than 30 international students studying at McDaniel this spring semester. At home, she studies political science at Belgium’s Saint-Louis University, which has shared an exchange program with McDaniel for more than 10 years.

Before arriving at McDaniel – before Saint-Louis, even – Bochkova’s lifestyle was rural, a far throw from either university. She has called several towns in Belgium home after moving from Russia, where she was born, shortly before her third birthday. Her home in Belgium now, Baulers, is a small town speckled with farms 20 miles south of Brussels. Bochkova said living in a city is a significant change.

“It’s very different from here because here, everything is so big,” she said. “Rural in Belgium means really tiny, and everyone knows each other,” she said.

It was during her schooling in Belgium that Bochkova learned three new languages. Shortly after moving from Russia, she learned French at her primary school and later learned Dutch – both are official languages in Belgium.

Bochkova began learning English at 12; this, along with her determination to study abroad, became an important factor in choosing to study abroad in the U.S.

“The exchange semester is a must,” she said. “I felt like the States would be the best place [to study abroad] because it’s an English-speaking country.”

Saint-Louis offers its students exchange programs at three universities in the U.S. Bochkova settled on McDaniel for its proximity to destinations like New York City and Washington.

“The first day was a bit fuzzy,” she said. Bochkova was exhausted after an eight-hour flight and a three-hour wait in the airport’s passport cue – not to mention hungry. Her first trip after arriving on campus was to the grocery store.

Bochkova was in the kitchen the next day when her Pennsylvania Avenue housemate Craig Grunewald met her for the first time. Grunewald had not known that an international student would be moving into the single left vacant by a housemate studying in Budapest.

The junior said he likes sharing stories with Bochkova.

“She tells me about her culture; I tell her about my culture,” said Grunewald. He said he enjoys teaching her American slang and, in turn, learning details about Belgian culture. One of the ones he’s found most interesting is the difference in how people dress.

“She says we wear ‘pajamas’ [to class] because to her, sweatpants are pajamas,” Grunewald said. He noted that his new housemate often dresses more formally than other students when she goes out – Bochkova said that it is rare in Belgium to see students wearing athletic gear.

All things considered, Grunewald says, the differences in culture and college fashion choices are minor.

“She’s done a pretty good job of acclimating herself,” he said. “[Living with Bochkova] is not that different from living with someone who lives down the street.”

One other person who has seen Bochkova succeed at McDaniel is Herb Smith, Ph.D., one of her political science professors.

“She’s a splendid writer and researcher,” he said. Smith said he sees Bochkova taking advantage of the small class sizes at McDaniel – one of Bochkova’s favorite aspects of McDaniel, compared to her 300-student lectures at Saint-Louis – by making contributions to class conversations.

“She’s inquisitive,” said Smith. He said that Bochkova learns quickly in both his State and Local Government and American Political Institutions courses, putting her among the top of the international students Smith has taught.

In classes like Smith’s, along with several other international relations courses, Bochkova will spend the remainder of the semester studying subjects that keep her on the political science track, preparing for her return to Saint-Louis.

Bochkova admits she is looking forward to going home, but until then, she says she will absorb everything McDaniel offers her.

“You feel wanted to be here,” she said.