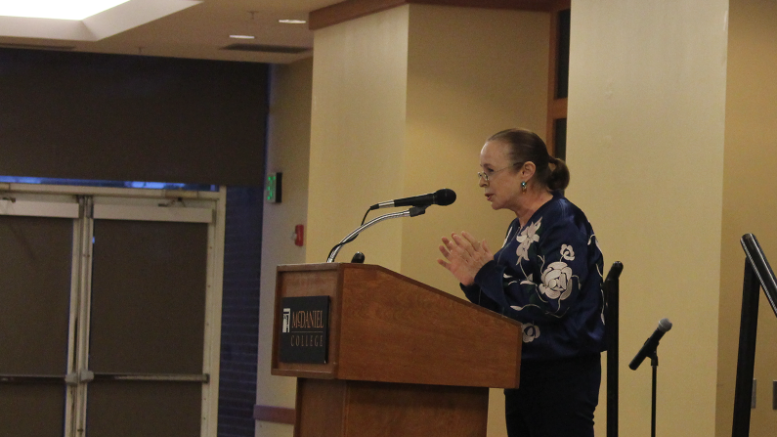 On Thursday, Oct. 11, the Office of Diversity and Inclusion, alongside the Hispano-LatinX Alliance, welcomed the daughter of Fidel Castro to the McDaniel campus. Alina Fernández gave an account of her time in Cuba, her father, and the changes taking place on the island now.

She began by introducing herself, but importantly included her maternal last name, “Revuelta” meaning “revolted” or “rebelled.” Further going into the meaning of “revolution,” she explained it in social sciences as a “moment in history, a transition.” Most “bizarre” for her, however, is that she comes from a country in which the revolution is “endless.” She aimed to use her story as a vehicle for the campus to understand her “Cuban fellows, and an island, the Cuban island, so close to America and at the same time so far away and so distant.”

The military coup by Batista, a Cuban general, threw the country into chaos, she said. Due to the regime’s violent and inhumane tactics, many Cubans created underground opposition groups, one of which was Fidel Castro. Due to such a movement, her mother and Fidel’s relationship began, as she gave Fidel’s movement a safe meeting place and also distributed political manifesto, stored and bought weapons, and created uniforms.

Fernández spoke of her mother’s and Fidel’s developing relationship through love letters while Fidel was in prison. She recalled one morning in which she was watching cartoons, and the channel changed to shouts of “Viva Cuba Libre” meaning “Long Live Free Cuba.” Such chanting came because Batista, the aforementioned dictator, fled the country the night before, and Fidel’s revolution triumphed. However, for many, this is where Fernández’s account becomes highly insightful.

She spoke of Fidel’s charisma throwing the people into a fervor of happiness, however, those same people, once shouting “Viva Cuba Libre“ then began shouting “paredón” meaning “execution wall.” For Fernández and thousands of other Cubans, the previous dictatorship had been changed into a similarly brutal regime. Executions of previous military members became commonplace, and Fernández’s family, aside from her mother and Fidel, had fled the country.

She claimed that the “streets themselves had changed,” and “everything had disappeared.” There was destruction of hotels, parking meters, and other pieces of private property, because they were “symbols of tyranny.” “Even Christmas became something bad, it was a capitalistic celebration,” she claimed.

During such a time, Fidel’s visits to Fernández’s home became commonplace, with her claiming that “he would move from the TV to the living room, just like that. And that became the beginning of the endless revolution in Cuba.”

Fear had become such a customary emotion, that parents worried for the safety of their own children, therefore, many were sent away to families in the United States. With such a statement, Fernández claimed that the “family was the first institution that was destroyed by the revolution.” People were blocked from leaving the country, religion was suppressed, and was later followed by the shutting down of freedom of speech and the press.

As an adolescent, once the country knew that Fernández was Fidel’s daughter, she would be approached by people with their “petitions, problems, and tragedies, hoping that [she] would be the messenger to the man that had absolute power over their lives,” she continued, “those are always the victims, you must be in real desperation to approach a child expecting him to be helpful.” She added that it was “hard to go to school, and there is a line in front of your house, and what is worse is that you can’t do anything to help.”

Because of the Cuban crisis, Fernández tried to avoid her parental ancestry; no matter how hard she tried, though, it was futile. She publicly joined the dissident movement, becoming one of the “gusanos” or “worms” that betrayed the revolution.

She concluded with a short summary of Cuba during the 90’s after the fall of the Soviet Union. Food and water became scarce, life became harder overall, and her daughter could not receive an education, so Fernández “abandoned” her country in 1993. Her daughter followed mere months later.

Fernández returned to Cuba after more than 20 years to take care of her sick mother, only to find a Cuba “with the will to change.” There are changes occurring in the country, small changes, but Fernández is hopeful that such change will lead to a “different way of life and different society, in which freedom will prevail.”