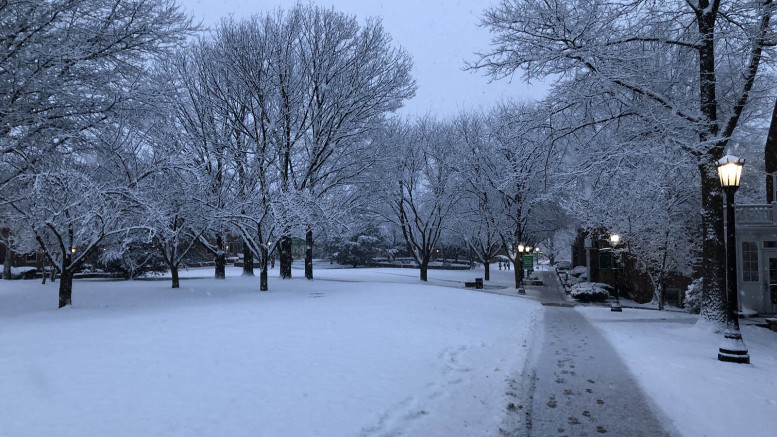 Four of the first five days of the undergraduate spring semester were impacted by a wintry mix of inclement weather, closing the College early on Jan. 29 and Feb. 1 and causing 10 a.m. delayed openings on Jan. 30 and 31. (Atticus Rice / McDaniel Free Press).

Snow began to fall on Tuesday afternoon, prompting officials at the College to cancel all classes that start after 4 p.m. Snowfall for the day totaled about 3 inches, according to the National Weather Service, and was accompanied by below-freezing temperatures and wind. The campus community was notified of the cancelation via email shortly before 3 p.m.; students and faculty received a follow-up email several hours later announcing the closure of campus.

The snow stopped Tuesday night, but inclement weather continued in the following days.

Temperatures dropped even further Wednesday and Thursday, causing icy conditions in the area. Both days, the College delayed its opening until 10 a.m. instead of its normal 8 a.m. Wednesday, a squall blew snow over campus in the middle of the afternoon, and Thursday’s low temperature was 1 degree with a high of only 17 — about 20 degrees below the monthly average high.

On Friday, the College closed at 1:30 p.m., “due to falling temperatures and more snow than expected this afternoon,” according to an email sent to the campus community. Snow fell throughout the afternoon and night, causing a number of clubs and meetings to be canceled. Snowfall was recorded at 2 inches with the day’s average temperature at 14 degrees.

In addition to snow and cold temperatures, portions of Maryland have experienced lower-than-average air quality, meaning there has been a higher concentration of pollutants in the air than normal. Over the weekend, this reached a code orange alert in some areas: code orange is “unhealthy for sensitive groups,” which include the elderly, children, and those with lung and heart conditions, according to AirNow, an EPA program that tracks air quality in the U.S.

The weather service issued an orange air quality alert on Feb. 3 for the Baltimore metro area, including Carroll County, for Feb. 4.

In the coming week, however, experts expect the weather to shift: the weather service predicts high temperatures in the high fifties and rain later in the week, along with improved air quality.