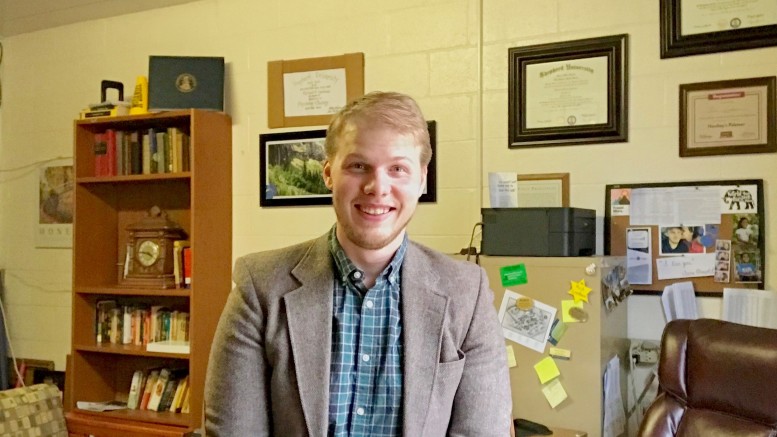 As his second year on the Hill comes to a close, Rich Goodman is transitioning from Residence Life to the CEO where he hopes to continue meaningful conversations with students. (Photo courtesy of Rich Goodman).

Rich Goodman, area coordinator for first year housing within the Office of Residence Life, has joined the Center for Experience and Opportunity as the associate director of career development.

Goodman started work in the CEO in February, but has continued his area coordinator work. He’ll finish out this academic year in the dual role before carrying on with the CEO full time.

His work in the CEO will focus on careers and internships, two of the CEO’s four main components, along with study abroad and service opportunities.

“Anything that you can think of that will help you become more prepared for a job,” said Goodman of what he’ll do for students.

He knows his work will be impactful, as he’s seen some students falsely believe that college automatically turns into a job.

“You have to actually set yourself apart in some way,” he said.

Helping students get internships to set them up for success in the job market is one way that Goodman will help with this in his new role.

He’s excited for upcoming events, like the classic career and internship fairs and alumni panels and events. But he’s also excited for new projects.

“We would love to have more increased demonstration opportunities for various majors and various career paths,” he said. “We would love to see some kind of documentation for each department saying what resources to tap into and what specific things the CEO can do for that department.”

According to Associate Dean of Campus and Community Engagement and Executive Director of the CEO Josh Ambrose, Goodman is the right person for the job.

“Rich has a wealth of higher [education] experiences to draw on for his work at the CEO, including a background in biology, two years in residence life here on the Hill, and much more,” said Ambrose. “He is a skillful listener, an impressive writer, and a wise voice of mentorship for our students.”

Goodman earned a bachelor’s of science in biology and bachelor’s of arts in psychology as an undergraduate at Shepherd University, a public liberal arts college in his home state of West Virginia. He then earned his master’s degrees in college student development and administration and in teaching for secondary science, also at Shepherd.

“I very much like a small liberal arts college,” he said of both Shepherd and McDaniel.

It’s at these small schools that he’s been able to have some of his favorite work-related experiences.

“The best part,” he said of his area coordinator position, “is definitely the relationship that you get to build with your [resident assistants] and your residents.”

For his one-on-ones, regular meetings that area coordinators have with their resident assistants, he makes sure to go out and do something, like get ice cream at Hoffman’s. Being outside of an office setting helps everyone get more comfortable, he said.

“Being vulnerable and being real with people I find is the best way to get to know each other,” he said. “I’ve really enjoyed the conversations I’ve got to have.”

This approach has evidently paid off.

“Rich has become more than a mentor,” said Rachel Pigott, a junior and resident assistant in Rouzer, one of Goodman’s buildings, “he’s become a confidant and friend.”

Luckily his affection for these conversations won’t be wasted in the CEO, as he gets to dive deeper into the advising side of higher education, what he describes as his passion.

“My time is being more intentionally used for the advising part,” said Goodman.

With this time, he’s helping students find their passion and pursue it, not too far from some of his conversations in Residence Life.

“Similar conversations, different roles,” he said of his work at McDaniel.

This different role is also more in line with what Goodman had in mind for his post-master’s work.

He originally wanted a job that would involve leadership, service, and careers.

“I always gravitated toward opportunities to help people grow,” he said.

To boot, area coordinator roles often span a time of two to three years, according to Goodman.

“It’s a common first step for people who are getting into higher [education] after their master’s,” he said.

Even before taking his position with the CEO, Goodman had already collaborated with the experiential-focused office quite a bit.

From helping with the McDaniel Local program last summer to taking on a leadership role with Home on the Hill, the College’s food pantry, to work on other projects, he’s made himself known.

“[Rich] is extremely collaborative, having spent the last few years volunteering for a wide variety of projects on campus and working across divisions in a way that is recognized and appreciated by all–and this is the future of our work not just in the CEO, but for the entire institution,” said Ambrose.

Goodman will have the opportunity for increased involvement with McDaniel Local now that he’s with the CEO, something that both he and Ambrose are excited about.

“Rich has an attention to detail that is appreciated, and an ambition to do well by our students and our institution that is impressive,” Ambrose said. “He will be taking a lead role with employer relationship building in the months ahead, as well as working on individual student meetings and McDaniel Local workshops this summer.”

This role in McDaniel Local will not only give Goodman the chance to connect with more students even earlier, but also allow them to get to better know a lifelong resource, an affect already felt by students.

“[Goodman] encourages all of his staff and coworkers to grow both professionally and personally and his passion for the students is unparalleled,” said Pigott.

And encourage he does.

“I am thankful to have met so many of you so far,” Goodman said, “and I hope that you stop by the CEO to say hi, because I’m going to miss being your [area coordinator]. I have seen so much potential in you all, and there’s a lot more that we can do, so let’s set up a meeting to talk about your future.”

Through the Eyes of a Ukrainian: The Euromaidan