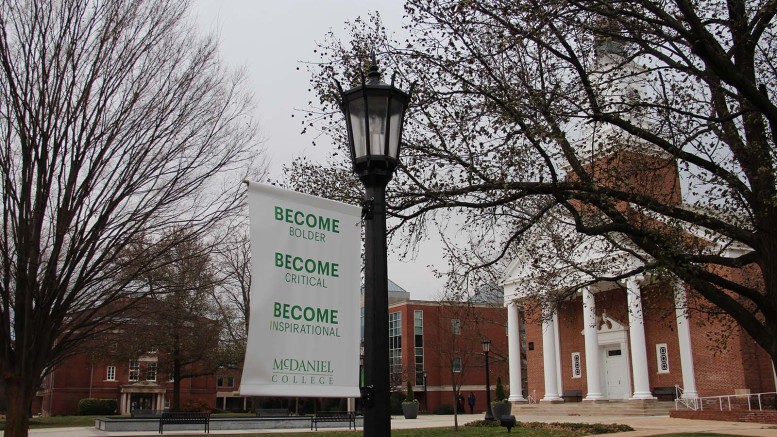 On Wednesday, April 24, Acting Dean of Student Affairs Liz Towle and Associate Dean of Campus and Community Engagement Josh Ambrose held “Ask McDaniel Anything,” an open forum where students are invited to bring their questions about the College to members of the administration.

Wednesday’s forum was the second “Ask McDaniel Anything,” following its introduction in December 2018.

Students who were present included a handful of Progressive Student Union members, several representatives of the SGA, and the author of this article [co-editor-in-chief of the Free Press].

The ninety-minute discussion addressed the Department of Campus Safety’s procedures regarding trespassers and protesters, issues surrounding sexual assault and Title IX, and transparency in decision-making at the College’s administrative level.

The College’s Department of Campus Safety, when notified of a trespasser on school grounds, sends officers to search for the individual in question and take appropriate action against them if and when found, according to Towle. If officers are not able to identify the trespasser, that person is charged with trespassing later if there is sufficient evidence they were on campus.

The Department of Campus Safety maintains a trespass list with names and photos of individuals not allowed on campus, which is updated weekly. RAs have this list, too, and were recently given access to the photos along with names.

Members of PSU brought forward their concerns about the potential for being threatened with arrest during a protest, with PSU President SG raising the question of Campus Safety’s procedures regarding protests on campus. In February, the student organization held a protest outside the Board of Trustees meeting to challenge the decision to suspend several of the College’s majors.

“The intention of the College is not to pave the way to arrest students,” said Towle.

Ambrose said he is open to discussing policy concerning freedom of expression with students starting in the fall 2019 semester to protect the College’s First Principles while simultaneously guarding against hate speech and other harmful rhetoric.

“Early next semester, students will be invited to a special meeting to discuss expanding the language in the student handbook addressing our community’s values around the freedom of expression,” he said in a later email.

He said students should have the ability to protest on campus.

“The hope is that students or whomever can protest and have the right to do that and all the other operations of the College can still happen as necessary,” Ambrose said at the forum.

Multiple students brought forward concerns about sexual assault policy at the College, and about a lack of student knowledge surrounding how to report sexual assault. The College will introduce a new bystander training called Step UP! in the fall of 2019, according to Towle.

Step UP! training will replace the Green Dot bystander program that the College currently uses. Step UP! is a “comprehensive bystander intervention program” developed by the University of Arizona. Unlike Green Dot, students will be able to be trained, not just faculty.

The College will begin using Step UP! during Fall 2019 Orientation after staff have been trained in the program over the summer and student leaders in August when they return to campus.

At McDaniel, the Consent and Sexual Education student group, along with peer mentors and RAs, will be trained in bystander intervention “so that we can get that word out and expand that training for student facilitators,” Towle said. Step UP! is also less costly than Green Dot.

The College’s sexual misconduct policy will also be reviewed over the summer, according to Towle. The Department of Education will soon propose changes to Title IX expectations at colleges and universities.

“We’ll have [summer] to make any changes we need to, based on what’s been proposed by the Department of Education,” said Towle.

Over a three-year period, the College spent $500,000 on its most recent branding and marketing campaign, according to Ambrose. The campaign was developed with the marketing firm Ologie.

The College’s administration plans to implement new platforms for facilitating more student involvement in decision-making at the College, according to Towle and Ambrose.

The deans said their goal is to hold “Ask McDaniel Anything” twice a semester. In addition, the President, Provost, and other administrators will attend one of these meetings per year at the least.

Also, a representative group of 10 to 15 students — selected carefully to represent various facets of student groups — will meet with the President’s Council, which consists of President Casey and four vice presidents of the College, ideally once per semester. During these meetings, Ambrose said, students will be updated about new campus initiatives. The President’s Council will also hear feedback from students about “topics relevant to the student experience,” he said.

G suggested that the two undergraduate student visitors to the Board of Trustees meetings, which take place twice a year, be elected by the student body. Currently, one of the students is chosen based on factors that the College deems representative of multiple facets of student life and the other is the SGA president.

Towle said she was open to this, but that the elections of visiting students to the meetings would probably not be an immediate change.

“Let’s work on getting that group of students together…and let’s get them communicating with the President’s Council, and let’s go from there,” she said.

Further, the identities of the student visitors are not kept confidential.

“There’s no reason for people to not know who they are,” Towle said.

Students who are interested in seeing the College’s bylaws are encouraged to contact Marissa Cormier in the President’s Office for a copy. As of May 13, these are undergoing some revision.

Correction, May 20: The quote “so that we can get that word out and expand that training for student facilitators,” was originally incorrectly attributed to Ambrose and is now attributed to Towle.