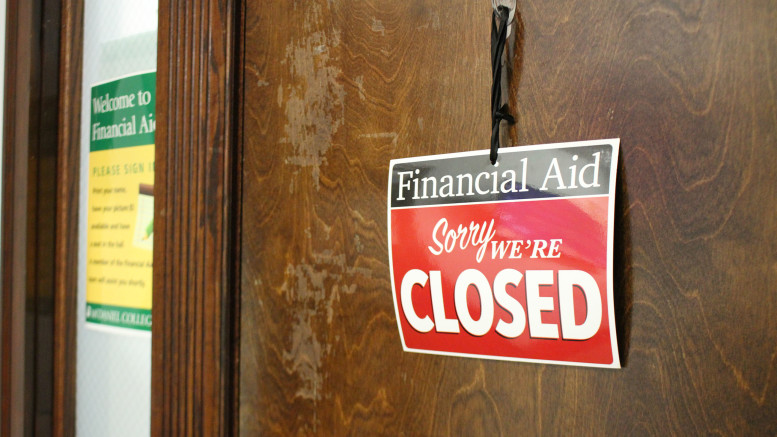 The Financial Aid Office in Elderdice Hall is now closed to walk-in traffic from 8:30 a.m. to 11 a.m. for staff to focus on processing student documents. (Marya Kuratova / McDaniel Free Press).

In response to the recent article about the situation in the Financial Aid Office, I’d like to write about my experience. It was a cold and rainy November morning the day I was in a car accident. I was on the way to McDaniel, less than a mile away. I was sideswiped just in front of the local gas station. What followed the accident was an onslaught of health problems that nobody would have been able to predict—from pneumonia to undiagnosed whiplash that lead to a lifelong battle with migraines.

After the accident, McDaniel College was wonderful and supportive about allowing me to take my classes at my own pace, due to my health battles and the lawsuit. Little did I know that the acceptance of taking things at the pace necessary for me would not be acceptable for the Financial Aid Office. My grades dropped after my accident and it became in my best interest to withdraw for a short period of time due to financial problems. I returned to McDaniel with a bit of a twisted schedule—I reapplied for the spring semester, with permission to pause the writing in psychology major while I took capstone. The plan was then to finish my senior year this fall by taking the necessary remaining course to graduate. The spring semester went beautifully, and I was able to maintain a 4.0 for the semester.

My first visit to the Financial Aid Office, I was greeted by kind faces and words of encouragement. When the office realized that they had no ability to help, I was quickly shuffled to the bottom of the list of priorities, leaving me in a vulnerable position. When I reached out to the Office of Academic Affairs, Dean Breslin did everything in her power to find a solution by attempting to reach out to Financial Aid, but she as well was promised that the office would be in contact with me about other options and I never heard from them again. I attended the fall semester for one week. I had to give up a part-time campus job that I had had for years, an independent study opportunity, and a teaching assistant position. I was only three months away from finally completing my undergraduate degree. I had high hopes to be able to move right along into the graduate program at McDaniel to work towards my goal of becoming a professor (perhaps at McDaniel, but that dream seems to be long crushed).

After all that I have gone through, and how long it has taken me to graduate thus far, McDaniel’s Financial Aid Office has a twisted sense of view on what is acceptable and what is not. It is not agreeable to take an extra year despite the fact I was in a car accident on the way to McDaniel. They will not give any additional aid if it takes you an extra year to graduate—the why doesn’t matter. McDaniel was always a welcoming second home for me and I absolutely love the professors I have grown close with over the years. But to be so close to my degree and be turned down from aid, for circumstances completely out of my control, has broken my heart.