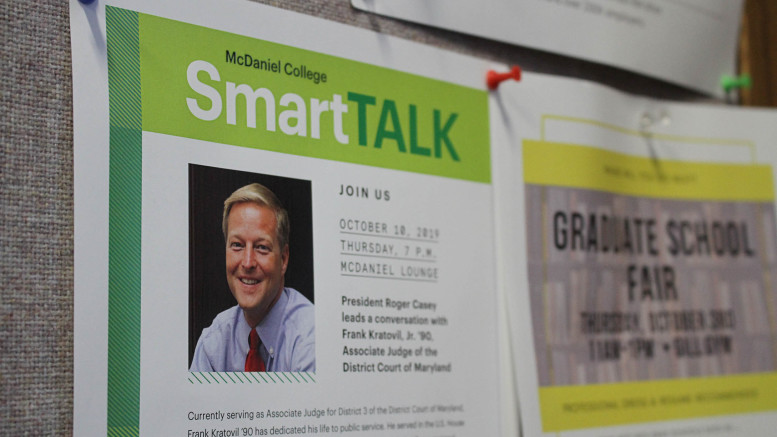 A flyer in Hill Hall encourages the campus community to attend the SmartTALK on Oct. 10 in McDaniel Lounge. (Marya Kuratova / McDaniel Free Press).

On Oct. 10, McDaniel alumnus Frank Kratovil, Jr., a member of the class of 1990, returned to McDaniel as the guest for the first SmartTALK of the academic year.

Kratovil currently serves as the associate judge of district three of the District Court of Maryland.

Kratovil graduated from then Western Maryland College with a degree in political science and international studies, and received the Bates Prize as the outstanding graduating male, as well as the Charles W. Havens Award, “awarded to a senior who participated in intercollegiate athletics and has shown by word and deeds the attributes of charity, altruism, benevolence, and a humane and compassionate concern for his fellow man.”

As an undergraduate, Kratovil was the president of several organizations, including the Omicron Delta Kappa national leadership society, the Trumpeters Leadership Honor Society, the Inter-Greek Council, and Phi Delta Theta fraternity.

The son of a Prince George’s County district court judge, his academic pursuits took him to the University of Baltimore School of Law, where he earned his juris doctorate and graduated with honors in 1994. And in 2003, Kratovil became one of the youngest state’s attorneys in Maryland when he was elected state’s attorney for Queen Anne’s County at the age of 34.

He went on to represent Maryland’s first congressional district in the U.S. House of Representatives from 2009-2011, where he played an active role in the agricultural committee, the armed services committee, and the natural resources committee.

In a 15-minute address, Kratovil spoke of his appreciation for McDaniel’s liberal arts core and how it instilled in him a love for law, service, and social justice. Despite all of his career and academic achievements, Kratovil said he did not have the same work ethic when he first arrived at McDaniel.

“I didn’t really know what I wanted to do and had no real driving ambition to learn and take advantage of the knowledge that was readily available to me through my professors,” Kratovil said. “When I got here my freshman year, I was more interested in having fun, playing sports, and simply doing what was necessary to get by academically.”

Kratovil said it was not until a confrontation with Robert Weber, Ph.D., the chair of the political science department at the time, who threatened to drop him from a class, did he begin to take his studies more seriously.

“As a professor myself and as a parent, I now find it very funny, and many years later, I’ve recognized that that moment was clearly one of the turning points of my educational career,” Kratovil said.

He soon thereafter dedicated himself to the material in classes like political thought, international law, world politics, and state and local politics.

“Once I recognized how interesting those classes could be, I stopped looking to simply get by,” Kratovil said. “I sought out those professors that I thought would be the most challenging and interesting.”

He listed his favorite class as a course taught by the late Ira G. Zepp, which Kratovil says “focused on racism, sexism, and other –isms, and challenged all the students to consider their own biases and prejudices.”

The rest of the event was a 45-minute long Q and A session led by President Roger Casey that touched on a number of topics, including notable moments from Kratovil’s tenure in Congress and his opinions on various events in American politics today.

Towards the end of the SmartTALK, Kratovil encouraged any students interested in running for political office.

“Every revolution, every massive change for progress and good starts with young people,” he said. “If we have any hope of solving the issues we are facing, whether it’s guns or political polarization, [it] starts with the young folks.”