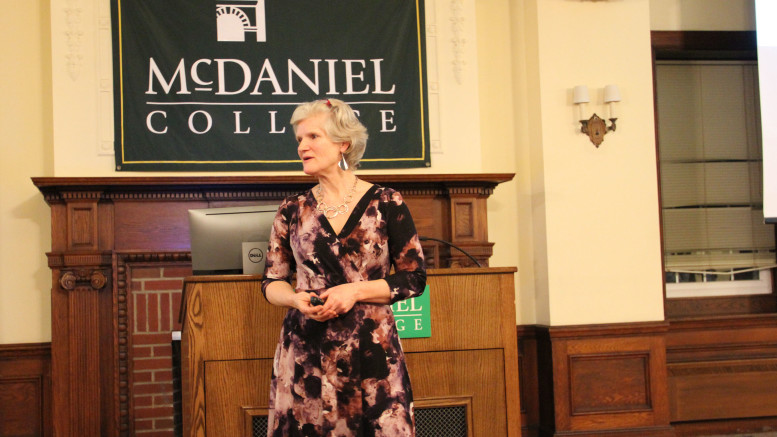 “Politics is at home. Danger is ever present for journalists,” she emphasized.

This year, the Global Issues Colloquium was titled, “Journalism Under Fire: Grappling with Challenges and Opportunities.” The Feb. 12 lecture began with an introduction from Amy McNichols, Ph.D., director of the Global Fellows program.

“The Global Issues Colloquium strives to talk about global issues that don’t have easy solutions,” said McNichols. She described the Colloquium as a scholarly lecture with interactive components, and an integral part of the Global Fellows program.

Shalal considers problems regarding journalism “one of the crucial topics of our time,” and although her work on a daily basis covering topics such as global trade and economics does not require a bullet proof vest, it is the reality for some of her coworkers.

Shalal began her presentation by projecting the First Amendment on the screen.

“This is the only profession that is constitutionally protected. The forefathers knew that this could cause controversy in the future,” she said.

She went on to describe how journalism has changed over the decades.

“We decided when something was true or important. Because of the changing media landscape, we’ve lost our gate keeper function,” Shalal said.

In the internet era, there is little time for fact checking; it’s all about who can break the story first. The internet also allows for more emerging threats, including artificial intelligence, deep fakes, and overall disinformation and manipulation.

“The level of trust for journalists is very low,” she added.

Shalal listed some of the struggles that journalists face today including a loss in credibility, mental health problems and emerging studies regarding PTSD in journalists, and low wages.

She described the struggles of working in a political climate that often attacks the media. She mentioned Mary Louise Kelly, an NPR anchor, and Jeff Mason, a coworker at Reuters, who were both recently involved in tense exchanges with President Trump or members of his cabinet. Shalal described the duty of journalists to hold the government accountable.

“There has always been tension with government. We are the fourth estate…another section of checks and balances,” she said.

Shalal also described the more dangerous aspects of journalism. She brought up Jamal Khashoggi, who was killed in October of 2018 by Saudi officials.

“It’s not just far away; it’s at home too,” she said before bringing up the mass shooting at the Capital Gazette in June of 2019. Five journalists were shot and killed at the daily newspaper in Annapolis, Md.

“No matter where it is, it’s always close to home, and it sends ripples through the entire journalistic community,” she said.

According to the 2019 World Press Freedom Index, the United States ranks #48 out of 180 countries, behind Romania and Chile. 30 percent of female journalists face harassment, particularly online.

“[There has] never before been so many death threats, especially for women,” Shalal said.

Although the future seems bleak and sometimes dangerous, Shalal likes to remain optimistic. She mentioned an increase in demand for news, especially unbiased news, and a slow increase in diversity in the media.

“For the longest time, news was created for white people, by white people,” she explained. “Now, there are more niche outlets focused on minority experience. Not only can they share stories amongst themselves, but with others, too.”

Shalal closed the lecture by offering tips for how everyone can improve their media literacy skills and protect the first Amendment, including supporting reputable media sites and organizations that stand up for journalists. She suggested reading multiple articles from various different viewpoints to confound the algorithm.

“It’s rare that people hear viewpoints from the other side. When people actually read the newspaper, they read both sides in the editorials,” she said.

However, Shalal’s biggest piece of advice is simple: vote.

“Vote! Vote for people who honor our First Amendment and our Constitution,” she said.

Shalal’s lecture was followed by a Q&A.

My Design expands in second year, looks toward future