The McDaniel and Westminster communities are uniting for rallies outside the Westminster Branch Library. Photo by Kyle Parks.

The McDaniel and Westminster communities have recently come together in a series of rallies against the Trump Administration, and its various policy choices, executive orders, and cabinet nominations. These rallies, held outside of the Westminster Branch Public Library, have attracted a number of students and faculty, along with residents of Westminster.

Students and faculty were first informed of the rallies through Dr. Henry Reiff, who sent out emails and campus announcements regarding the rallies staring Feb. 9, hoping to get students and faculty out to the rally that upcoming weekend. Reiff also shared information about the demonstration with Jose Moreno, director of ODMA, to distribute to activist groups on campus.

“We have organized an ongoing rally because of many concerns about the Trump administration’s actions on immigration (Ban and Wall), choice, climate change, silencing the opposition, and so on,” stated Reiff in his campus announcement, “As educators, we deplore the choice of [Betsy] DeVoss as Education Secretary. We condemn the uncivil, authoritarian and autocratic behavior of the POTUS.”

The demonstrations, were organized with the help of local liberal activists in the Carroll Community Action Network (Carroll CAN), who worked with Reiff to set up the demonstrations. 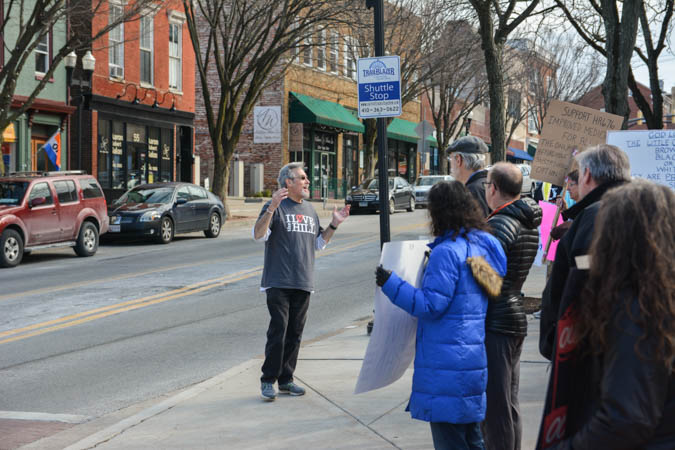 Dr. Henry Reiff talks to the crowd at the Feb. 11 rally. Photo by Kyle Parks.

“I was trying to find what I would say were like-minded people, and as we talked about this and it evolved,” said Reiff, “we decided we wanted not to make our basic message things that we are unhappy about or don’t agree with but rather try to put it in a positive message.”

From this planning evolved the idea for a recurring demonstration, occurring every Saturday at 1 p.m. The first demonstration on Feb. 5, Reiff says, was small and had little to no student or faculty involvement. It hovered in the range of 20 to 25 people in attendance.

After the announcement, however, and further publicity in Westminster, those numbers increased. By the rally on Feb. 11, there were around 50 people outside the library demonstrating, including a number of students and faculty members. On Feb. 18, the rally had grown to 80 people, around 10 of whom were students.

Despite the generally conservative nature of Westminster, the demonstrations seemed to have had a positive reception among residents.

“During the demonstration the people who passed by in cars, even walking by, were overwhelmingly positive. There are people honking, thumbs up, and so on,” said Reiff. “We got a couple of [middle] fingers. But I’d say a rally like that would not be effective if we didn’t get at least a few fingers”

Other participants shared their similar support for the demonstrations, along with personal reasons for coming out to join. Dr. Thomas Deveny came with a sign that read “Climate Change is No Hoax,” showing opposition to both the Trump administrations statements about Climate Change, and his nominee for head of the EPA, Scott Pruitt. 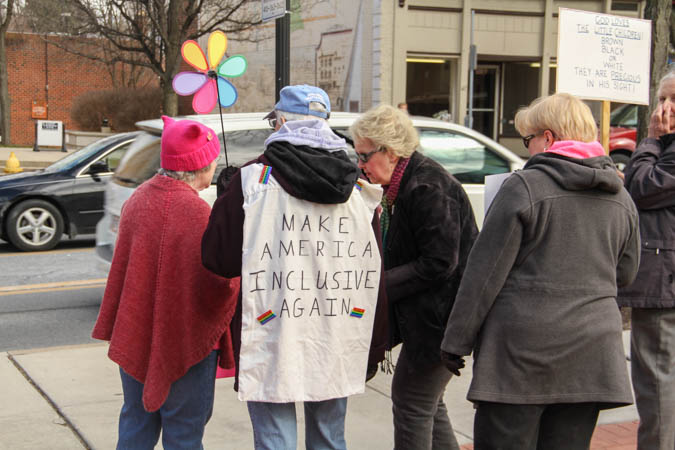 Protestors held signs and banners against the Trump Administration. Photo by Atticus Rice.

“I hope that by holding the sign at the rally on Saturday, or by keeping climate change posters (which I got at a demonstration in DC a couple of years ago) on my office door and in my office window, it will help raise consciousness on this issue,” said Deveny.

Likewise, students at the rally expressed support, and stated that they were demonstrating to support their classmates who were under attack by the Trump administration’s actions.

“I’ve been struggling with wanting to do something, with wanting my voice to be heard, with the recent events that have been happening,” said student Antoinette Martin. “The Muslim ban was something that really, really struck a deep chord in me just because my best friend is a Muslim and I couldn’t imagine her not being allowed to be in this country”

As for if similar demonstrations would occur on campus, Reiff was hopeful that the student body would step up.

“I would love to see stuff here on campus, I’d love to see it be student initiated,” said Reiff, “there has not been a lot of overt expression of concern on campus, but just below that I think there are a lot of people who are involved and who are working together, at least I think I hear that from individuals and from professors, and I do know that there are students and possibly faculty and staff who feel very threatened.”

Kyle Parks and Atticus Rice contributed to this article.