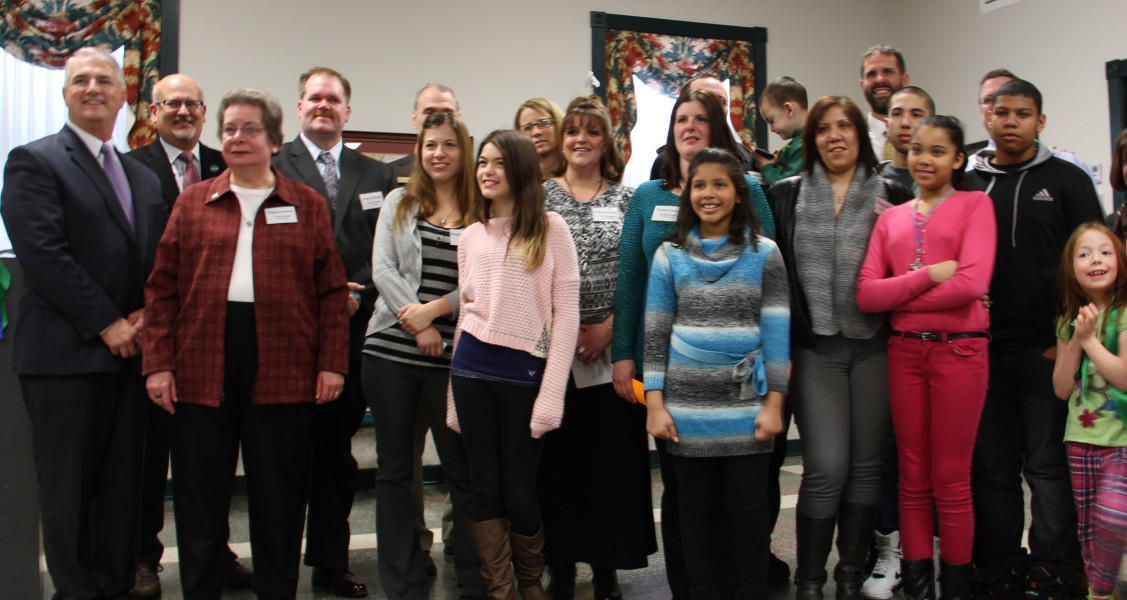 Habitat for Humanity of Carroll County hosted a dedication ceremony on Tuesday for the completion of new homes in Westminster.

Habitat for Humanity of Carroll County (HHCC) and the City of Westminster held a ceremony Tuesday morning to celebrate the finished construction of five homes at Union Crossing.

Habitat for Humanity of Carroll County provides affordable homes for eligible families in need with the help of local businesses and volunteers. The non-profit’s mission statement – “to build homes, communities, and hope” – was highlighted in the ceremony, along with many organizations and individuals who were recognized for their donations and support.

McDaniel College was one of the organizations recognized for their assistance to the HHCC project. President Roger Casey extended an invitation to the recipients of the Union Crossing homes, which are located just down the hill behind Whiteford Hall.

“There are no fences on the Hill,” said Casey, encouraging the families to take part in our open community events on campus. “Our home is your home.” 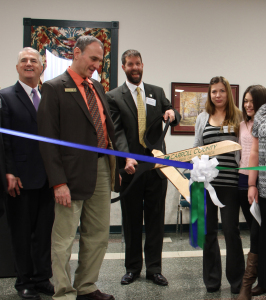 Habitat for Humanity of Carroll County’s Executive Director Bryan Lyburn cuts the ceremonial ribbon to mark opening of the Union Crossing homes, with support from Mayor Kevin Utz, County Commissioner Dennis Frazier, and one of the partner families, Sarah O’Neill and her daughter.

Among the individuals thanked in Executive Director of HHCC Bryan Lyburn’s speech was McDaniel Professor of Social Work, Dr. Jim Kunz. Dr. Kunz was noted for being instrumental in bringing student volunteers to help build the homes.

Dr. Kunz described this as “a collaborative effort” between students, faculty, alumni, and trustees who lent support to the project. He personally led one of his classes to help build, but knew of many students who went on their own. Additionally, several of McDaniel’s campus organizations such as fraternities, sororities, sports teams, and even faculty donated time. “It’s not an exaggeration to say there were hundreds” of volunteers from McDaniel alone, he said.

There were 205 days of work on the construction of the Union Crossing houses contributed by McDaniel students, and 53 days contributed by staff, according to HHCC Volunteer Coordinator Brenda Laverdiere,

“These numbers were significant in Carroll County Habitat completing this project. Thank you isn’t anywhere near enough!,” she said.

The President’s Office supplied each family with gift baskets containing school supplies for the families’ children and McDaniel provided parking on campus for volunteers throughout the construction process.

Westminster City Mayor Kevin Utz and County Commissioner Dennis Frazier commented on the HHCC’s partnership with the city, which provided financial support to the affordable housing project through grants and waiving construction fees. Commissioner Frazier commended the HHCC’s ability to allow these families the opportunity to “pull themselves up by their own bootstraps.”

An HHCC requirement for home-recipients is for the family members to be as involved in the building of the home as possible. Families are responsible for completing 250 hours of work, building the houses, as well as attending a homeownership education program and repaying the mortgage at a 0% interest rate, according to Lyburn.

The families were present at the dedication ceremony and expressed their gratitude for the program’s assistance and the community’s help.

Sarah O’Neill, who will be living in one of the homes with her daughter, stated that it was the best thing that has ever happened to her. She had been living in her parents’ basement for four years, searching for an affordable place before she submitted an application with HHCC and was selected.

Crystal Caltrider represented her family as she thanked the city and all the McDaniel students who volunteered.

The Habitat for Humanity of Carroll County will be holding an event on Thursday, Feb. 19 at Legends Café in the Town Mall from 12 p.m. to 9 p.m. Legends Café will be donating 15% of their profits during this time to HHCC.

Vice President of Finance and Administration Steps down after 20 Years

McDaniel and the Restaurants of Westminster