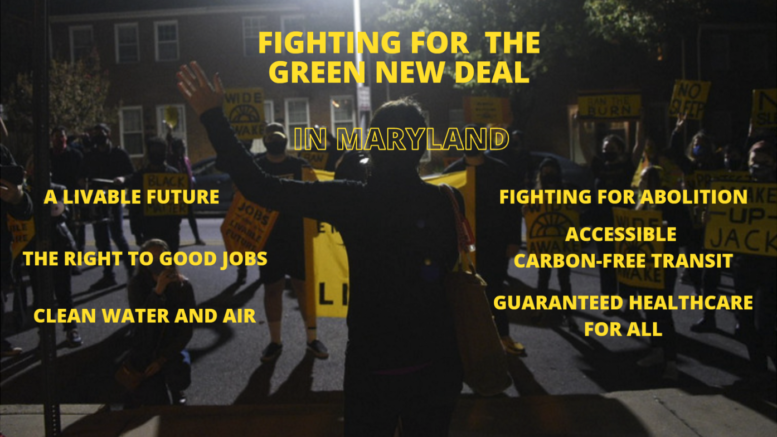 Fighting for a brighter future, Sunrise Movement McDaniel has come together with Sunrise Movement hubs across Maryland to endorse an array of Green New Deal aligned bills they believe will take steps to make Maryland the state people need it to be.

The Sunrise Movement is a youth movement taking charge across the country to create a future where everyone has access to good jobs, clean water and air, and a livable future. In the collective pursuit, they are inspired by the Green New Deal – a bold vision to create millions of jobs while addressing the climate crisis.

In the midst of a pandemic, climate crisis, and massive exposure of systemic injustices, the movement tackles more than just issues of the environment. They seek to holistically tackle and change the inextricably woven system of economics, social conditions, and environmental realities. The Sunrise Movement Maryland coalition has assembled to pass bold and transformative legislation in Maryland by supporting a host of bills in the 2021 state legislative session.

In the bills they have endorsed, they strive to capture state-level legislation that responds to economic injustices and opportunities, healthcare accessibility, issues of transit, waste management, police reform, and prison abolition.

The agenda is broadly grouped into bills that make strides towards a livable future, fight for abolition, pursue the right to good jobs, establish clean and accessible transit, secure clean air and water, and seek healthcare for all.

The endorsements result from the consensus of Maryland hubs currently active in the coalition. Hubs are Sunrise Movement groups that respond to national issues as well as ones focused locally. The bill package is informed by those hubs and endorsed collectively by the Sunrise Maryland coalition. The bills are also endorsed by the hubs as individual entities to reflect the support of their local area as well.

Together, the hubs and the coalition are supporting the endorsed bills by sharing information, reaching out to legislators, providing testimony, taking and creating actions, and supporting the work of partners who have spearheaded the bills. They have partnered with grassroots left-wing climate groups and social justice movements to grow their power and talk to communities.

The coalition and connected hubs have identified an opportunity for Maryland to lead our nation as we head into the decade of the Green New Deal. The legislation endorsed takes steps to pursue solutions and infiltrate the structures that enable harmful and negligent waste practices and create new ones that advocate and respond to the needs of Marylanders.

The Sunrise Movement hub at McDaniel College is one of the 10 hubs that have signed on to this legislative agenda. They will be taking actions passed down from coalition leadership and creating specific ones to uplift the issues of biggest interest to the members and the Carroll County community.

A newly formed student organization as of last semester, they have already taken action nationally and on campus. Leading up to the 2020 presidential election, members of Sunrise McDaniel wrote postcards to swing-state voters, phone-banked across the country, and participated in voter protection actions. During the McDaniel College presidential selection process, they worked with faculty groups and student organizations to represent community interests by circulating a letter template with anti-racism demands for selection consideration and creating a sign-on letter demonstrating the desire for climate action, inclusion efforts, and transparency in the selection process.

In this new endeavor, they are aiming to involve McDaniel College students in the nuanced endeavor of advocacy work at the state level. Members will have the opportunity to lobby, attend hearings, provide testimony, engage in communications work and more through Sunrise connections to sister hubs and partner advocacy groups across the state and nationally.

Students attending McDaniel College who are interested in uplifting the legislative agenda, educating about the Green New Deal, and representing community interests can come to an orientation meeting on Teams Thursday, February 18 at 7 p.m. The link is available on their Instagram @SunriseMcDaniel or can be provided by emailing sunrisemcdaniel@gmail.com. To add your name to the fight for a Green New Deal in Maryland you can sign on individually at bit.ly/3tLbvhV.