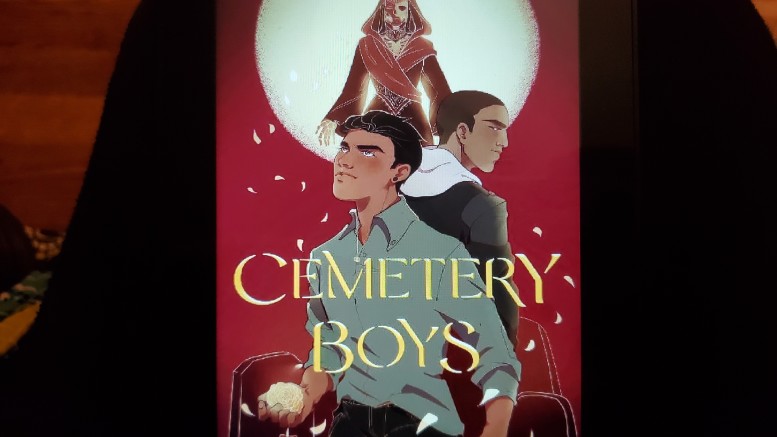 Aiden Thomas’s debut novel, “Cemetery Boys,” follows 16-year-old Yadriel, a transgender Latinx guy trying to prove to his traditional family that he’s ready and able to take on the role of a brujo.

The brujx of Yadreil’s family was gifted with magic by the Lady of the Dead. Yadriel wants nothing more to take part in the traditions of the brujo, who are able to summon spirits and, when necessary, help them move on from Earth by severing them by the tethers that keep their spirits here. However, it’s an incredibly gendered system and not all of Yadriel’s family has accepted him as male.

To prove that he is able to join the brujo, he and his cousin Maritza undergo the necessary ritual for Yadriel to do so behind their family’s back. However, during the ritual, Yadriel and Maritza feel a sharp pain that signals that a member of their family has died, in this case, painfully. Their cousin, Miguel, is gone and his tether is missing as well. Without knowing where his body and tether are, they are unable to find out what happened to him.

Meanwhile, Yadriel sees this as his chance to test out his new powers as a brujo and seek out his missing cousin to sever his connecton to his tether so he can return for Dia de los Muertos. However, the tether he finds doesn’t belong to Miguel but a boy from his school named Julian who doesn’t want to pass on until he knows his friends are okay.

Yadriel, Maritza, and Julian must work together to solve the mystery of their cousin’s disappearance and Julian’s death so Yadriel can prove to his family once and for all that he’s who he’s meant to be and so Julian can pass on. However, what happens when Yadriel and Julian find themselves being pulled closer together?

This story had all my favorite elements: magic, LGBT+ main characters, and an adorable romance that in no way felt forced. I also loved all the colorful imagery and the descriptions of the festival for the Day of the Dead. Without giving too much away, this book also made me very emotional. It was so easy to get swept up in the action, and I couldn’t put it down.

The story also handled a number of difficult topics like the actualities of living as a trans person and a Latinx person in the current political climate. However, these are not so much made out to be plot points as they are framed as an ongoing everyday part of the characters’ realities. It was handled sensitively and was incorporated well into the novel.

If I had any criticisms, they were driven from my mind by the tsunami of emotions that came with the last few chapters. Any faults were overshadowed by the pure impact it had on me and the way that it drew me in until the very last page. I’ve already gone back and reread several of my favorite passages and I would undoubtedly read it again, which is the biggest sign of how much I enjoyed a book. It also seemed like a good fit for our October issue given the timing.

My favorite quote has to be “‘You ready?’ Julian asked, a curious look on his devastatingly handsome face. ‘No,’ Yadriel confessed, his voice tight. Julian grinned. ‘Do it anyways.'”

This book was published on September 1, 2020 through Swoon Reads and can be purchased here. You can also visit Aiden’s page here to learn more about the author, see some artwork for the novel, or learn about their upcoming novel, “Lost in the Never Woods”.

Letter to the Editor: Financial Aid Office SNAFU forced me to drop out

Gender-neutral housing: Where does McDaniel stand?