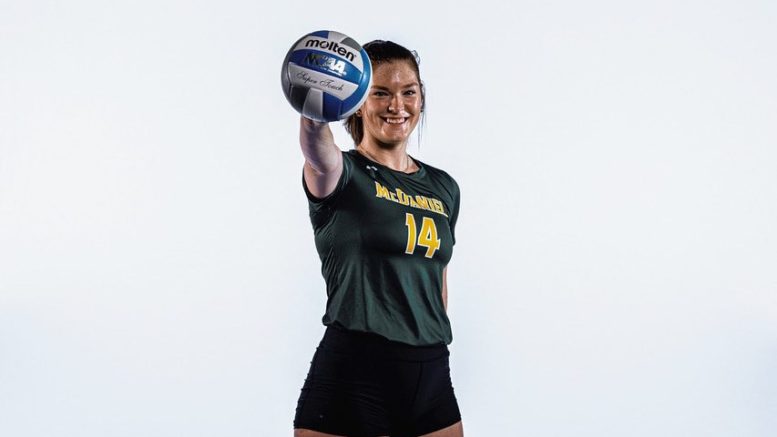 Under the lights of Franklin and Marshall’s gymnasium, 21-year-old senior from Ellicott City Anna Jezerski leaps into the air, her torso clearing the top of the net. Her right arm whips forward, making contact with the sweetest part of the volleyball. It flies across the net and slaps the hardwood floor with a hearty thud. A whistle blows— point, McDaniel College. The sideline erupts in cheers.

After her own celebration on the court, Jezerski’s smile fades slightly. She clutches for her right shoulder, masking a grimace of pain as best she can. Physically, something is very wrong.

Despite these concerns, Jezerski persisted, finishing out the last game of the season before discovering she had torn her labrum— the cartilage that lines the ball and socket joint of the shoulder. In fact, she had been playing through the majority of the season with the tear. Practicing what she preaches and going all-in are two driving forces in Jezerski’s career with Green Terror Volleyball Team, affectionately referred to as “GTVB” by members of the program.

Despite her best efforts to mask her pain, staff and players took notice of her struggles. Assistant Coach Laurainne “Loo” Ojo-Ohikuare noted that even the deepest pains were no match for the “highly self-motivated” Jezerski.

“She was still ready and willing to do anything and everything. At the end of practice, she was more vulnerable and pained but it didn’t change her want to compete,” Ohikuare said.

Ohikuare also felt a great deal of admiration for Jezerski’s perseverance on and off the court. In particular, she noted her adaptation to the usual volleyball offense with varying shots and aggressive attacks, or hits.

“Loads of respect for that kid. Not a lot of people would put their bodies on the line or figure out a way to adjust to her injury,” Ohikuare said.

Sitting beside each other in the Pub— the popular food destination at McDaniel College— Jezerski opened up about her life as a volleyball player, and what motivated her to play through such an injury.

Just after a post-season meeting with GTVB, Jezerski’s manner was relaxed and open, no longer clutching her shoulder after great bouts of physical exertion. In regards to her reasoning to continue playing, Jezerski found it to be the obvious answer.

“Quite honestly, I didn’t want to step off the court,” Jezerski said. “Just knowing the impact that I had playing-wise, knowing that I was the kill leader in every game and that I was one of the strongest competitors in the conference, I just didn’t wanna step off of the court. And of course, I knew I could give to the team in other ways, but I just knew how big my role was going all the way around.”

As a four-year player on McDaniel’s volleyball team, Jezerski is no stranger to injuries of any kind. But this one, according to her, felt different.

“I knew I hurt my shoulder in our first conference match…  just after the Haverford [College] game. We were warming up against Stevens [Institute of Technology], and immediately I was like ‘My shoulder hurts. So. Bad.’ And I just pushed through, I was like ‘Whatever, it’s fine, it’s just one game,’ but as the season progressed it just continuously got worse and worse, especially in the [Franklin and Marshall] game, our very last game,” Jezerski said.

But for the eight years of both high school and college volleyball that she’s been playing, Jezerski has been surrounded by competitive athletes. In fact, some serve as her biggest inspirations. Class of 2020-2021 graduate Emma Lorenzen, a Middle Blocker, took Jezesrki under her wing from the moment they met.

“She was such a huge support system for me, but she also was such a baller and so competitive and so fierce on the court that I really looked up to her and she was just kinda the volleyball player that I wanted to become, of like: never giving up, never letting anything stop you, and just trying to be the best you can be every single time you step on the court,” Jezerski emphasized.

Only after finishing her senior season was Jezerski interested in receiving an MRI— a magnetic resonance imaging scan that would determine the gravity of her injuries. Here, she discovered that she not only had a torn labrum, but tendonitis bursitis, and a cyst which she believes to be from a previous tear. Her initial reactions were ultimately a multitude of emotions.

“Obviously, I didn’t want the season to end but… definitely a sigh of relief of one, I know what’s going on, two, I definitely was upset, cause I was like ‘Damn…’ I still want to keep playing volleyball. But I think my biggest overall arching thing was you know what, thank god the season’s over, I can deal with my pain now,” Jezerski concluded.

Despite her time with Green Terror Volleyball coming to a close, Jezerski knows her love for the program will always remain with her.

“I just love GTVB, and it’s so cheesy but like I always hear alums say like ‘Oh, McDaniel is such a big part of you,’ and you’re like ‘Oh yeah yeah, whatever, McDaniel, sucks here, love it,’ but like as much as I hate to admit it McDaniel will always be a part of me, especially GTVB.

Her biggest advice for incoming recruits, not only at McDaniel Volleyball but Division III college as a whole, is to go all-in.

“Take coming in serious. Take your lifts serious. Listen to your seniors, listen to your coaches, listen to your upperclassmen, and just take what they say to heart… Give one-hundred percent, one-hundred percent of the time… It ends so fast, and you never wanna go back and be like ‘Oh, I wish I played harder my freshman year, I wish I played harder my sophomore year,’ you don’t wanna just say that you worked hard your senior year. You wanna be a three-year starter, a four-year starter, three-time Centennial conference, you want to earn those recognitions and know that you’re giving your best one-hundred percent of the time.”

Jezerski has received the honor of Centennial Conference’s All-Conference First Team for her efforts during the 2021 season.