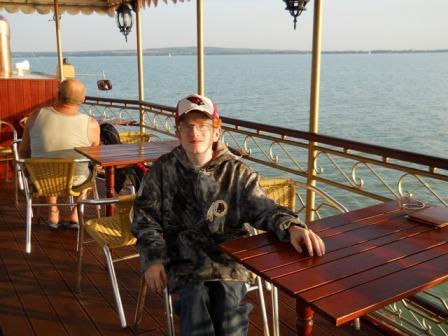 Gregory Nolen on a boat out on Lake Balaton in Hungary.

Getting up early and racing to catch trains and buses to get to school. Sounds like I’m a kid in New York City, right? No, I’m actually in Budapest, Hungary, with ten other McDaniel students studying abroad for the Fall 2011 Semester.

How did I get to be here? I first visited in January, when I went on the 2011 January Term trip here with the SASS office. I liked it, and after much thought, decided to spend a semester here. I had originally hoped to study abroad with my brother, who is at a different college but had been approved to study abroad in Ireland. However, those plans fell through, as he had to withdraw from his program. Though I felt sad for him, I decided to continue with my plans to study abroad.

After months of packing and summer vacation, it was time for me to leave the United States. I was scheduled to fly out on August 27, 2011; however, it looked as if those plans might change as Hurricane Irene tore up the East Coast. Remarkably, I was able to fly out on time, and arrived in Budapest the next day. Other students had their flights cancelled by Irene and got in later.

The first few days were a whirlwind of orientation, and rescheduling of activities in the wake of other students having not arrived due to Irene. Moving into the apartment was a fun challenge. Of all the apartments, mine had the door that would not open, so I ended up waiting outside for an hour with my roommate, Giorgi Pashalishvili, while the real estate company tried (and failed) to get the door open. Eventually, they just kicked in the door, and ended up breaking a lock.

After we all got here and moved in, classes began and the routine of a normal college semester has started to kick in again. Recently, I went with the group to Lake Balaton, a popular vacation spot nicknamed the “Hungarian Sea.”

While I have been enjoying my semester so far, I miss my friends back at McDaniel terribly and am awaiting my return to campus in January.

President Casey is positive about widespread changes this year