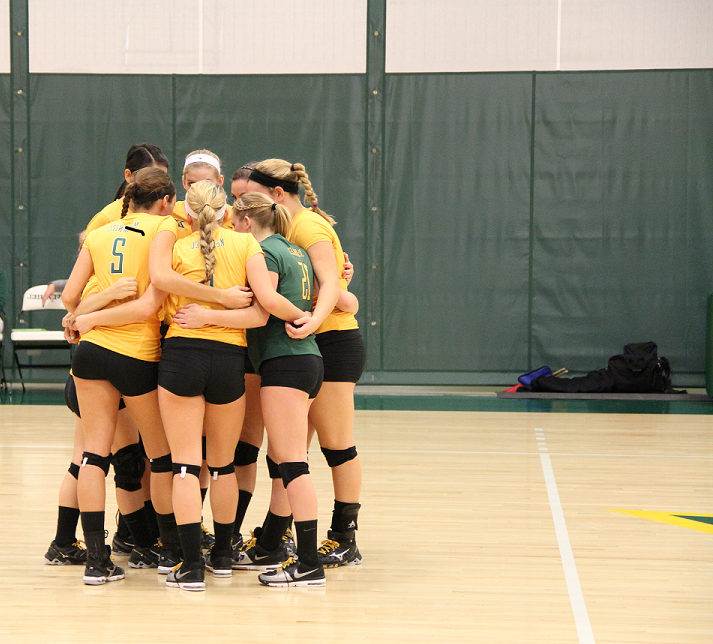 As I entered the gymnasium, the music blaring, I watched as both teams warmed up and I prepared myself for an intense game. For someone’s first time at a volleyball game, or really of any sport in general other than the Homecoming football game, this was a little intimidating. They both looked concentrated, they both looked ready, and the general feeling was one of “we’re not here to mess around.” I could feel the excitement, and the build-up, as both teams prepared.

As the game began, I wasn’t as focused; it was just another game to me.  It was nothing big or fancy, just something that I had to cover and then finish up with. But as the points were won, or the serve changed sides, I felt the anxiety build: this was one of my school’s teams and I wanted them to win. I was sitting on the edge of my seat twenty minutes into the game, riveted by the actions on the court. I focused and made sure to keep track of things as well as I could considering my limited knowledge of volleyball or all things sports-related in general.

Sophomore Kloe Martin led the Green Terror on attack with 12 kills, and freshman Genna Weger carried the defense with 13 digs.

On the opposing side, Julie Harvey led the Diplomats (F&M) with 11 kills. F&M remains the only undefeated team in the Division III conference.

The two Centennial Conference schools battled valiantly against one another, and I sat engrossed, thoroughly impressed as I watched these women jump up to the net to block, to spike, to score, and to come back down to the earth only to jump up and do it all over again.

While McDaniel played boldly, Franklin & Marshall jumped out to a 5-1 lead in the final set and near the end had a lead of 20-12. Later in the game, however, Madeline Rose shrunk the gap with her kill that put the score at 23-20, but the Diplomat’s took two of the final three points and closed the set at 25-21, securing the win for Franklin & Marshall.

As everyone present to support the Terror’s walked out (everyone’s spirits a little creased, wrinkled and worse for wear), Head Couch Jessica Cortese spoke about how the game had gone.

“I think it went really well,” Cortese said. “Certainly at the end of the day we like to win and even though it didn’t turn out quite like we hoped, we battled really hard.”

One could tell that she was pleased with her team as she added, “they’re a young team, I ask that they play hard every time and they do.

Sophomore Amy Kolence also had positive comments about the game.

“We communicated well but I feel we missed crucial points that we should have gotten,” Kolence said. “That changed the energy of the game.”

Kolence, although extremely proud of her team, said that they should “be harder on offense.”

As I wrapped up with my questions, the team was walking out of Gill Gym and I realized how impressive these ladies were, working hard and staying focused throughout the game; even in losing, they had a confident air of grace about them, one that was not lost on the McDaniel crowd that had been cheering them on.

As someone who had never previously been to any serious athletic event (again, other than Homecoming), this was wonderful. By the end of the game, I was hooked – I didn’t want my team to lose. I finally understood how people could enjoy sports: if you know enough about the game to know who’s doing what, you become truly invested in its outcome. When my team lost, I was dejected, but I have little fear about the team’s ability to do well at other events.

I walked out of the gym with my quotes recorded, a number of the points scored in my notebook, and new outlook on the world of sports. I had thoroughly enjoyed my time there and the game itself; the adrenaline pumping through my system even as I sat doing nothing was exhilarating. It is certainly something I’ll be doing again and something I suggest everyone should try.

Come on out and support the Women’s Volleyball team in their next home game on Thursday, Oct. 17 against Haverford College at 7 p.m.