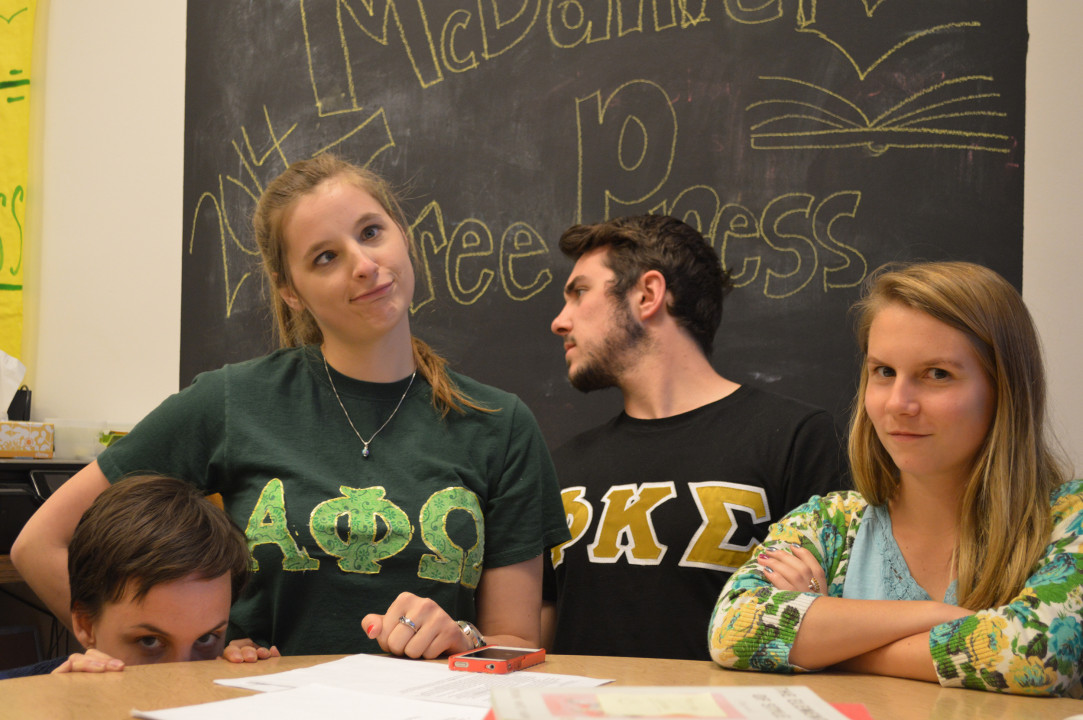 With graduation around the corner, seniors across campus are finishing up capstone projects and other coursework and preparing for what’s next in their lives. The graduating editors of the Free Press are no exception to this. All four of them have exciting plans for their futures, and in the midst of wrapping up their studies, they’ve still managed to find the time to make valuable contributions to the Free Press—which has, in turn, contributed richly to their experiences at McDaniel.

Editor-in-Chief Lauren Murray, an English major with minors in Spanish, writing and new media journalism, says that working with the Free Press has been really fun.

“Revitalizing the program and getting the staff excited about reporting news has been so fun and rewarding,” Murray says of the Free Press this school year.

“I am so thankful for everyone who helped and everyone that had a great attitude about making this publication known and respected on campus,” she says.

Murray’s time at McDaniel has given her the experience she needed to land a job before graduating. After graduation, she is moving to Oklahoma, where she will be a Regional Site Coordinator for Reading Partners, an AmeriCorps affiliate. She will be responsible for visiting different schools to help Site Coordinators run their programs and assess student achievement.

News Editor Amber Slater will also head west after graduation. In the fall, she’ll begin her MA in Rhetoric, Writing and Discourse at DePaul University in Chicago, where she will be a graduate assistant at DePaul’s University Center for Writing-Based Learning.

Slater, an English and Spanish major with a minor in writing, has been the News Editor of the Free Press for three years.

“I have really enjoyed working with writers and seeing them grow,” Slater says of her time as an editor, who herself has favored news and features writing. She added that her favorite memory of working with the Free Press was the interview she conducted with Bobby Seale last semester.

Commentary Editor Ben Shoudy, a Spanish and communication major with a minor in Latin American studies said that his time with the Free Press has helped him become more aware of what’s happening on campus.

“Being a part of the Free Press has made me have to have more of an eye for things going on around campus and a way to judge them objectively. This could be anything from large-scale events on campus to smaller, more cultural things about campus life. Either way, I can’t just form a quick opinion on something and judge it, and I definitely think the Free Press has a lot to do with that,” says Shoudy.

“It also just feels really good to involved in a lot of really different organizations,” added Shoudy, citing Greek life and sports groups as the sorts of organizations he’s been involved with in addition to the Free Press during his time at McDaniel.

After graduation, Shoudy is moving to Italy, where he says he’ll make goat cheese on a farm for the summer and then teach English as a second language.

Web Editor Meghan Schatz, a double major in Communication and Cinema, hopes to put the skills she learned at McDaniel to good use when she graduates. Schatz says, “After graduation, I hope to get a job in the film industry. I’ve applied for a job as an editor for a program created by Maryland Public Television, where I formerly interned. I haven’t heard back yet, but here’s to hoping I hear soon!” She added that after a year or so, she’d like to go to grad school to study film production and perhaps go to grad school for communication as well.

Schatz has been a member of the Free Press since her first year at McDaniel and joined the paper after submitted a piece she wrote for her Intro to Communication: Media class. Since then, she has been both a copy editor and the Web Editor of the Free Press, which she cites as her favorite organization that she’s been a part of on campus.

Says Schatz of the Free Press’s weekly meetings, “It’s the one meeting a week I actually look forward to going to. To see the other editors, gossip about on-campus news, and scheme new ways of making our paper more kick-ass has been super fun.”

While the senior editors of the Free Press may be leaving McDaniel to pursue a variety of wonderful opportunities, they leave behind advice that they hope current and future McDaniel students will take into account.

Slater encourages writers in particular “to write the stories that they really believe in and expose important issues to the larger campus community.”

Murray, meanwhile, encourages students to use their time on campus to get involved.

Murray says, “For anyone not graduating yet, I urge you to join some clubs and participate in activities. It will make your college experience rewarding and you will meet some great people who like to better the community and have fun!”

Who Can Say What? A lecture about who can speak for others