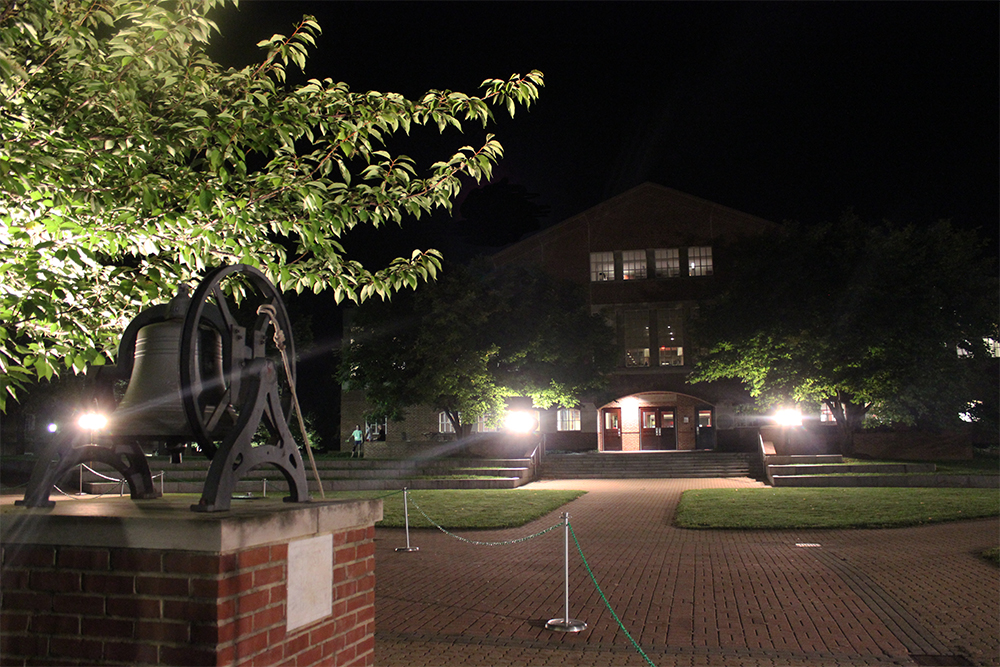 Surrounded by floodlights, Red Square was aglow on the first evening of New Student Orientation. Students of McDaniel’s First Year Team began to line up outside of Old Main Bell and the main entrance to the upper level of Decker College Center in anticipation of students from the class of 2018, all of whom had not gotten a chance to “ring in” yet.

Dr. Roger Casey emerged from Baker Memorial Chapel and toward the bell. Grinning, he said that this was the first time students have ever rung in at night.

Soon, the class of 2018 emerged as well, having just finished their candlelit walk through the McDaniel College Arch and into the chapel to light candles of their own.

All donning white McDaniel College class of 2018 t-shirts, each of the more than 400 new first year students had the opportunity to ring the bell. After ringing in, each student ran into Decker College Center to go to Glar for an ice cream social. Their path into Ensor Lounge was flanked with RAs and peer mentors, who clapped and cheered for and high-fived the students throughout the ceremony.

A longtime McDaniel tradition, all first year students have an opportunity to “ring in” their time at McDaniel College in the afternoon of their first day on the Hill, immediately after convocation. However, due to rain, this year’s ringing in ceremony was postponed to after the “Out of the Darkness, into the Light” candle walk, a more recent tradition started by the college in 2011.

Students who had the opportunity to watch the bell ringing seemed to like the experience.

“I enjoyed it a lot!” said senior Sol Camanzo, an RA. “I felt proud to be a part of the ceremony and welcoming the class of 2018!”

Given the success of the nighttime bell ringing ceremony, it’s possible that future classes of McDaniel students will also get to ring in at night.

According to Casey, “Though inclement weather led to having the ceremony after the candlelight service, and we had never discussed such a possible move, I have to say that I found the ceremony even more meaningful following the candlelight event because it was far more personal, having just new students there being cheered on by upperclass students. I also liked the ambiance better, and pragmatically, it’s a lot cooler to ring a bell for half an hour at night than in the 87 degree afternoon. I, for one, would support shifting it [to at night].”

Regardless of what time of day future ringing in ceremonies will take place, in all likelihood, many class of 2018 students will be able ring the bell in the afternoon in May 2018, when they “ring out” on their graduation day.