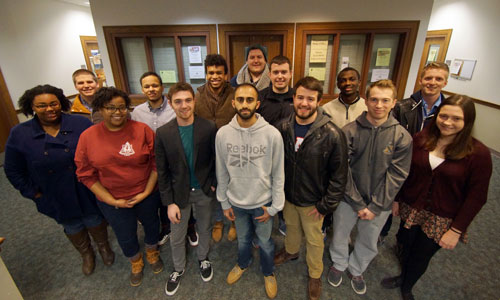 A group of Political Science and International Studies students made their way to Boston for the Model U.N. simulation. Image courtesy of: McDaniel College

Most students would probably be excited about missing half a week of class due to snow. Yet, after seven days of being stuck in an odd-smelling, increasingly cramped hotel room in Boston, I was looking forward to nothing more than being back. By Tuesday, Feb. 17, I, along with 14 other McDaniel students, had been in Boston for over a week. At first we had been participating in the 2015 Harvard Model United Nations simulation; later in our trip, we were stranded student survivors of a super-sized snowstorm. Our flight back to Maryland was scheduled for a Sunday; Mother Nature had decided to drop more than eight inches on Boston the day before. We wouldn’t be sleeping in the comfort of our own beds until early Wednesday morning.

Money quickly ran out. Boston is by no means a cheap city. (Think $4-for-a-piece-of-toast expensive.) I’m speaking from experience here (avoid the sports bars). I watched, hopelessly, as the savings in my bank account were cut clearly in half over the span of my stay. The wi-fi in the hotel was limited, so limited that many of us couldn’t access or complete our school assignments. And streaming Netflix during those long, boring days in the hotel? Don’t even think about it. Laundry was out of the question, for the hotel wasn’t providing laundry services, and there was no way we could make a seven-block trek to the nearest laundromat in blizzard conditions. Perhaps junior Bilal Ali, a student on the trip, best summed up not only the laundry, but also the entire experience, when he told a reporter for the Boston Globe: “it stinks.”

However, saying this might have made us seem like entitled twerps. That’s how some Boston residents felt about our story, which they made clear in the Boston Globe article’s comments section. To be fair, our struggle was, in the grand scheme of things, a minimal affair. Boston residents have been suffering through relentless snow for over a month. We’re lucky here in Maryland that three inches of snow constitute a freak-out response. Yet, for those of us in Boston, our struggle was real enough. Nobody expects to be stuck in a hotel room past their expected date of departure. Nobody wants to deal with a lack of money, inability to access homework, distance from friends and family, smelly clothes, or the cabin fever (hotel fever?) that eventually settles in.

Of course, in some ways, being snowed in at Boston was a blessing in disguise. It gave us the opportunity to explore an incredible city, an opportunity we would have missed otherwise. It provided us the time to connect with students from all over the globe, to make foreign connections, and to learn a little bit more about the world in which we live. Most importantly to me, it gave us the chance to get closer with each other, to develop stronger friendships, and to laugh by blowing the significance of an inconvenient delay wildly out of proportion. Perhaps Bilal was right in that the being snowed in “stinks.” But, Bilal, I wouldn’t have traded it for anything.