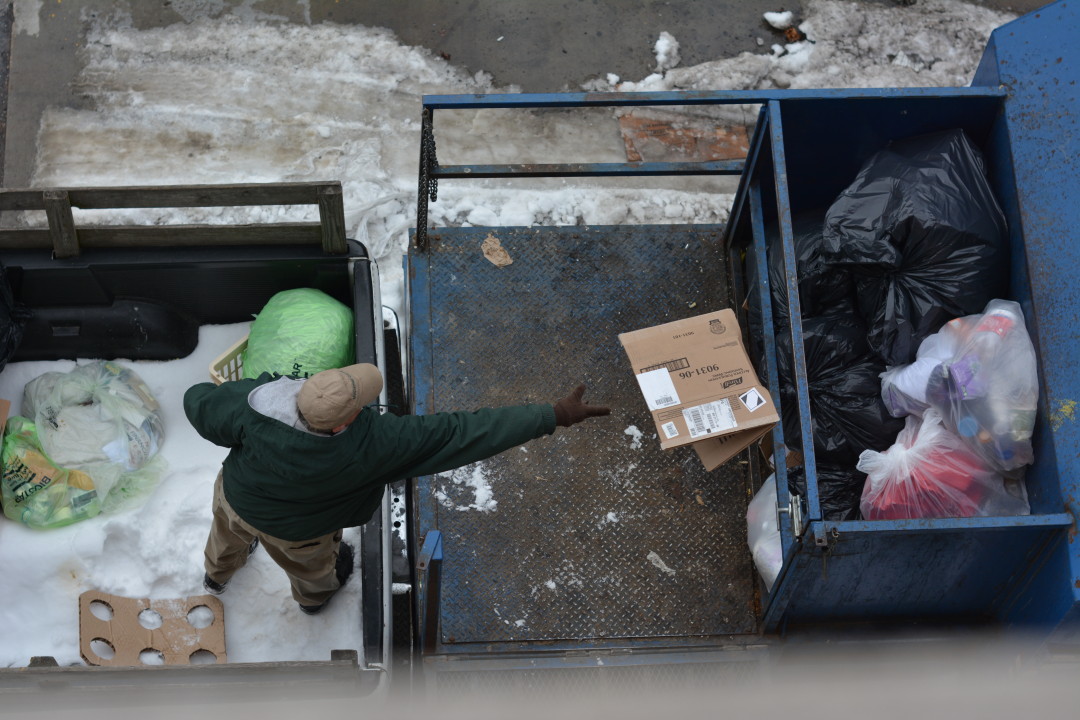 Is McDaniel recycling? There is quite a bit of evidence that suggests that the answer is a resounding “no.”

McDaniel, like many other institutions in the United States, has begun to recycle more, but there is still a lot of progress to be made.

In the last few years on the Hill, vast improvements to recycling habits have been made. According to Dr. Mona Becker, an environmental studies professor, there used to be only boxes labeled as recycling in offices, not actual recycling bins and “most people just took [their recycling] home with them.”

Due to recent development by Green Life, a campus organization affiliated with the environmental studies department, there is now an abundance of recycling bins around campus. According to Alan Snyder, a co-founder of the organization, there are now 270 recycling containers on campus.

Snyder also says that McDaniel is learning from examples set by other institutions. For example, data from the physical plants of The Johns Hopkins University and Gettysburg College are being used to help McDaniel improve its recycling output. 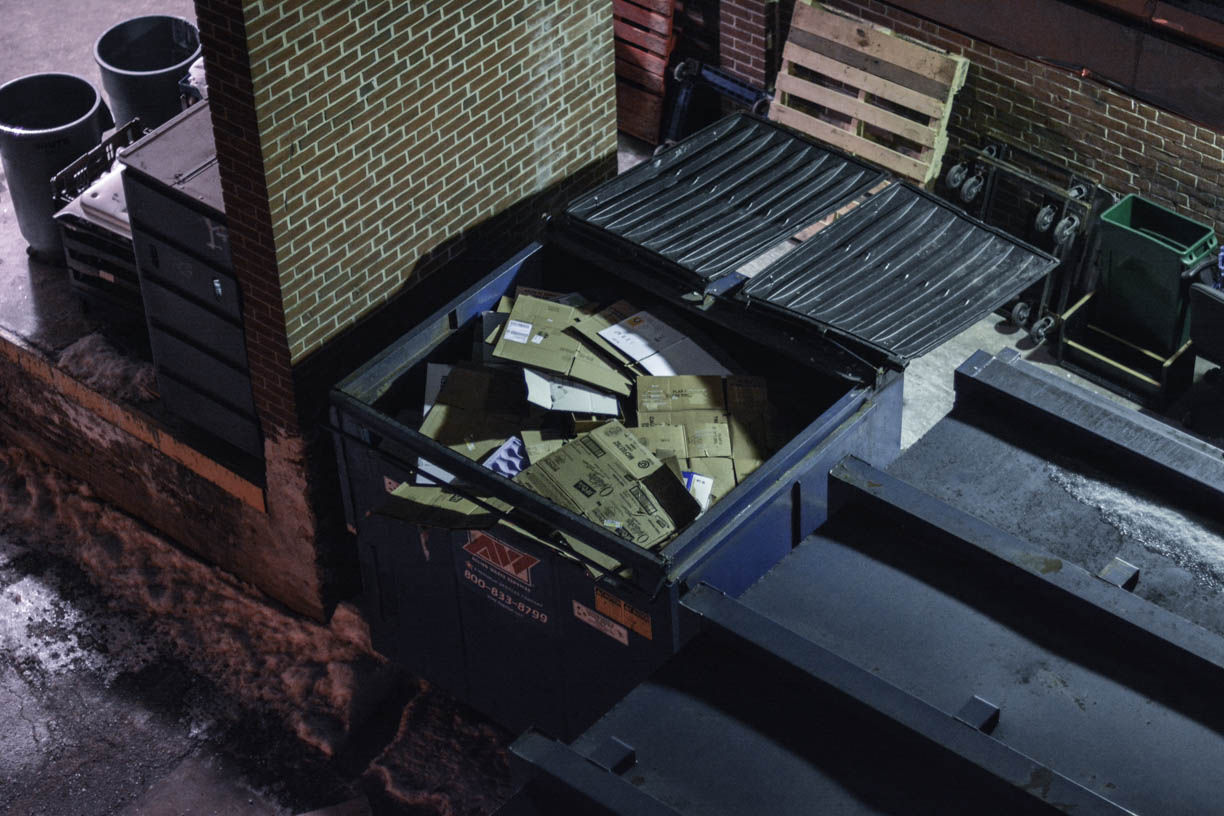 Becker has noticed an overall increase in recycling since she arrived at McDaniel in 2010, saying that “we didn’t even have recycling bins outside until last summer.” Becker added that the increased presence of bins has led to a rise in recycling by students.

There are, however, some problems that are hindering McDaniel’s efforts to go green.

A major problem is behavior: students and staff do not always recycle when they can. Becker gave examples of common situations in which recyclables are unlikely to be recycled: “If there aren’t enough recycling bins that are obvious, people will throw garbage in the first receptacle they see” and “in instances where recycling isn’t clearly labeled, people will not recycle.”

Additionally, Snyder states that “the recycling yield isn’t reaching [Green Life’s] expectation of 100 percent” and that people’s behavior is a factor that needs to be considered.

One potential reason for this behavior could have to do with a lack of confidence that recyclables end up anywhere different than garbage. A lot of people are critical about housekeeping’s effectiveness. “If you come across a recycling bin that only has two Coke cans in it, it’s tempting, I think, for the housekeeping staff to just throw those two Coke cans in the trash,” says Becker, who, along with several students, claims to have seen this in action.

Becker adds, “If we reach a tipping point where the students are filling up the recycling containers as much as possible, it will actually start to get recycled better.” 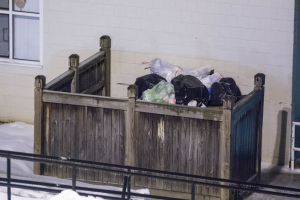 At the same time, Snyder is very impressed with the custodial staff’s efforts to adhere to the new policies of recycling and feels that they deserve recognition for their aid in the process.

Many McDaniel students remain pessimistic about McDaniel’s recycling efforts, and are therefore generally less likely to make an effort to assist. An informal survey reveals student attitudes towards recycling:

40 McDaniel students were asked a series of questions about their opinions as well as habits in regards to recycling at McDaniel. The data collected are converted into the following graphs: 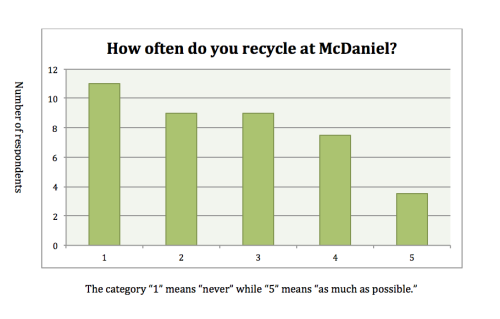 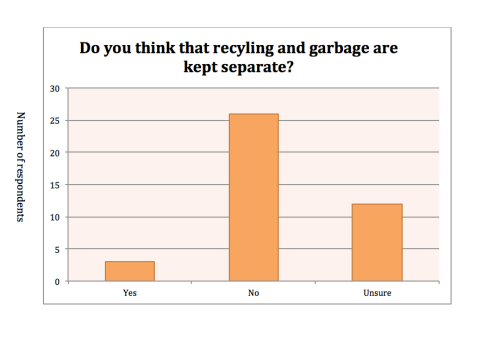 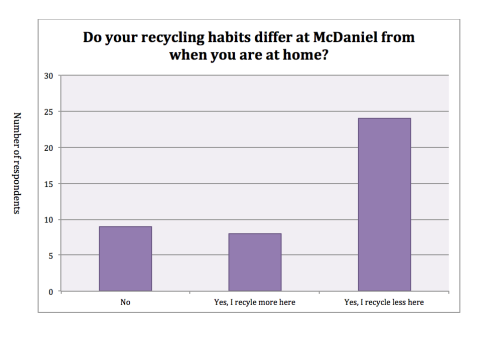 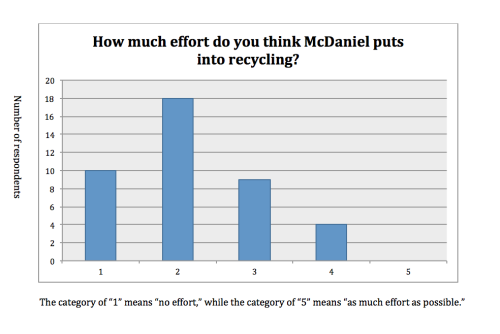 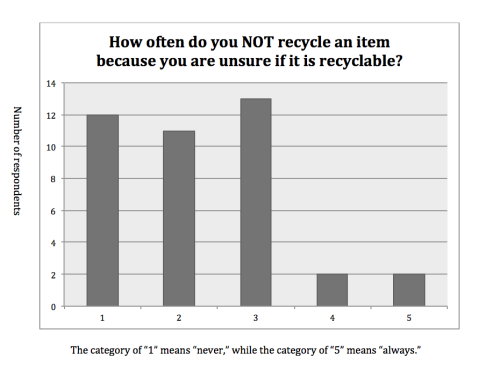 McDaniel students are not particularly confident in the institution and are generally not doing much recycling themselves. When asked about the handling of recyclables, a housekeeper stated that recycling bags are simply taken outside, where someone else takes them. A majority of the time, they are then taken to a dumpster specifically for recyclables, but there are also instances of green recycling bags and cardboard recyclables being seen thrown into dumpsters along with black trash bags.

According to  Marty Weeks, Director of Housekeeping, the recycling bags are taken to a separate dumpster, where they sit until being transported to recycling plants. There are, however, some problems with this since recycling containers on campus are at times treated as garbage cans. This creates a larger problem because public services will not accept bags for recycling with non-recyclable items mixed in.

Weeks notes, “recycling has really picked up in the last year” and “students are doing a much better job.”

As for suggestions on how to increase recycling, both environmental studies professors agree that education is a big factor. Becker states, “education and better enforcement” are the best ways. According to environmental studies professor Dr. Jason Scullion, “it’s about education and signage. Students need to be informed about why recycling is worth the effort.”

According to the EPA, Americans discard 28 million bottles and jars and 25 trillion Styrofoam cups yearly. Additionally, a 2012 Municipal Waste Report by the EPA states that 251 million tons of waste were produced in America in 2012, but only 34 percent of non-durable goods (products used for less than three years) and 18 percent of durable goods (used for more than three years) were recycled.

Scullion says that the point of recycling “is to make the campus more sustainable so that we can be a part of the solution to making the world a better place.”

With Title IX Changes Being Implemented, Students Have Doubts about Relationship Violence Numbers