Relief print exhibit at the first floor of Hill Hall

Changes accompany every new semester, and students that have walked through the first floor of Hill Hall might have noticed that the once bare walls of the lounge are now covered in large black and white pieces of art.

The pieces are relief prints, which according to Steven Pearson, Associate Professor in the Art Department, require students to have an understanding of relief, how to use value to get the composition, and how to create an emotive piece.

“Relief prints are much more expressive and open to simpler compositions,” says Pearson. 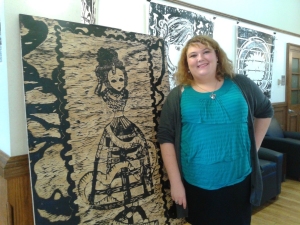 Maggie Heller posing with her woodblock

Pearson chose one woodblock to include with the exhibition of the prints: Maggie Heller’s.

“It shows a more expressive use of the carving into the wood. She didn’t clean it all up to make it purely white, she left the wood raised in areas. And it’s skinnier than the others, so it wouldn’t take as much space in the lounge,” says Pearson.

Heller’s piece, which she calls “Francequas”, was inspired by pre-revolution French fashion.

“My art deals a lot with body image and how fashion implemented changes, and the French liked to highlight what they didn’t like, with beauty marks, corseting, so I did something along that line with measurement and size,” says Heller.

Although not part of the printmaking class, which has a Preceptual Drawing or Design prerequisite, Heller joined the woodblock print for one of her Advanced Studio projects as a challenge.

Her favorite part was “lifting up that board and seeing that the print actually worked.” 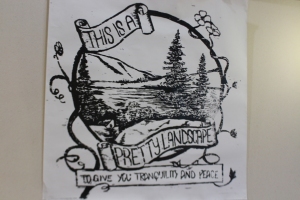 “It was beautiful,” she says. “Now that I did it once, I want to keep going with it.” Heller, a double major in Cinema and Art, plans to take printmaking in the spring.

Another one of Pearson’s favorite prints is Nicole Ringel’s, which depicts a landscape bordered by the words “This is a pretty landscape to give you tranquility and peace.”

“It’s snarky,” says Pearson. “It seems to work as a parody of propaganda. It is making sure we know exactly what to think about such an innocuous image.”

“I wanted it to be kind of ironic,” says Ringel, “but also thought provoking, because it’s true but also poking fun at itself.”

Pearson, Heller, and Ringel all agreed on two other works deserving of attention: Steph Perez’s “Yet, I am Not Alone” and Michelle Tangires’s “My Future Unfolding.”

“Steph Perez is a machine,” says Ringel. “I think she uses black and white so dynamically and activates the whole space.” 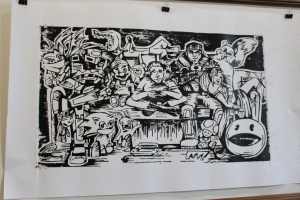 Steph Perez’s “Yet, I am Not Alone”

Of Tangire’s work, he says, “She could be referencing the way education is opening up the world to her, so as a professor we always like to hear that something we’re doing is working with the students.”

Heller said that she enjoyed watching Tangires carve out each of the individual letters.

The students could decide to make their woodblocks using an electric dremel, hand tools, or a combination of both. Ringel is one student that chose to use only hand tools, and she is also one of the reasons artists in the printmaking class are much more adamant about safety goggles.

Around one o’clock in the morning, “I was carving this woodblock using my hand tool, and a piece of wood chipped off and hit me in the eye,” Ringel says.

She didn’t think much of it, but ended up going to the hospital that night and seeing an eye specialist in the morning. Luckily, she didn’t have to wear an eye patch.

“I kept on getting jokes about how I was going to be the nurse from Kill Bill,” says Ringel. 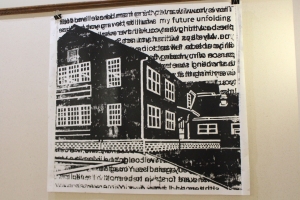 Although relief prints have always been part of the printmaking class, they have only been creating the large woodblock prints for two years. Before that, they did small linoleum prints.

“One of the reasons I switched from small linoleum prints to this project is the printing process creates a sense of teamwork, collaboration and community,” says Pearson. “They have to work together to get these all printed in one day, and because we rent a steamroller they have to have them done on that day.”

“It lets them see one of the projects we do and lets them get involved,” says Pearson. “Dr. Marx from the physics department has volunteered both years to be the steamroller driver, and why wouldn’t you volunteer for that? It’s fun.”

Masterworks Chorale Takes a Turn Back In Time

Headlines Around the World: What’s Going on Outside of McDaniel