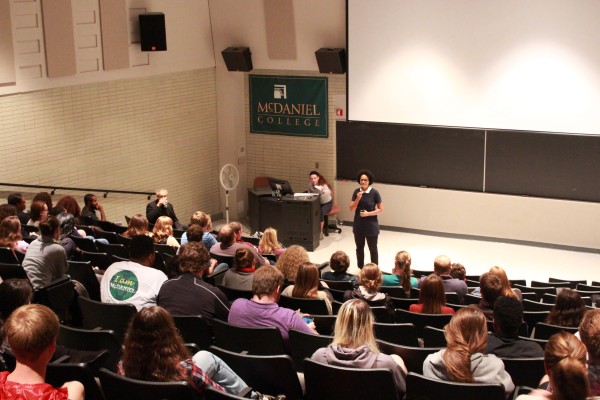 Mo Asumang leading a discussion panel after the documentary. Photo by Jimmy Calderon

“The Aryans” is a 2014 documentary by Mo Asumang. In this documentary, Asumang, an Afro-German film director, gets to the heart of right-wing movements worldwide and their completely wrong interpretation of “Aryanism”.

The term “Aryanism” became a vital part of the Nazis’s ideology after French philosopher Arthur de Gobineau established it as a term for a tall, blond and blue-eyed master race. Up to this day, the term still promotes hate and inspires criminal, sometimes even murderous, acts. 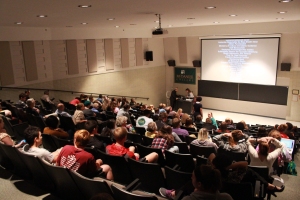 Discussion panel after the documentary screening. Photo by Jimmy Calderon

Mo Asumang sets out in a journey to the abyss of the political evil in Germany and the U.S., and travels to where the real Aryans originally came from—an area which nowadays belongs to Iran.

“The Aryans” is a personal journey into the madness of racism during which Asumang meets German neo-Nazis, the leading racist in the U.S., the notorious Tom Metzger, and Ku Klux Klan members in the alarming twilight of the Midwest.

The film has been presented at many international film festivals and has won several awards so far, such as the World Cinema Best Documentary in addition to the World Cinema Audience Award at the Phoenix Film Festival in 2014.

The movie screening, which happened in Decker College Center the evening of September 30, was special due to the fact that the director herself—Mo Asumang—was present after Dr. Mohamed Esa invited her to come. During her visit, she conducted a discussion panel after the movie. 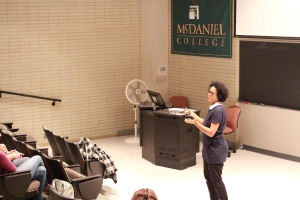 Mo Asumang, producer and director of the documentary “The Aryans.” Photo by JImmy Calderon

Among the many McDaniel students who attended the screening is Mario Fernandez, you expressed his appreciation for the documentary. “I loved it. I could relate to many things in it because I am a refugee and always felt like an outsider.”

“It was a frustrating but enlightening documentary,” states Tabrua Harris, a McDaniel student attending the screening. “The racist groups had no knowledge behind their hate, and it was nice to see Mo Asumang challenge them.”

The documentary was brought to McDaniel by the German Club, which is planning a small celebration for Oktoberfest, date, time, and place to be announced.

The Latin@ Giant: A Presentation by David Romero