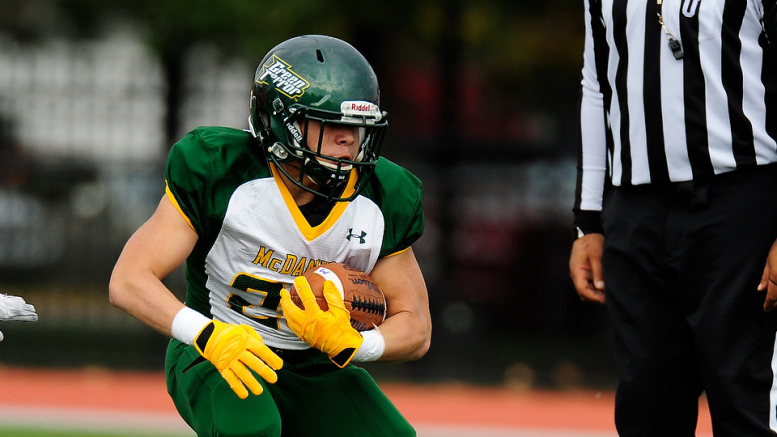 McDaniel dropped their eighth straight game of the season on Saturday, falling to Juniata 20-7.

The Green Terror scored just one touchdown in the second quarter, while the Eagles scored in all but the third.

The Green Terror (0-8, 0-7) were led by Perry Stefanelli who ran for 59 yards and a touchdown, along with 12 yards receiving on two catches. The sophomore’s efforts tied the game in the second quarter before Juniata pulled ahead for good.

Stefanelli worked alongside McDaniel quarterback Will Koester who threw for 233 yards on 23 completions in 46 attempts. Koester was intercepted twice, the second with just a minute left to play, sealing the win for the Eagles.

Juniata (3-5, 2-5) was led quarterback James Dougherty who threw for 84 yards on 7 of 14 passes. He was assisted in the air by Hunter Phillips who caught 67 yards on three receptions.

Running back Matt Lehr totaled 87 yards on 18 rushes with a touchdown.

Juniata opened the scoring with a one-yard run from Deonte Alston at the 7:18 mark in the first to take the lead at 7-0 after an extra point kick from Kevin Bonalle. The Eagles ran the drive on 5 plays for 41 yards in just over two minutes.

McDaniel then tied it up at 7-7 after Stefanelli’s 20 yard run with a kick from Spencer Wiersberg on a drive of 9 plays for 80 yards.

The Eagles pulled ahead again with just 4:41 left before halftime after another one-yard run from Alston. A failed kick from Bonalle left the score at 13-7 going into halftime.

There was no scoring in the third quarter after a McDaniel fumble within the Juniata one-yard line led to a turnover.

Juniata closed out the scoring just like the opened it with a Lehr two-yard run. An extra point kick form Bonalle secured the final score of 20-7 for Juniata’s third win of the season.

McDaniel had one last chance to score in the fourth before an interception from Juniata’s John Michael Maclay sealed the win for good.

Despite the final outcome, McDaniel out-passed and out-ran the Eagles, throwing for 233 yards compared to 131. It was the rushing yards, 168-121 in favor of Juniata, and the five turnovers that decided the Green Terror’s final fate.

McDaniel College will be moving forward with new athletic director